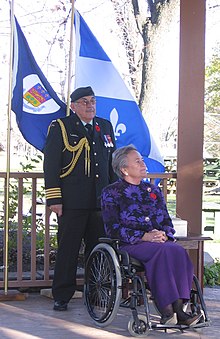 An aide-de-camp with Lise Thibault (2006), then Vice-Governor of Québec

The term has been used in French since the 16th century . The role of (or a) aide-de-camp is usually performed by a younger person who has earned this honorary post through special distinction. She holds a significant position of trust.

The aide-de-camp's job is to act as a link between his superior and the rest of the chain of command. In addition, the aide-de-camp ensures compliance with the protocol . He generally supports his superiors with advice and assistance and takes care of his well-being, e.g. B. by providing drinks or seating.

In some states, the aide-de-camp is purely an honorary title. It is then abbreviated to ADCH (Aide-de-camp honoraire) .

The aide-de-camp usually wears an armpit cord on the right shoulder as a sign of identification for his uniform .