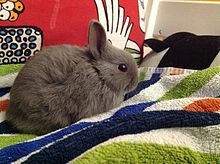 The color dwarfs are a breed of dwarf rabbits . They are 8 to 10 years old.

History of the breed

The color gnomes were first bred in the Netherlands using the ermine rabbit and wild rabbits . The first animals were presented in 1939 by the breeder Hoefmann. Due to the Second World War and the German occupation of the Netherlands, the breeding of the color dwarfs also suffered serious setbacks. It was not until 1955 in Amsterdam and 1957 that color dwarfs were shown again at exhibitions. Color dwarfs had been introduced to Germany as early as 1939, but due to the fact that the Reichsfachgruppe Rabbit Breeders eV had already focused in 1936 on the pure economic viability of rabbit breeding (goal of self-sufficiency in the context of war preparations) and the outbreak of the Second World War, none came to light here either Evolution of the breed. It was not until 1948/49 that dwarf rabbits appeared again in West Germany and were recognized in the standard in 1956.

In the GDR , due to the separation of Europe, the procurement of dwarf rabbits from the Netherlands or the Federal Republic was difficult or even impossible. Therefore, there was the independent outbring of colored dwarfs, also using red-eyed ermine rabbits and wild rabbits .

The color dwarfs are one of the most popular rabbit breeds today, both among pedigree rabbit breeders and pet owners.

The characteristic body shape, which is different from the other rabbit breeds, with the rounded, compact body, the short, small legs and the relatively large head with the large eyes and the closely spaced short ears of the color dwarfs, is caused by the so-called dwarf factor , as in the ermine rabbit . The weight of the colored dwarfs is ideally between 1.1 and 1.35 kg, animals that weigh under 1.0 kg or over 1.5 kg are excluded from the evaluation at breed rabbit shows.

In the meantime, a large number of color varieties are recognized and more are constantly being presented as new breeds. In principle, it can be said that every color that exists in the larger rabbit breeds is bred as a color dwarf, at least on a trial basis. For the breeding of dot piebald dwarfs see genetics of the house rabbit .

Color dwarfs often have a genetic misalignment of the incisors (brachygnathia superior). If the upper jaw is bred too short, the lower incisors stand in front of the upper ones, so that the teeth cannot wear out evenly. In such a case, the incisors must be shortened regularly, otherwise the rabbit will no longer be able to take in food. Shortening should be done by the vet with a cutting disc; shortening with pliers is not advisable as the teeth can splinter. These animals are excluded from the evaluation at exhibitions. If this error occurs, attention must be paid to the consistent selection of the breeding animals.