from Wikipedia, the free encyclopedia
This is the spotted version , flagged on July 17, 2020 . There are 2 pending changes that have yet to be viewed.

This article deals with the maid as a housemaid. For the chambermaid see maid , for the Arabic first name see maid (name) , see also: The maid's report , lazy maid , the maid as mistress , she is dear to me, the valued maid , Elsi, the strange maid , the maid of Heiligenblut , Mary the maid or the faithful maid . 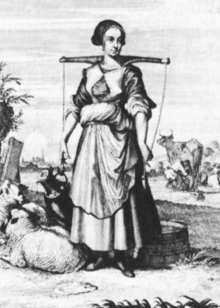 A maid is a female member of the servants and the female counterpart of the servant . In the rural area was measured at several maids on a farm between the Großmagd and Kleinmagd distinguished. In German-speaking countries, the term is not out of date, but it is rarely used with a contemporary reference, as the job it is about (worker in agriculture) has become rare.

Originally, maid meant something like Maid , an unmarried (young) woman, compare the attribute "the pure maid" for the Virgin Mary ; accordingly meant her youth in the elevated language until the 20th century virginity .

In a figurative sense z. B. the philosophy understood as the "maid of theology ".