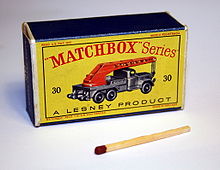 Matchbox box of a KW model

The Magirus-Deutz Uranus was a truck model from the German commercial vehicle manufacturer Magirus-Deutz in Ulm. With 250 hp from an air-cooled V12 engine from Klöckner-Humboldt-Deutz , the Uranus was the most powerful truck produced in Germany of its time.

The heavy, three-axle vehicle came onto the market in 1954 as the "A12000 Uranus" and served as a chassis for fire brigade and military crane trucks as well as for heavy tractors. There were also variants as a tractor unit and dump truck , mainly for export .

Production ended in 1975. A total of around 1570 pieces of the A12000 Uranus or 250D25 were made. The main customers were the fire brigade and the military. Numerous vehicles still exist in classic car collections today .