The title of this article is ambiguous. For the shopping center of the same name in Montpellier in the south of France see Odysseum (Montpellier)

General view of the Odysseum 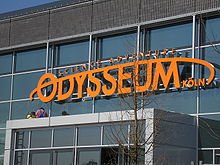 The Odysseum in Cologne is a science center designed as an “experience house of knowledge” and opened on April 3, 2009 in the Kalk district of Cologne, not far from the Bürgerpark.

The Odysseum Cologne sees itself as a place of knowledge communication and takes up the metaphor of the odyssey as a journey. Human development is seen as a journey with an open ending, science as progress and a problem. At the same time, the challenge of shaping the future is the subject of the Odysseum's themes.

It is an adventure museum in which knowledge about shaping the future can be experienced. With exciting adventure stations on around 5,500 m², spectacular programs and fascinating discussion forums, science is made accessible to the general public. Its subject areas are completely scenographically implemented. Most of the experience stations were newly developed for the Odysseum, so that the permanent exhibition has a lot of content that cannot be seen in any other comparable facility.

The decision to build the Odysseum was made on April 30, 2004 after funding was secured by a grant from the state of North Rhine-Westphalia. The sponsor is the SK Foundation CSC - Cologne Science Center , a foundation of the Sparkasse KölnBonn (formerly Stadtsparkasse Köln and Sparkasse Bonn). In the form of a permanent exhibition of 200 exhibits on 14 future-relevant topics, science should be made tangible in three themed rooms and an outdoor experience area.

The knowledge adventure park was built according to plans by the Cologne architect Kaspar Kraemer , decided after an architectural competition. The managing directors of the SK Foundation CSC were the former Cologne alderman Andreas Henseler and the former scientific director of the foundation, Armin Frey (July 1, 2009 to June 30, 2012). The managing director is currently (2016) Andreas Waschk. The Odysseum Cologne is managed by Explorado Operations Köln GmbH . Overall project management and project control of interior construction were the responsibility of AWC AG in Cologne . Drees & Sommer Cologne was responsible for building construction project management.

The foundation stone for the science museum on the site of the former chemical factory Kalk was laid on March 20, 2007 by NRW Prime Minister Jürgen Rüttgers (CDU), ex-Mayor Josef Müller , architect Kaspar Kraemer and Gustav Adolf Schröder , the then chairman of the Sparkasse KölnBonn . After two years of construction by the general contractor, MBN Bau Köln GmbH , the Odysseum was opened on April 3, 2009.

Today (2017) children from 4 years and adults can get to know science and technology in a playful way. The 150 adventure stations include a flight simulator, an astronaut trainer, but also a high ropes course and a climbing wall .

The museum with the mouse

Since October 3, 2013, the Odysseum has been home to “The Museum with the Mouse”, which was designed and implemented in cooperation with Westdeutscher Rundfunk . The factual stories of the show are brought to life with the mouse on around 800 square meters .

As an extracurricular learning location, the Odysseum offers a museum educational program for schools and daycare centers: In CleverLabs , experiments are carried out with the help of computer and show technology.