The relativity of simultaneity is a statement of the special theory of relativity . It states that there is no answer that is equally valid for all observers to the question of whether two events take place in different places at the same time or at different times .

Simultaneity is a fundamental term in physics. All statements about time sequences are based on time comparisons and thus on the term simultaneity. An observer can easily see at any time whether two events are taking place in his immediate vicinity or not. For more distant events, this is not necessarily the case.

In the context of Newtonian physics , it seems possible to define a uniform time system that applies to the entire universe . This means that two observers may measure different times for certain events, but that these times can be clearly assigned to one another, so that it is clear which events take place at the same time and which do not, regardless of where these observers are located and in what way they move. In this context, one speaks of an “absolute” time. If there were an absolute time, all observers would also agree on the sequence of events. In particular, they would have the same idea of ​​the past, present and future. Only in the special theory of relativity is the existence of a universally valid time - and thus a universal understanding of simultaneity - refuted.

Observers moving against each other disagree as to whether two events are simultaneous or not.

The starting point for the special theory of relativity is the fact, confirmed by numerous observations, that the measurement of the speed of light in every inertial system and under all circumstances always delivers the same value. One speaks of the "invariance of the speed of light". With this assumption, we carry out the following thought experiment : A train drives through a station at high speed. A flash of light is now triggered on the train in the middle between two clocks A1 and A2 that are carried along, with the respective clock starting to run when the flashes of light arrive at the clocks. Since the speed of light in every inertial system is the same in all directions (see above), a passenger of the train, i.e. an observer in the rest system of the train, will later find out by comparing the clocks that A1 and A2 were reached by the flashes of light simultaneously and that both clocks thus began to run synchronously. From the point of view of an observer in the rest system of the train station, the sequence of events is different. In order to be able to precisely determine the time of the arrival of the flashes of light at A1 and A2, he has attached clocks that are synchronized with light signals and equipped with sensors on the platform. For this observer, the train is moving at high speed (in the figure, passage from left to right). From this it follows that the lightning has to travel a longer distance to A2 than to A1, because A2 is moving from the point from which the lightning started, whereas A1 is moving towards this point. The clocks attached to the tracks will therefore indicate that A1 was struck by lightning before A2 and began to run earlier. From the point of view of the station's rest system, A1 and A2 are therefore not synchronous.

Causality as well as future and past in the Minkowski space 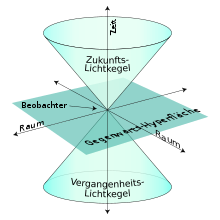 Cones of light in a space-time with two spatial dimensions.

Under causality refers to the unique relationship of cause and effect. An event can only be the cause of a second event if it occurs before it. However, since the sequence of events depends on the observer (or on his state of motion), this could lead to problems with causality. Because if event A occurs before event B in one reference system, but event B before event A in the other reference system, then it follows that both A could be the cause of B and B could be the cause of A. This allows paradoxes to be constructed in which an event hinders itself retrospectively in the past. In addition, time travel with faster than light speed would be possible. One travels from A to later event B. Then through normal acceleration one changes to a reference system in which A takes place later than B. Then one again travels at faster than light speed from B to an event in front of A. This is one of the reasons why it is generally assumed that faster than light speed is not possible.

The speed of light represents a maximum speed, and space-time is divided into three areas: From the point of view of an observer, there is a future that can be influenced by him, a past whose effects affect him and an "elsewhere" with which he is not causal Relationship stands. These three areas are separated from each other in the Minkowski space by the double cone of light . Since the speed of light is invariant, the assignment of events to one of the three areas is the same for all observers. This means that although different observers can assess the simultaneity and sequence of certain events differently (namely when one of the events is in the other's elsewhere), they always agree on the causality. Whether an event A can be the cause of an event B does not depend on the reference system of the observer. In this respect, it is correct to speak of an absolute future and an absolute past, even if there is no absolute present, except in the “here and now”.

The space-time point of the observer (“here and now”) is denoted by A in the following. Any second event with B. The following statements about these two events are valid:

Spacetime from the perspective of an accelerated observer.

The animation on the left demonstrates how the Minkowski space-time presents itself to an accelerated observer. The dotted line represents the world line of the observer, who is always in the middle of the picture. The thick points mark equal (proper) time intervals. Expansion and compression of the world line show the observer's acceleration in the direction of movement, curvature acceleration across it. The diagram shows the world at any point in time in the inertial system , i.e. from the point of view of the observer. With the accelerations one can observe that points of space-time run upwards , thus against the "flow of time". However, they never cross the cone of light (the diagonal lines) from below; Due to the passage of time, this is always only crossed downwards . Thus, a point can never enter the forward light cone (one cannot move an event into the absolute future through acceleration) and never leave the backward light cone (one cannot extract events from the absolute past through acceleration).

You can also see that the world line of the observer always runs within the light cone. Events that reach or have reached the observer always lie in his or her absolute future or past; the order of these events cannot be changed by acceleration. In particular, the observer cannot turn past events into future events.

The relativistic effects of simultaneity do not play a role in everyday human experience: even if one were to stand on Mount Everest and look out to sea, the relativity of simultaneity would be limited to a range of a few milliseconds for the entire visible area of ​​the earth's surface up to the horizon. This time interval lies below the threshold from which people are even able to resolve the sequence of events, and below the threshold from which people can perceive optical properties as non-simultaneous. For everyday experience, the light is always infinitely fast and the simultaneity is well-defined.