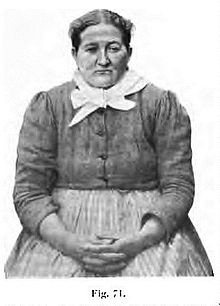 The Szondi test (after its inventor Leopold Szondi ) is a depth psychological test for diagnosing the drive structure in the sense of the analysis of fate . It is a projective test and is based on portraits that are to be classified according to sympathy and antipathy . As is usual with projective tests, the validity of the test procedure cannot be empirically verified. The Szondi test is intended to show the subconscious needs but also the character traits and personality structure of the test person. The test is mainly used in professional and career counseling, but also in fate-analytical psychotherapy .

The test includes six series of photographs, each consisting of eight individual images. You are asked to choose from the available eight pictures those that appear to be the most likable and the most unsympathetic.

First of all, the person being tested selects the most likable and most unsympathetic portrait from a series of images (predecessor profile). The selected portraits form the material for further series of selections, in which the most likable and the most unsympathetic are selected again (rear-viewer profile). Leopold Szondi collected the people pictured over many years in psychiatric clinics. Through his choice, the person tested shows his sympathy or antipathy for the instinctual structure of the people depicted.