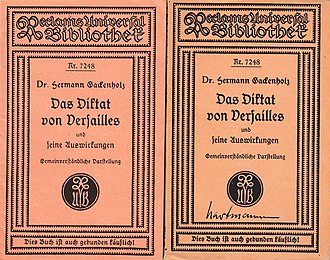 As Tarnschrift a literary work is known that the actual author veiled or the basic content of the work.

In particular, works were published under camouflage for which the author or the content of the work were under censorship . In order to circumvent the censorship, the content and / or the author of the books, writings or other works was falsified. For example, during the National Socialist era, texts by the Nazi-critical writer Thomas Mann were inconspicuously enclosed with the Lyon's Tea brand .

Furthermore, building instructions for radio receivers were distributed in a similar way , with which it was possible to receive enemy transmitters . Other examples that fall under the term camouflage were tips that were distributed to simulate illnesses with which one could evade military service in World War II .

Camouflage letters were often distributed with harmless envelopes in which the actual content was not recognizable.