Berlin and the surrounding area 1885

In 1920, Berlin , seven other municipalities, 59 rural municipalities and 27 manor districts formed the then newly formed urban municipality of Greater Berlin with 3.8 million inhabitants. The forerunner of the union was the Verband Groß-Berlin , also: Zweckverband Groß-Berlin , which existed from 1912 to 1920. The greatest and lasting achievements of the association are the permanent forest contract for the purchase of large forest areas, also outside of Berlin in Brandenburg , as well as the preparatory measures to merge the numerous tram companies into the Berlin tram .

The Berlin region, which was growing rapidly after industrialization, urgently needed a coordination of the transport network, construction planning and open spaces at the beginning of the 20th century. Trade, industry and handicrafts complained about an escalating conflict of competence among the many authorities. With the special purpose association law for Greater Berlin of July 19, 1911, which came into force on April 1, 1912, the independent cities of Berlin, Charlottenburg , Deutsch-Wilmersdorf , Lichtenberg , Neukölln , Schöneberg and Spandau as well as the districts of Niederbarnim and Teltow became one Zweckverband with 4.2 million inhabitants on an area of ​​around 3500 square kilometers. The association should perform three tasks:

A political background was the attempt by the Prussian state to master the newly created special purpose association law of the major infrastructural problems of the metropolis of Berlin, without any increase in power of an actual union. The strengthening of the liberal and left currents feared by the merger should be prevented in this way. The Kunstgebilde Zweckverband, which also lacked administrative power, was nevertheless able to demonstrate sustained success in two of the three areas of activity: In the area of ​​open spaces, larger forest and lake areas could be sustainably secured with the permanent forest contract . The association also acquired several tram companies, including the Great Berlin Tram (GBS) as the largest company in Germany, which became the property of the City of Berlin in 1920 and could thus be merged.

Success of the association: purchase of the Parforceheide

The preservation and expansion of the Berlin forests took place for health-political reasons, furthermore to secure the water supply of the agglomeration and to curb the rampant speculation with forest areas at that time. The considerations were reflected in the so-called ' permanent forest contract ' from 1915 between the Zweckverband and the Royal Prussian State for the acquisition of around 100 km² of forest area - also outside Berlin in Brandenburg - for 50 million gold marks . Today's city of Berlin, which emerged from the Zweckverband five years later, entered the contract as legal successor. "After all, it is a lasting merit of the Zweckverband that Berlin - compared to other megacities - has forest areas of unique extent."

Merger of the tram companies 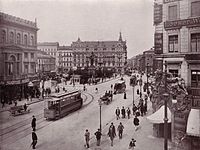 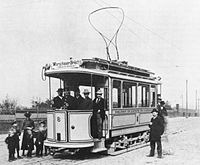 In operational terms, the fragmentation turned out to be a problem, since the GBS and its branch lines (above) ran with roller pantographs, the other railways (here the flat runway) but with bow-type pantographs.

When the Zweckverband began its work in 1912, there were 16 different tram companies in the association's area, and two more were added in 1913. Eight of them were privately owned, the rest were owned by the municipalities and the Teltow district. The Berliner Elektro Straßenbahnen AG (BESTAG) was officially a private company, but was majority owned by the City of Berlin. Not included in the following list are the still independent tram companies in Potsdam , Schöneiche near Berlin and Woltersdorf .

A total of around 150 individual contracts regulated matters between the railways and the communities they touch, 125 of which were with GBS and its branch lines. These were now transferred to the association. On July 17, 1916, he published a memorandum in which he examined the treaty and suggested guidelines for the standardization of Berlin's transport system. The association also recommended the acquisition of the Great Berlin Tram at an appropriate time. The association began negotiations on this after the Reich Traffic Tax Act came into force in February 1917. The law provided for a tax of twelve percent on the fare income in passenger and freight traffic. The association achieved a reduction in the major Berlin means of transport to six percent, but not their complete abolition. A tariff adjustment was therefore inevitable, as the law allowed transport companies to pass the tax on to passengers. In the event that the parties involved - the association and the transport company - could not agree, an arbitration tribunal should have the last word. This case came about immediately, as the GBS provided for the 10-pfennig standard tariff to be raised by five pfennigs, which the association refused. The arbitral tribunal also rejected this tariff. As a result, both sides negotiated a new collective agreement in a lengthy process.

On May 28, 1918, the collective bargaining agreement - also known as the standard agreement - significantly strengthened the association vis-à-vis the railways. Although these achieved an increase in the standard tariff to 12.5 pfennigs, this now applied across the board for all five companies. Connection tariffs, which the GBS had levied on routes through several traffic areas, were a thing of the past. The companies also committed to expanding their network by five kilometers each year. In addition, they should pay one eighth of the fare income into a fund to be set up by the association, from which the construction costs should then be partially or fully paid off. The companies were required to post timetable notices and line signs at the intermediate stops and to erect waiting halls in isolated cases . The association was granted the right to request the establishment of new lines and the strengthening of existing ones; it also had the right to participate in setting the timetables and the right to propose four seats on the GBS supervisory board. He also got a greater share of the company's net profit than before.

After the contract was signed, the branch lines were to merge with the Great Berlin Tram. The requirements for the acquisition of this railway by the association have been changed compared to the last approval agreement from 1911. With the exception of local regulations such as pavement maintenance, street cleaning, etc., the contracts that had been in effect until then were canceled. A short time later, similar contracts followed with BESTAG, the Berlin Ostbahnen and the Cöpenick urban tram.

At the beginning of 1919, the association set up a special committee to examine the purchase of the Great Berlin Tram. This was preceded by a wage increase for the tram operators and a temporary wage increase to cover the costs. Since, contrary to expectations, the economic situation of GBS did not improve, the association had a favorable opportunity to acquire it. The decision on this was made by those responsible on June 4, 1919, which was followed by negotiations with GBS - especially about the purchase price. Before that, on May 15, 1919, the branch lines in the GBS went on; accounting was retrospectively standardized as of January 1, 1918. On July 15, 1919, the Greater Berlin Association then bought the Great Berlin Tram as a whole, including assets, rights and liabilities, for a total of 137.5 million marks. The payment was made in nominal four percent bonds from January 1, 1920 to December 31, 1949. Two months later, the association also acquired the Berliner Ostbahnen at a price of 6.45 million marks. On September 20, 1919, the Große Berliner Straßenbahn AG was deleted from the commercial register and at the same time the Große Berliner Straßenbahn was entered as a municipal company . The Berlin Ostbahnen were incorporated into it on May 1, 1920 as an operating part.

When the Greater Berlin Act came into force on October 1, 1920, the Great Berlin Tram became the property of the City of Berlin, as did the (formerly) urban trams of Spandau and Cöpenick and the trams of the Heiligensee an der Havel community . The last two were incorporated into the GBS on the same day, the Spandau tram followed on December 8, 1920. Five days later, the merger of the urban trams , the Berlin electric trams and the great Berlin tram resulted in the Berlin tram , which is the largest in one unit represented the guided tram operation of Germany. The Teltower Kreisbahnen and the Steglitzer tram operated by it were added in April 1921, followed by the Schmöckwitz – Grünauer Uferbahn and the Flachbahn in 1925 and 1928, respectively . The Schöneicher as well as the Woltersdorfer trams remained independent, as their administrations according to the Greater Berlin Act were still outside the borders of Berlin, although their routes touched the city area. The Berlin tram (from 1923: Berliner Straßenbahn-Betriebs-Gesellschaft ) itself merged with the Hochbahngesellschaft (subway) and the ABOAG (omnibus) in the Berliner Verkehrs-Gesellschaft (BVG) in 1929 .

With the proclamation of the republic after the November Revolution of 1918, the way for Berlin to grow together was also politically free, and the Zweckverband dissolved. The law on the formation of a new urban community Berlin ( Greater Berlin Law ) of April 27, 1920 regulated that the communities or estate districts listed by name, "as far as they belong to the districts of Teltow , Niederbarnim and Osthavelland and the province of Brandenburg , from these Associations from [divorce] and […] form the new city of Berlin ”.

Today's districts such as Charlottenburg , Wilmersdorf or Schöneberg only came to Berlin at this point in time. Old Berlin with around 1.9 million inhabitants essentially comprised today's districts of Mitte and Friedrichshain-Kreuzberg (excluding Stralau ) as well as the Prenzlauer Berg district . While the population doubled to about 3.8 million, the area verdreizehnfachte from 66 to nearly 880 square kilometers - still has the precincts of Berlin received in its broad strokes like that.