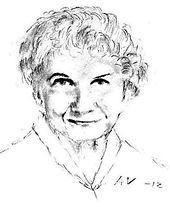 Zug (in the original Train ) is a short story by Alice Munro from 2012 in which one of the topics is dealing with asexuality .

The soldier Jackson Adams returns to Canada disoriented from World War II . He transforms a mishap on the train journey into the opportunity to work as a private craftsman for Belle in her house, which he believes is in a desolate state. When he had to take Belle to a hospital after years, he looked for a new job as a caretaker in town, where he met his sexual past in the person of Ileane, but with whom he did not make contact. Jackson is shown pictures from his time with Ileane before he became a soldier, and he takes another train soon after.

The story is largely told from Jackson's perspective. Belle tells him in detail about her life and Jackson is portrayed as a listener who mostly drifts away, but still feels when a topic gets too close to him, sexual for example. He may then break off contact, including the one with Belle and previously with Ileane.

Alice Munro herself gave a brief description of this work. It's about the man who is confident and satisfied as long as sex is left out. She believes that a rowdy woman tormented him in his youth. And Munro thinks that there is nothing he can do about it and that he has to flee all the time.

Train is included in Dear Life (2012), Alice Munro's fourteenth and most recent collection of short stories published in German entitled Liebes Leben (2013). Train is 40 pages long in the volume Dear Life and is the more elaborated version of the story Train published in Harper's Magazine in the April 2012 issue , a version that can be read online free of charge.

The two versions of the narrative differ in that there is a different division of the 16 and 17 sections and the second version is longer overall, because certain characteristics of both main characters or the psychological setup in Jackson's youth have been more clearly worked out in new sentences or paragraphs. In the eleventh section, the perspective of the residents of the residential complex where Jackson Adams works as the caretaker has been changed. The last sentence of the story was only added in the second version.

V - D
Works by Alice Munro
The titles of the works are given in English if the work is not available in German or the title has not yet been found.