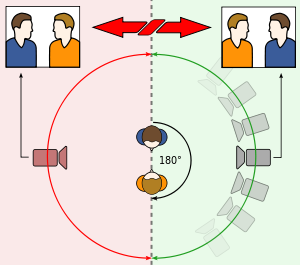 This illustration shows the axis between the two people and the 180 ° bend on which cameras can be placed (green). If there is a cut between the green and the red arch, the people on the screen seem to swap position and direction of view.

An axis jump is a film cut with which the relationship axis of the characters or groups is skipped. Lines of sight or relationships between the actors or the protagonist's point of interest form an imaginary line. Projected onto the screen, this line represents a “left-right” and “top-bottom relationship” between the actors. Axis jump is used to describe a section in which this relationship is reversed. It is between the side axis jump and the vertical axis jumpdistinguished. The latter is perceived as less disorienting by the viewer, since the screen is less high than it is wide. An axis jump can cause disorientation in the viewer, since the arrangement and direction of view of the actors in the frame seems to change relative to the viewer.

Action axis (plot axis) is the imaginary line in the direction of which the plot or the inertial system of the film world moves. When driving a car, for example, the action axis is so strong that the relationship axes lose their importance. The orientation is retained despite a possible axis jump. When filming from the driver's side, the landscape appears to move from right to left; if you film from the passenger side, it apparently moves from left to right. However, this change in direction of movement is not irritating. Similarly, two cars that drive in the same direction in a parallel assembly (often from left to right because that corresponds to our reading direction) are perceived as following one another; however, if one goes left to right and the other goes right to left, the spectator expects a collision.

In the continuity editing of classic Hollywood cinema, the axis jump is viewed as an error and accordingly avoided.

The principle of avoiding axis skips is called the 180 degree rule .

In some cases, a conscious shift in axis can also be a stylistic device, for example to symbolize confusion or a moment of tipping; Stanley Kubrick is mentioned frequently in this context. Axis jumps are often used in commercials to create a rapid effect. A scene from Lord of the Rings in which Sméagol speaks to himself is also known. Since he speaks alternately with the cuts from one side to the other (axis jump), the impression of two people looking alike is created, which underlines the split character of the figure.

In contrast to the axis jump, this is a movement of the camera ( steadicam or a dolly ride ) over the axis or a change in the movement axis or the direction of view of the figures , whereby a new axis is defined. The change of axis is not perceived as annoying by the viewer because the movement is flowing. This movement is sometimes referred to as a crab. In addition, an intermediate cut to a long shot can make it possible to cross the axis, as this makes the spatial arrangement of the actors clear to the viewer, or the intermediate cut to a close-up , as the viewer then re-orientates himself spatially.

Axes in the film