Stanley Kubrick in a self-portrait (1949)

Stanley Kubrick ([ ˈkuːbɹɪk ]; born July 26, 1928 in New York ; † March 7, 1999 in Childwickbury Manor near London ) was an American director , producer , screenwriter and photographer . His films are primarily praised for their deep intellectual symbolism and technical perfection. Kubrick tried to explore the medium himself, analytically breaking down each genre to put its constituent parts back together into something new. But the director was also notorious for perfecting every scene down to the smallest detail, taking the actors to their psychological and physical limits. His films oscillate between order and chaos and thus result in a cinematic conditio humana .

Her main themes are the inaccessibility of reality and the failure of humanity, expressed by simply accepting, ignoring or wrestling the protagonists with their dark, inner forces or drives. Authenticity, coldness, honesty, reality, dream, urges are the most important keywords in connection with Kubrick's works. Filmmakers and critics consider him one of the most important filmmakers of all time, although he never received an Oscar for best director.

In this section some biographical details are given that have not been documented. 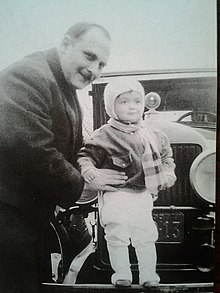 Kubrick with his father Jacques

Stanley Kubrick was born in New York on July 26, 1928 and was the first of two children. His parents, Jacob Leonard Kubrick (1902–1985), a surgeon, and Sadie Gertrude Kubrick (née Perveler; 1903–1985), came from Jewish families; all of their grandparents had immigrated from Austro-Hungarian Galicia . In 1934 Kubrick's younger sister, Barbara Mary, was born.

Kubrick's photo of Chicago posted in The Look

His early passions were excessive reading, cinema and chess. From 1941 he attended William Howard Taft High School in New York City, where he was a photographer for the school newspaper. After graduating from school, he began his career as a photographer. After initially selling amateur photos to the New York magazine Look , he got a permanent position there at the age of 18. A photo story that he wrote about a boxer led him deeper into the subject matter.

As a photographer, he was familiar with investigative reporting ; accordingly, in 1950 he directed his first documentary Day of the Fight , a sensational study of individual performance in the boxing ring, although it was only 16 minutes long. Motivated by the success and recognition he had received from his first work, he then shot the documentary Flying Padre and the union advertising film The Seafarers .

His first feature films, Fear and Desire (1953), an allegorical, temporally and geographically indefinite war drama, and The Tiger of New York (Killer's Kiss) (1955), however, already attracted Hollywood's attention . The Tiger of New York is Kubrick's last film with a happy ending . Against Kubrick's original intention, the production company United Artists , which bought the film for US $ 100,000, claimed that the plot would end well. Later, the studios gave him almost unlimited free rein. Only with his last film, Eyes Wide Shut , is the ending open and ambivalent again .

Film connoisseurs, he was with the classic film noir The Killing (The Killing) a term before him with Paths of Glory (with Kirk Douglas succeeded in the lead role), the final breakthrough. The during the First World War, playing film Paths of Glory (original title: Paths of Glory ) deals with the cruelty and senselessness of war only in passing. It is definitely an anti-militarist film, but above all a bitterly angry parable on structures of power and a commitment against the death penalty .

Almost all of Kubrick's essential stylistic elements can be found in these films: the camera alternating between distance and involvement, which seems to be more interested in the course of action than in the subjects' motives; the reduction of characters to pawns on a symbolic chess board ; the emotional and moral equanimity of the narrative. According to his own statements, the passionate chess player Kubrick planned many films and the characters involved in analogy to the conflicts and movements on a chessboard. Again and again one sees checkerboard patterns as flooring in his films, as is the case in the French castle where the road to fame plays, where the soldiers often look like life-size chess pieces.

Kirk Douglas , lead actor and executive producer of the monumental film Spartacus , hired Kubrick as a director after the original director Anthony Mann was fired after a few days of shooting. The film became a box office hit, which provided Kubrick with the funding for his subsequent films. However, he himself was very dissatisfied due to his little influence on the script and production conditions, which is why he described Spartacus as a "necessary evil". Kubrick made up his mind never to make a movie again without having full control over the production from scriptwriting to editing. He left the Hollywood system and remained for the protagonists there until the end of his life a publicly shy outsider.

Retreat to England and the first Kubrick films 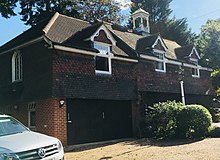 Stanley Kubrick's guest house in Abbots Mead, Borehamwood , where he edited his most important films

From 1948 to 1955 Kubrick was married to his childhood sweetheart Toba Metz, and from 1955 to 1957 to the Austrian ballet dancer Ruth Sobotka. While filming Paths to Fame , he met Christiane Harlan , whom he married in 1957. Together with her, the two common daughters Anya Renata (1959-2009) and Vivian (* 1960) and his stepdaughter Catherine (* 1953), he moved to England in the early 1960s where he initially settled near the Elstree Studios in London down; he later bought Childwickbury Manor in the St. Albans District, where he set up studio and editing rooms in the former stables. For the press and in Hollywood he was considered someone who lived extremely withdrawn; However, acquaintances said that he spent most of his time in the vicinity of family, friends and acquaintances.

His first film shot in England was Lolita (1962). Kubrick worked closely with Vladimir Nabokov , the author of the novel of the same name. The several hundred pages long screenplay, which Nabokov wrote himself, changed Kubrick decisively so that the act, which was received as a scandal book, could be filmed without the film ending up on the index worldwide. While working on Lolita , the director discovered the actor Peter Sellers . Sellers disguises himself to deceive Humbert already in Lolita in his role as Quilty as the school psychologist Dr. Zemph.

Equally famous were his two following films in 2001: A Space Odyssey (1968) and A Clockwork Orange (1971). All three films provoked heated public controversy through an ironic theatricalization when they were released and are still discussed in film studies , both in terms of themes and plot as well as the symbolism they contain.

In contrast, his 1975 film Barry Lyndon based on the novel by William Makepeace Thackeray (1844) was a commercial failure. To make the beauty of baroque painting and music tangible on film and to authentically reproduce the life of that time using a fictional biography of Barry Lyndon, through natural candlelight in all indoor shots, did not bring any success at the box office. However, the film influenced other directors who later also devoted themselves to the subject, from Peter Greenaway ( The Draftsman's Contract ) to Lars von Trier ( Dogville ) to Peter Webber ( The Girl with the Pearl Earring ) and Yorgos Lanthimos ( The Favorite )

After Barry Lyndon , Kubrick's production pace decreased. In the last 25 years of his life he produced three other films. However, his fame and the "mystery" surrounding him were so great that every release worldwide was received with great expectations. More important for Kubrick and probably unique in the history of Hollywood was that he was given a largely free hand and an almost unlimited time budget for each film from the big studios.

With Jack Nicholson , Kubrick directed the film Shining (1980), an adaptation of the book by Stephen King . King fans in particular were dissatisfied with the film, although Kubrick literally unleashed floods of blood as he took great liberties with the plot of the book. The focus of the film is the design of a luxurious modern space. In the film, history becomes the eternal return of the same: the violence that no order can withstand. King himself described Kubrick's Shining as the worst film adaptation of one of his books. Although not as enthusiastically received by contemporary critics as earlier works, Shining is now considered a classic of the mystery thriller .

The film Full Metal Jacket (1987), set in the Vietnam War , was Kubrick's only film that came too late in his opinion. Despite the strictest secrecy, the subject became known to the public shortly before the film was finished. As a result, Oliver Stone finished his film Platoon faster than planned and released it a few weeks before Full Metal Jacket . In Germany, the film premiere of Full Metal Jacket was half a year after that of Platoon .

After Kubrick completed Full Metal Jacket , he worked on a film adaptation of the novel Lies in Times of War by Louis Begley and the science fiction story AI under the working title Aryan Papers. When Steven Spielberg published Schindler's List in 1993 , Kubrick abandoned his Aryan Papers project so as not to get into a situation similar to that which had arisen with Full Metal Jacket . The project was already well advanced and shooting was about to start. He assumed that audiences would probably not want to see another film on the Holocaust for the foreseeable future . He initially continued to work on AI and at the same time began work on a film adaptation of Arthur Schnitzler's dream novel , which he had been planning since the late 1960s. Finally, since he feared that the story of a robot who wants to become a real person might become too philosophical in his hands, he entrusted the project to Steven Spielberg and from then on devoted his full attention to editing the dream novel . After two years of shooting, Kubrick presented the cut version of the film adaptation on March 5, 1999 under the title Eyes Wide Shut (1999). During this time, a con man named Alan Conway posed as Kubrick while the real Kubrick was busy filming. This story was filmed in 2006 under the title Color Me Kubrick with John Malkovich .

On March 7, 1999, Stanley Kubrick died in his home of complications from a heart attack. 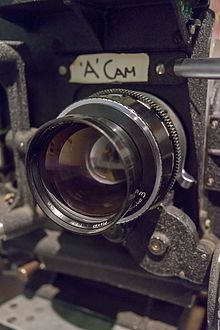 One of the Zeiss lenses used in the Barry Lyndon movie . Originally developed for NASA by Carl Zeiss .

Kubrick was famous and infamous for repeating each scene so many times that it was perfect in his eyes. A famous example is a scene from his film Shining in which Shelley Duvall finds a stack of over three hundred sheets of paper with the same sentence repeatedly written on it: All work and no play makes Jack a dull boy . Kubrick refused to make copies of each page, even if it was impossible to see clearly. Several scribes were busy typing every page in the original. In the making-of for the film Shining , the harshness towards the young Shelley Duvall becomes visible, which Kubrick uses specifically so that she can better empathize with her role.

Kubrick interprets his urge for perfectionism not only as a strength, but also partly as a weakness. His wife said of him that although he did an excellent job, he often worked very slowly. In addition to some unrealized projects, Kubrick got into financial difficulties with Full Metal Jacket ; the film could only be released after platoon . 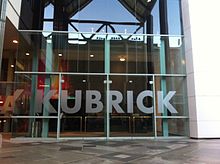