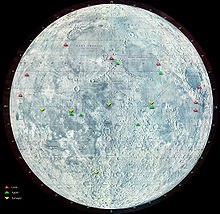 Overview map of the Surveyor, Apollo and Luna moon landings

The term lunar landing designated as part of the space a controlled landing is one of man made missile ( Lander ) on the earth satellites moon . Most often the term is used for the first manned moon landing on July 20, 1969 by Apollo 11 .

Since the 1950s, there has been a so-called space race between the USA and the Soviet Union .

The first man-made spacecraft on the moon was the Soviet Lunik 2 probe , which hit the moon on September 13, 1959. The American missile Ranger 4 crashed on April 26, 1962 on the far side of the moon after a loss of contact. The space probes Ranger 7 , 8 and 9 were able to transmit thousands of images to earth in 1964 and 1965 before their impact (scheduled hard landings ). On February 3, 1966, the Soviet Luna 9 was the first missile to land softly on the moon, and with Surveyor 1 on June 2, 1966, a US probe landed for the first time.

The first manned flight to the moon (without landing on the satellite) was Apollo 8 in December 1968. Frank Borman, William Anders and James ("Jim") Lovell orbited the moon 10 times and were the first people to see the back with their own eyes saw the moon. On July 21, 1969 at 3:56 PM CET entered in the course of the mission 11 Apollo the first humans to the moon, Neil Armstrong and Buzz Aldrin . In the following three years, five more manned moon landings of the Apollo program took place.

Presumably the Soviet Union tried to bring lunar rocks to earth before Apollo 11 . However, this only succeeded with the Luna 16 probe, which landed on September 20, 1970 . The planned Soviet manned lunar program was not implemented.

The People's Republic of China was the third nation to make a soft moon landing; the Chinese probe Chang'e-3 touched down on the moon on December 14, 2013. On January 3, 2019, Chang'e-4 landed a probe on the back of the moon for the first time .

People on the moon

Landing sites of the Apollo missions

A total of twelve American astronauts set foot on the moon between 1969 and 1972.

For the early 2020s, China, South Korea and Japan as well as space companies from several countries are planning unmanned moon landings.

In the USA, NASA's Artemis program is a follow-up project to Apollo that is in preparation for the first landing in 2024 Template: future / in 4 yearswith the Artemis 3 mission . The stated goals are a woman's first visit to the lunar surface and the first manned exploration of the South Pole region . China and Russia are also planning manned moon landings for the 2030s. Both countries are also considering setting up a joint research station on the moon together with the European Space Agency (ESA).

Wikibooks: The Race to the Moon - The Role of Space Travel in the Cold War  - Learning and teaching materials