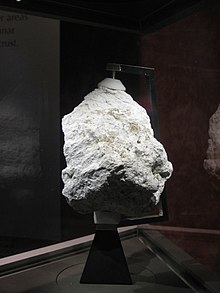 Apollo sample # 60025, collected by Apollo 16 and is currently in the National Museum of Natural History in Washington, DC issued.

Moon rock is rock that was formed on the moon (earth's moon). The term is also used to refer to other materials that have been collected while exploring the moon. 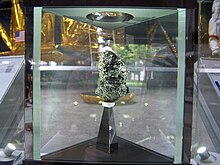 There are currently three sources of lunar rocks on Earth : 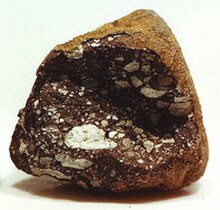 During the six Apollo excursions, 2,415 samples with a total weight of 382 kg were collected, most of them by Apollo 15 , 16 and 17 . The three Luna probes returned another 326 grams of material. More than 90 lunar meteorites were found on Earth by 2006, a total of more than 30 kg of material.

In the Apollo program, lunar rocks were collected using a variety of tools including hammers , rakes , shovels , tongs, and earth drills . Most of these pieces were photographed before they were collected in order to document their found condition. They were packed in bags and then stored in a special container ( Special Environmental Sample Container ) on the return flight to earth to protect them from contamination. At 11.7 kilograms, Big Muley is the heaviest lunar rock sample returned to Earth by Apollo.

Some moondust was also reportedly collected by a Hasselblad employee who cleaned the cameras used by the astronauts after the Apollo missions.

Overall, the rocks collected on the moon are very old compared to rocks found on earth, as has been determined with the help of radiometric dating methods . Even the youngest is older than any rock on earth. The age range extends from 3.2 billion years for the basalt samples from the Maria to 4.6 billion years in the Terrae , they therefore represent samples from a very early period of the solar system.

The rocks have characteristics that are very similar to the rocks on the ground, particularly in the content of oxygen - isotopes terms. However, very little iron is found in the lunar rocks, and they are also poor in volatile elements such as potassium and sodium , and there is no water at all.

Three new minerals were found in the moon rocks : armalcolite , tranquilityite and pyroxferroite .

The determination of the age of about 50 melted rock samples from the Apollo program 1969–1972 gave strong indications of an accumulation of large impacts 4 to 3.8 billion years ago (" Great Bombardment "), as a result of which most of the lunar seas were formed.

Moon rocks collected while exploring the moon are currently considered priceless. In 1993, three small fragments brought by Luna 16, weighing 0.2 g, sold for $ 442,500. In 2002, a safe was stolen from the Lunar Sample Building and contained tiny pieces of material from the Moon and Mars. These pieces were recovered and valued by NASA for trial in 2003 at $ 1 million for 285 grams of material. Moon rocks in the form of meteorites are often sold and exchanged among private collectors, but also at high prices. 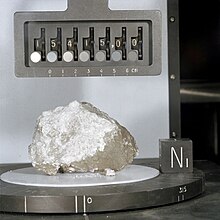 Genesis rock brought back from Apollo 15 .

Examination of a moon rock sample from Apollo 17 . 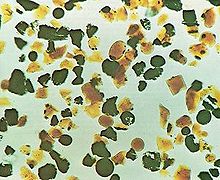 The main repository of the Apollo moon rocks is the Lunar Sample Building at the Lyndon B. Johnson Space Center in Houston , Texas . According to NASA, almost 295 kg of the original 382 kg of the samples are still being stored there untouched. For security reasons, a smaller collection is held at Brooks Air Force Base in San Antonio, Texas . Most stones are kept in nitrogen to protect them from moisture. They are only handled indirectly with special tools.

After the last Apollo mission ( Apollo 17 ), small moon rock samples were poured into acrylic glass . Together with the respective national flag, which was brought to the moon and back by the Apollo astronauts, these samples, known as “Goodwill Moon Rock”, were given away to 135 different nations. At least one of these pieces was later stolen, sold and found again. Some small pieces were mounted on pedestals and given away to former astronauts and other deserving people. Other samples were given to selected museums, e.g. These include the National Air and Space Museum , the Kansas Cosmosphere and Space Center , and the Kennedy Space Center Visitor Center . There it is possible to “touch a piece of the moon”, but in reality it is a small piece of moon rock cemented into a pillar in the middle of a vault accessible to visitors.

In Europe, moon rocks were exhibited for the first time in 1970 in the training center of the Neanderhöhe Hochdahl observatory . Today the moon rock is in the House of History in Bonn (282 g, from Apollo 12 ), in the Rieskrater Museum in Nördlingen (163 g, from Apollo 16 ), in the Technik Museum in Speyer (177 g, from Apollo 15 ) and in German Museum exhibited in Munich . In Austria, a piece of moon rock can be seen in the meteorite hall of the Natural History Museum in Vienna . The last two samples are the aforementioned “Goodwill Moon Rocks” from Germany and Austria. Furthermore, a 160 g sample collected by Apollo 15 can be seen in the space exhibition of the UN Office for Space Affairs in Vienna.

With the initial issue date 1 July 2019 which has German Post AG in the series microworlds a postage stamp in the denomination issued by 80 euro cents, showing a piece of moon rock at 30x magnification. The photographic representation comes from the pioneer of microphotography Manfred P. Kage , the design of the postage stamp from the graphic designer Andrea Voß-Acker from Wuppertal.