This article covers the Texas city of Houston; for other meanings of the same name, see Houston (disambiguation) .

Houston [ ˈ (h) juːstən ] is the largest city in Texas and the fourth largest in the United States , behind New York City , Los Angeles and Chicago .

Houston is located on the south coast of the United States and in the east of the state of Texas directly on the Gulf of Mexico in the Gulf Coast Plain . The city extends over an area of ​​1700 km 2 , 1642 km 2 of which is land and almost 58 km 2 is water. The city itself is in Harris County , but it also includes smaller areas in two neighboring counties, Fort Bend County and Montgomery County . It is connected to the Gulf Coast by the Houston Ship Channel , an ocean-going canal, and the Port of Houston is one of the largest seaports in the United States. The Buffalo Bayou , a nearly 100 km long lowland river with a very low gradient, flows through the urban area from west to east and has a lasting impact on the cityscape. The bayou itself merges into the aforementioned canal in the eastern part of the city and then flows into the gulf.

The city's climate is strongly influenced by the gulf and its location in the subtropical climatic zone . It can be regarded as warm all year round and temperatures rarely drop below 4 ° C. The precipitation, which is particularly noticeable in the summer months through heavy but short rain showers , can also turn into snow in the winter months . Like the entire south coast of the United States, Houston is also in the zone where hurricanes are not uncommon. In most cases, the city was not directly affected. It is usually located on the fringes of tropical cyclones. However, with the most recent, " Harvey " at the end of August 2017, massive rainfall flooded large parts of the city.

In August 1836, John Kirby Allen and Augustus Chapman Allen, two real estate entrepreneurs from New York, bought 27 km 2 of land on Buffalo Bayou with the intention of starting a town. The brothers decided to name the city after Sam Houston , the famous Texas general from the Battle of San Jacinto . On June 5, 1837, she was entered on the register and James S. Holman was elected the city's first mayor. In the same year Houston became the seat of Harrisburg County (now Harris County ) and the temporary capital of the Republic of Texas .

In 1901 oil was found in Spindletop near Beaumont . Together with other oil fields, it fueled the development of the American oil industry. In 1902, President Theodore Roosevelt released a million dollars to build the Houston Ship Channel . It begins at the edge of the Buffalo Bayou watercourse that runs through the city . President Woodrow Wilson opened the new port of Houston some 60 km from the coast in 1914. By 1930 Houston grew to become the most populous city in Texas.

The end of May 2015 saw the heaviest rainfall in Texas since weather records began, and Houston was also badly affected by its low location; a not inconsiderable part of the city was flooded. On August 26, 2017 and in the following days, hurricane "Harvey" (classified in level 4 - the second highest level) hit the mainland near Houston with rainfall of more than 60-80 liters per m² within a few hours. As a result, large parts of the urban area were flooded, many main roads were impassable and parts of the infrastructure collapsed. The mayor of the city refrained from evacuating, however, because "no one had expected such heavy rainfall" and "it would have been a nightmare to send 6.5 million people onto the streets".

The population was over 2.3 million in 2018. This means that it has risen by over 40 percent since 1990. The Houston metropolitan area had 5 million people.

The Houston metropolitan area generated an economic output of 478.7 billion US dollars in 2016. The gross domestic product per capita is 65,332 US dollars. In a 2014 study, Houston was ranked 13th among the economically strongest metropolitan areas in the world and 4th in the United States. The unemployment rate in Houston is 4.2% as of May 2018

Houston is one of the most important ports in the southern United States and is best known for handling oil and oil products. Some of the largest refineries in the state of Texas are located in or near the city.

Several nationally or even globally known companies have their headquarters in Houston.

Houston is conveniently located at the intersection of Interstate 10 and Interstate 45 and has a ring of the two highways that surrounds the city center, the so-called Texas State Highway Beltway 8 . Together with the Sam Houston Tollway , the ring has a total length of about 142 kilometers. A third ring, known as the Grand Parkway, State Highway 99 is currently under construction.

Since 2004, Houston has a running north-south light rail (Light Rail System), the twelve-kilometer downtown stretch of Metrorail Houston Red Line . This extends from the University of Houston Downtown, past the Texas Medical Center to NRG Park. Furthermore, the city has a connection to the rail network of the United States, it is served by the Amtrak three times a week. The Sunset Limited also operates from New Orleans to Los Angeles via Houston.

The city of Houston is on the continental and intercontinental air transport network of the United States and currently has three airports:

Houston is connected to the Gulf of Mexico via the Houston Ship Channel and is thus connected to the most important sea routes in the world. The port facilities are used for the transshipment of goods of all kinds, although the main focus is on the transshipment of crude oil and the products refined from it. In a national comparison, the port of Houston is the most heavily handled in the country.

Houston is home to the Lyndon B. Johnson Space Center (JSC) and the Mission Control Center (MCC) (radio nickname: "Houston") and, as a NASA facility, has coordinated the US manned space program since 1961.

Houston has 16 twin cities (in brackets, the year the collaboration began):

The city is the seat of many universities, such as the private Rice University , the state-owned University of Houston or the Texas Southern University, which was originally founded only for blacks .

In the carefully restored Downtown Houston there are numerous important cultural institutions in the immediate vicinity: the Schauspielhaus Alley Theater , the Wortham Center (home of the Houston Grand Opera ), Jones Hall (concert hall of the Houston Symphony Orchestra ) and the Hobby Center for the Performing Arts (cultural center for guest performances including shows, musicals and concerts). 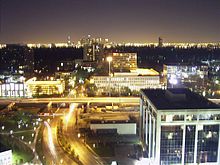 → Main article : List of personalities from the city of Houston