This article describes the city in Western Australia. For the city in Scotland, see Perth (Scotland) , for further meanings see Perth (disambiguation) .

Perth [ pɜːθ ] is the capital and by far the largest city of the Australian state of Western Australia .

Perth was founded on August 12, 1829 on the Swan River near its mouth in the Indian Ocean by Captain James Stirling , with the aim of preventing the French from colonizing the Australian west. Perth was officially founded in 1856. The city was named after the Scottish city of Perth , where he was born , at the request of the British War and Colonial Minister Sir George Murray .

Further Dutch visits followed. On April 28, 1656, the Vergulde Draeck ran on her way to Batavia on a coral reef 107 kilometers north of the Swan River near what is now Ledge Point. French visits began in 1801.

The nearest major city, Adelaide , is 2136 km away, and the second closest, Denpasar on the Indonesian island of Bali , 2580 km. Today around 2.1 million people live in the greater Perth area (as of June 2018). 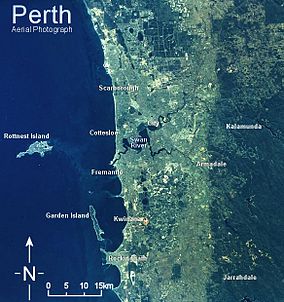 Perth in the true sense of the word refers to the greater Perth area, the Perth Metropolitan Area. Today it consists of 30 independent municipalities with their own administrations ( Local Government Areas ). The actual City of Perth is comparatively small. It houses, among other things, the financial district and the stock exchange, the Northbridge entertainment district, a shopping mile as a pedestrian zone (Hay Street / Murray Street) and the seat of the state parliament. It only has a good 12,000 inhabitants. The chairman of the Perth City Council is also the Lord Mayor and the chief representative of the whole city. In 2007, Lisa Scaffidi was the first woman to be elected to this position.

The downtown skyline of Perth Water as seen from Kings Park in 2012.

The area of ​​the fourth largest Australian metropolis has meanwhile exceeded the size of 5400 km² and extends from the beaches on the Indian Ocean eastwards to the foothills of the Darling Range . The center is about ten kilometers as the crow flies from the Indian Ocean inland. The city is where the Swan River extends to the uppermost river lake Perth Water. The estuary was converted into a port by hydraulic engineer CY O'Connor as early as 1886 , but it belongs to the independent town of Fremantle . The Swan River is not used by larger ships.

The “soul of the city” is what many citizens of Perth refer to as Kings Park , a 400 hectare area on the outskirts of the city, which largely consists of original Australian bushland. The botanical garden occupies the southern part of the park . There is a restaurant, sports facilities, monuments, an open-air cinema and space for picnics and walks. From the height of the park you also have a view of the Swan River, which at this point widens into a lake, and of the glass and concrete structures on its banks. They are a result of the West Australian natural resource boom. Some old buildings were removed for the modern ones. Perth, founded by British settlers as early as 1829, also has old buildings such as the Government House (1864), the Deanery (1859), the Town Hall (1867) or His Majesty's Theater (1904). The oldest park is Stirling Gardens (1845), the oldest building is the Old Courthouse (1836). The largest building in Perth is the Central Park skyscraper with 226 meters and 51 floors, followed by the Bank West building with 214 meters and 52 floors.

Perth is known as a metropolis for sailing and water sports. The water temperature of the Indian Ocean is relatively low due to an ocean current coming from the Antarctic and is consistently 20 to 22 ° C. A popular destination - also for divers - is the offshore island of Rottnest Island ("Rotto" for short in the local dialect).

Perth is the seat of Catholic and Anglican archbishopric and, among other things, an important financial center. In addition, the Perth Mint is one of two mints on the continent of Australia, and where the largest gold coin in the world, the Australian Kangaroo One Tonne Gold Coin , was minted and is on display. Perth is the western terminus of the Trans- Australian Railway , the Indian Pacific Railway , which runs through the Nullarbor Desert to Sydney .

In downtown Perth you can find buildings from the turn of the century, such as B. the town hall and the Wesley Church (both from 1890), the mint ( Perth Mint from 1899), the Savoy Hotel (1910) and the post office (1923) between up to 249 m high buildings. All over Perth, various European branches from the time of early European settlement are preserved and accessible as open-air museums, such as B. Tranby House in Maylands, Woodloes Homestead in Cannington, Azelia Ley Homestead in Cockburn, Ellis House and Halliday House in Bayswater, and Minnawarra Historic Precinct in Armadale.

The main museums of Perth are gathered in the Perth Cultural Center, which consists of the two art galleries Art Gallery of Western Australia and Perth Institute of Contemporary Arts (PICA), the Western Australian Museum (history and natural history), the Alexander Library and the State Records Office.

The Western Australian Maritime Museum has been in Fremantle since 2002 , which is dedicated to the subject of the sea from various angles. The America's Cup regatta yacht Australia II is exhibited there.

Of the more than 1650 registered shipwrecks off the coast of Western Australia, around 130 are around Perth. Some of them can be visited by diving and snorkeling.

The Perth Concert Hall is the premier venue for classical concerts, ballet, and theater performances. In 2004 the 16,500 m² Perth Convention and Exhibition Center was opened.

The University of Western Australia has hosted the Perth International Arts Festival every year since 1953, which it claims to be the oldest in Australia. The festival includes theater, dance, music, film, visual arts and literature.

The Sculpture by the Sea Cottesloe has been held regularly since 2014.

The city has a zoo (on the southern side of the Swan River) and the Aquarium of Western Australia in the adjacent Hillarys Boat Harbor to the north.

Kings Park and Botanic Garden is directly adjacent to the city center . The botanical garden displays around 2000 different plants from the region on an area of ​​18 hectares and is home to local bird species. Most of the approximately four square kilometers large park consists of natural bushes. Further west, less than a kilometer from the Indian Ocean, is the 437 hectare Bold Park around Reabold Hill, which also consists mainly of natural bushes and overlooks the ocean and the city.

Elizabeth Quay, which has been completely redesigned in recent years, is also of great tourist interest. Modern architecture and various sculptures are intended to make the area attractive to visitors.

The large number of street art in Perth and the neighboring communities should also be emphasized . Street art has been consciously promoted for several years in order to further increase the attractiveness of the city for visitors.

Rottnest Island is an island off Perth's coast, which is often used for day trips. The island is home to some rare animal species, such as the quokka or the cliff parakeet . Another island off Perth is Penguin Island . Not far from Penguin Island is Lake Richmond, where a critically endangered colony of thrombolites has lived for an estimated six million years. 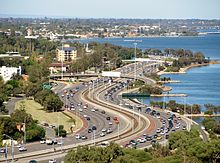 The city of Perth is also the main transport hub in Western Australia because of its location and size. It has an international airport, an airport for general aviation, two military airports, inner-city and regional bus and train lines , ferry connections and various expressways .

Use of local public transport is free in the city center. A larger container and passenger port is located in neighboring Fremantle . 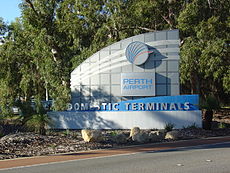 The Perth Airport is also served both internationally and nationally and is due to its location a strategically important for aviation airport. It has one international and three national terminals and an area for general aviation . It is the fourth largest airport in Australia in terms of passenger volume.

The airport is connected to the city center by a direct bus line. A new underground station (Airport Central Station) is under construction (as of December 2018) and should enable trips to the city center of Perth within 18 minutes from 2020.

The climate in Perth is mild, with the sun shining between ten and fourteen hours almost every day. The Aborigines call this place Alunga , which loosely translated means "place with a lot of sun". Perth has dry and hot summers that are regularly cooled in the afternoons near the coast by the stiff breeze from the Fremantle Doctor . In summer it can get up to 46 ° C on extremely hot days. The winters are usually very mild at 17 ° C, but can also get cold to around 1 ° C.

On the Swan River

The Parliament of Western Australia

Perth by night - from Kings Park

Sister cities of Perth are:

There are friendly relationships with:

The football club Perth Glory plays in the A-League , the highest Australian division. In the Australian Football League , the city is represented by the West Coast Eagles and the Fremantle Dockers . The Perth Scorchers are a cricket team that plays in the Big Bash League , the highest Australian league in T20 cricket . After losing the final twice in a row in 2012 and 2013, the first time against the Sydney Sixers and the second time against the Brisbane Heat , they won the 2014 final in their own stadium against the Hobart Hurricanes . The Perth Wildcats play in the National Basketball League . The Hopman Cup in tennis takes place annually in the Perth Arena .

→ Main article : List of sons and daughters of the city of Perth