The title of this article is ambiguous. Additional meanings are listed under Adelaide (disambiguation) .

Adelaide [ ˈædəleɪd ] is the capital of the state of South Australia in Australia . Adelaide is a coastal city on the Saint Vincent Gulf and was named by the first governor of the state, Captain John Hindmarsh (1785-1860), in 1837 after the British Queen Adelaide ( Adelheid von Sachsen-Meiningen ). In contrast to cities like Sydney or Hobart, Adelaide did not emerge from a convict colony.

The city is nicknamed "festival city" because of its cultural events, such as the Glenelg Jazz Festival or the Adelaide Festival of Arts. Adelaide is also called the “city of churches”. Adelaide has hosted several sporting events, including As of 1985 bis 1995 the Australian Grand Prix of Formula 1 at the Adelaide Street Circuit .

The city ​​of Adelaide actually only consists of the city ​​center within the park ring, divided into Adelaide and North Adelaide. It has 22,000 inhabitants. However, the directly surrounding 250 places are added to the urban area.

In a ranking of cities according to their quality of life, Adelaide was ranked 29th out of 231 cities worldwide in 2018.

Adelaide is north of the Fleurieu Peninsula , between the Gulf Saint Vincent and the Mount Lofty Mountains . The city extends 20 km from the coast to the foothills of the mountains. According to the Australian Bureau of Statistics , the metropolitan area of ​​Adelaide has a total area of ​​870 km² and an average height of 50  m . At 727 meters, Mount Lofty is the highest point in the metropolitan area.

Before the settlement of this area, Adelaide was mostly covered by bushland. The coastal areas were predominantly swamps and bogs. Several rivers and streams flow through the metropolitan region. The largest catchment areas are the River Torrens and Onkaparinga River . The city's basic water supply is provided by the Happy Valley Reservoir with a share of 40% and the larger Mount Bold Reservoir with 10% .

The metropolitan area of ​​Adelaide is divided into 19 Local Government Areas (LGAs):

Adelaide has a Mediterranean climate with hot, dry summers and cool winters. The average temperature between December and February is around 28 ° C, but can climb to over 40 ° C. In winter, mainly in July and August, they usually range between 5 ° C and 15 ° C. The climate is arid from November to mid -April and humid from mid-April to October . A common name of the city is "The dryest city in the dryest state of the dryest country of the dryest continent of the world" (German: The driest city in the driest state of the driest country of the driest continent in the world).

Before the settlement by Europeans, around 300 Aborigines of the Kaurna tribe lived in what is now Adelaide . Those who survived the introduced diseases were later resettled in the Port Lincoln area , well outside of their ancestral territory.

In 1627 the Dutchman Pieter Nuyts mapped the coast of South Australia, and in 1802 these coasts were explored, but then by the British. William Light , Surveyor-General of South Australia, planned the city and designated a site about ten kilometers inland on the River Torrens for the construction of the capital of the new colony. The wide, checkerboard-patterned streets and the spacious parks are also thanks to him. Governor John Hindmarsh named the city, founded in 1836, on instructions from the British royal family after Queen Adelaide , the German Princess Adelheid von Sachsen-Meiningen (1792–1849) and wife of the British King Wilhelm IV , who came from Meiningen . 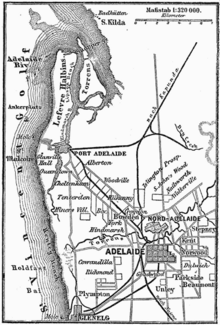 In November 1838 the colony promised the settlers freedom of religion . The majority of the early settlers were Protestant British such as Baptists , Presbyterians and Methodists , who had suffered reprisals in their homeland due to the nonconformity of their beliefs with that of the Anglican Church . In 1839 the first Old Lutherans came to Adelaide from Prussia , who had experienced repression in their homeland and were given by King Friedrich Wilhelm III. had been persecuted for resisting the forced union with the Reformed (Calvinists).

Also in 1839, the Adelaide Chamber of Commerce was established and land outside the city center was made available for growing food.

Significant silver and copper finds in the early 1840s, and later lead finds, caused the first economic boom. Australia quickly became one of the British Empire's largest metal exporters . Around 30 “suburbs” such as Unley and Norwood developed quickly outside the Adelaide ring road. As early as 1851, the number of European settlers was around 14,600.

In 1856, Port Adelaide was connected to Adelaide by a steam-powered railway. A large water supply was installed in 1861 and the gas supply in 1863. In 1872 Adelaide was the first Australian city to be connected to London by telegraph . In 1878 the expansion of the tram began, then pulled by horses to connect several parts of the city. In 1901 a power plant was built to supply the residents.

Another economic boom between 1870 and 1890, this time due to wheat, triggered another construction boom. Many of the buildings that were built during this period shape the face of the city today.

In the 20th century, much of the immigrants were still mainly British. After the end of the Second World War , many Italians and Greeks joined them. In the 1970s, many Vietnamese and Latin Americans immigrated . In addition to immigrants from many other countries around the world, they shaped the image of the city and the way of life.

Adelaide's image as a city of culture has its origins in the 1970s. Prime Minister Don Dunstan promoted the Adelaide Festival of Arts, as well as legislation in South Australia.

The area enclosed by the park ring is now mainly a business district.

Aerial view of the city center and the Parkring 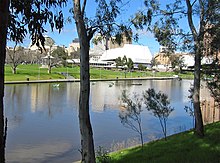 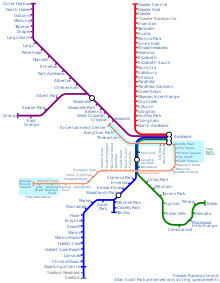 Network of 6 railway lines and one tram line

The Adelaide airport is West Beach and is about eight kilometers from the city center. Adelaide Airport is Australia's fifth busiest airport, with both domestic and international flights arriving.

A train station just outside the city center (Keswick Terminal) has direct connections to Melbourne , Perth , Sydney , Darwin and Alice Springs . These connections are mainly used for freight traffic, but special trains for passenger traffic such as " The Ghan ", "The Indian-Pacific" and The Overland operate .

All modes of public transport are organized by the state company Adelaide Metro (funded by the government of South Australia) :

An offer of the "Adelaide City Council", so the city administration, are freely available bicycles (including mandatory helmet) at some places, z. B. hostels or bike shops. A form must be filled out and an ID card, e.g. B. be left a driver's license.

In 2014, the city of Adelaide hosted the international Velo-city bicycle traffic congress.

There are no longer any ferries that operate regularly from the Adelaide metropolitan area. There are regular ferry services to Kangaroo Island from Cape Jervis or Wirrina (about 100 km south of Adelaide).

Much of the Australian defense industry is located in the greater Adelaide area. The Australian subsidiary of BAE Systems (second largest defense company in the world), BAE Systems Australia, and the Australian subsidiary of Lockheed Martin have their main locations in Edinburgh Parks northwest of Adelaide. The Technology Park Adelaide (the first of its kind in Australia) in Salisbury City (north of Adelaide) houses the defense and aerospace divisions of Saab and Raytheon , as well as other global high-tech companies such as Topcon , Optus and Xtralis . The state-owned Australian Submarine Corporation has its headquarters in the suburb of Osborne .

One of the world's largest media conglomerates, the News Corporation , was founded in 1979 by Rupert Murdoch in Adelaide and had its global headquarters there until 2004.

General Motors ' Australian car brand , Holden , had one of its two plants in the Elizabeth suburb until 2017.

The Adelaide Casino is located in the former train station building in the north of the city center . With over 1000 employees, the casino is the tenth largest employer in the city.

Sister cities of Adelaide are:

We have also had friendly relations with three Chinese cities since 2001 :

On November 30, 1948, a mysterious, never-before-seen man ( Somerton Man ) appeared on Somerton Beach . He died of an unknown poison on the morning of December 1, 1948. Neither the origin nor the identity of the man could ever be clarified. To date, the investigation into the case has not been completed.

There are free W-LAN hotspots with the SSID "Internode" in the city. They are often located near or in public buildings, e.g. B. Libraries.