from Wikipedia, the free encyclopedia
This is the spotted version , flagged on July 9, 2020 . There are 2 pending changes that have yet to be viewed.

Sichuan ( Chinese  四川 , Pinyin Sìchuān ? / I , W.-G. Ssŭ-chʻuan  - "four rivers"; obsolete after Brecht Sezuan , Duden Szechuan , rarely Szetschuan , Lessing Othmer Sitschuan , Post Szechwan , Rod Ssetschuan , Yale Szchwan ) is a province of the People's Republic of China in the southwest of the country with Chengdu as its capital. Sichuan is also poetically known in China as the "land of plenty " ( 天府之國  /  天府之国 , Tiānfŭ zhī Guó ). The spelling " Sechuan " has no norm and is probably a misspelling of " Szechuan " according to Duden.

Sichuan is east of the Tibetan plateau on the upper reaches of the Yangtze River .

The core of the province is the Red Basin , a fertile plain surrounded by mountains. The level has a north-south gradient of 700 m to 300 m. The west is dominated by high mountain ranges such as the Daxue Shan , which with the Gongga Shan (7556  m ) - Tibetan Minya Konka , Chinese  貢嘎 山  /  贡嘎 山 , Pinyin Gònggā Shān - has the highest elevation in the province. To the north, the basin is closed off by the Qinling Mountains , which go up to the 4000ers. To the south and southeast lies the Dalou Mountains with peaks around 2000 m.

The Yangtze River is the largest and richest river that crosses Sichuan. Its course forms most of the western and southern borders of the province, with the name Jinsha Jiang until Yibin . In Sichuan it receives four tributaries that give the province its name. These four rivers are the Min Jiang , Tuo Jiang , Jialing Jiang, and Wu Jiang . Before that he had already recorded the Yalong Jiang - 雅礱江  /  雅砻江 - at Panzhihua .

The Sichuan Basin , also known as the "Red Basin", has a subtropical climate despite its continental location . The sheltered location in the valley gives the plain 350 frost-free days a year and thus the possibility of farming all year round. An important border is marked by the Qinling Mountains to the north. In January the average temperature north of it is 0 ° C, in Sichuan to the south it is 8 ° C. The average summer temperatures are around 30 ° C. The amount of precipitation is 1000 mm and due to heavy cloud and fog formation, Sichuan only has 25-30 sunny days per year.

The climate in the mountainous regions that surround the Red Basin and rise to the west to the Tibetan high plateau, on the other hand, is significantly colder and drier.

The diverse geomorphology and the different climates have created favorable conditions for a rich flora. The province has 7.46 million hectares of forest.

One fifth of the so-called “ living fossils ” in China, such as the primeval sequoia and the pigeon tree, are endemic to Sichuan . The panda , one of the national symbols of China, is native to four mountains in Sichuan and is particularly cherished in protected areas. The most important nature reserve is the Wolong - Reserve .

History of the administrative structure

The western part of Sichuan, with over a third of the area of ​​the province, belonged to the Xikang province until 1955 , which theoretically largely corresponded to the Tibetan cultural region of Kham . West Kham or Qamdo came under Chinese administration during the Empire. The province of Xikang was dissolved in 1955, West Kham went to Tibet, East Kham to Sichuan, which restored historical conditions.

The city of Chongqing and the associated administrative district was spun off from Sichuan Province on March 14, 1997 as a city under the government .

The following parts of this article appear since 2016 is out of date to be : Subject Outline from the district level down, specifically including Infobox
Please help with to the missing information research and insert .

Today, Sichuan is made up of 18 prefecture-level cities and three autonomous districts:

The population figures are based on the 2010 census and refer to the actual urban settlement.

Settlements have existed in Sichuan since the Shang dynasty . The kingdoms of Shu and Ba developed until they were in 316 BC. Were annexed by the emerging Qin Empire. An archaeological site for the Shu Empire is in the village of Sanxingdui .

In the 3rd century BC With the establishment of the Dujiangyan irrigation system, an important foundation for the province's agricultural wealth was laid.

When the rule of a Chinese dynasty collapsed, the people of Sichuan were always among the first to use the turmoil to found their own kingdom. This was the case in year 24, when Gongsun Shu was proclaimed King of Shu during the Red Eyebrow Rising . His rule lasted until 36 when it was crushed by Han Guangwudi .

When the Yellow Turban Rebellion heralded the end of the Han Dynasty , Zhang Lu established a Daoist theocracy in Sichuan and southern Shaanxi from 186 to 216, based on the teachings of his grandfather Zhang Daoling .

During the collapse of the Han Empire, Liu Bei founded Shu-Han in 221 , one of the three kingdoms that gave its name to the following period.

By the early 1930s, the northern parts of Sichuan were already under communist control. In 1935 the Long March route passed through Sichuan; The storming of the Luding bridge was one of the most daring actions.

In 1936, Sichuan experienced an extreme drought with subsequent famine.

After the Japanese conquered Wuhan , the nationalists under Chiang Kai-shek moved their headquarters to Chongqing in 1938.

In 1949, after the proclamation of the PR China, the Southwest Office was set up under the leadership of a native of Sichuan, Deng Xiaoping , to consolidate the CCP's rule in the region. In December 1949, the Communists captured Chongqing, the KMT's last mainland base.

In 1955 the province of Xikang was dissolved and its eastern half was added to Sichuan.

In 1997, the area around the city of Chongqing in the east was separated from Sichuan and placed under the Chinese central government as a city directly under the government.

In addition to a majority of Han (95%), members of the minorities of the Yi (2.6%), Tibetans (1.5%), Qiang (0.4%) and Miao live in Sichuan . Most of the population lives in the plains and is dominated by the Han, while the mountainous areas are sparsely populated and strongly influenced by the minorities.

Sichuan is an important starting region for internal migration , i. H. many migrant workers come from this province.

Population growth of the province since 1954. In 1997, Chongqing was split off from the province.

The autonomous districts of Garzê and Ngawa in the west and north of Sichuan are predominantly inhabited by Tibetans who speak the Tibetan dialects Kham and Amdo . The Qiang and related ethnic groups speak several of their own Tibetan-Burmese languages . The Yi , who are based in the Liangshan Autonomous District in southern Sichuan, also use their own Tibetan-Burmese language, which is officially written with a syllabary of 1164 characters.

The city of Kangding in Sichuan, 2004 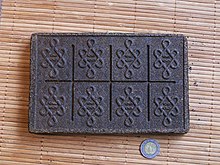 The province of Sichuan is still predominantly characterized by agriculture. The government is striving to pursue an active economic policy and has set up special economic zones in Chengdu and Mianyang .

Sichuan is one of the wealthy inland provinces, but it cannot compete with coastal regions like Guangdong or Shanghai.

Sichuan is primarily a rice-growing area, but is also an important producer of corn , sweet potatoes , wheat , rapeseed and soy . The cultivation of fruits and citrus fruits is also common. In terms of animal products, pork and silk cocoons are particularly important. In addition, tea of international standing is produced in Sichuan . This tea is intended for export only . The large- framed Jiulong yak is also bred in the mountainous regions of the province . A breeding station, which aims to further improve the performance level of this yak breed, has existed in Jiulong since 1980 .

Iron (near Panzhihua), titanium , vanadium and cobalt are mined in Sichuan .

In 1999, Sichuan's industrial production was worth 390 billion RMB. In addition to heavy industry (iron, steel , power generation), there is light industry with wood processing, silk weaving and food production.

Sichuan was integrated into the PRC rail network in the 1950s, and Chengdu has been the main hub in China's western region ever since. The connections with the other parts of the country run north via Baoji to Xi'an, east via Chongqing and south via Xichang to Kunming. In 1998 the total length of the routes was 2693 km.

Several well-developed roads lead to Tibet in the west, e.g. B. via Kangding, and since August 2006 the new Qinghai-Tibet Railway , which is also the highest railway line in the world. The motorway network is still being expanded. In 1998 it was 550 km long between Chongqing, Chengdu, Mianyang and Xinjin.

The dissident writer Liao Yiwu was born in Sichuan. As Sezuan , it is the setting for Bertolt Brecht's 1938 to 1940 play The Good Man of Sezuan , but the reference is symbolic and not concrete.

In Don Winslow's novel "China Girl" the main character Neal Carey ends up in Sichuan. Other locations are the Emei Shan and the Leshan Big Buddha. 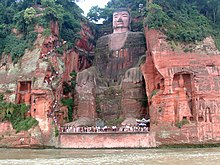 The following are listed from Sichuan in the UNESCO list of world cultural heritage and world natural heritage: