The Jangtsekiang , or Jangtse for short ( Chinese  長江  /  长江 , Pinyin Cháng Jiāng ? / I  - "Long Stream, Long River", short: 江 , Jiāng ), is the longest river in China . At 6380 kilometers, of which 2800 kilometers are navigable , it is also the longest river in Asia and the third longest river in the world after the Nile and the Amazon . Its headwaters are in the highlands of Tibet in Qinghai . At its mouth in the East China Sea , it carries an annual average of 31,900 m³ of water per second.

The Yangtze River plays a major role in the way the Chinese see themselves. It divides the country into north and south China and was the site of numerous important events in Chinese history. These include, for example, his crossing by the People's Liberation Army during the Chinese Civil War on April 21, 1949 and the right of western powers to navigate the river with gunboats until the middle of the 20th century .

Map of the headwaters

The Yangtze River rises in Tanggula Shan , within a headwaters of several hundred square kilometers in the west of Qinghai Province .

At Shiluoke the river changes direction again and flows south to the village of Chitian. After a 90 ° curve to the east, the river reaches the town of Rubeidi after about 55 km, from where it turns again in a north-easterly direction. At Gelipingzhen the direction of the river changes to the east, which the Yangtze River maintains until shortly before the confluence of the Xiao Jiang , which comes from the south, at Yenjuping. From there the river flows mainly in a northeasterly direction.

At Xinshizhen there is a 180 ° loop with a subsequent change of direction to east-southeast to the city of Yibin . There the Min Jiang flows into the Yangtze River coming from the northwest (up to this point: 金沙江, Jīnshājiāng 'golden sand river'), which flows from there further northeast to Chongqing .

Mouth of the Yangtze River north of Shanghai

The Yangtze is navigable from the city of Yibin ( 305  m above sea level) to the confluence with the Pacific for 2,800 kilometers. About 400 kilometers downstream is Chongqing , later Wanxian . Below the Three Gorges Dam, Yichang, Wuhan-Hankou, Jiujiang, Wuhu and Nanjing are important inland ports .

The construction of the ship lift next to the large five-step lock was repeatedly postponed due to financial and technical problems. In 2016 the 113 meter high ship lift went into operation, which can transport ships of up to 3,000 tons (Tonnen class V ). Since the height difference can be overcome in about 40 minutes, the elevator is preferably used by passenger shipping. The passage through the five-step lock takes three to four hours, which should not be expected of tourists. Ships up to 10,000 tons (∼ Large KüMo ) can enter the locks and thus reach the port of Chongqing .

At the mouth of the river lies an older part of the port of Shanghai .

In 2011, the freight transport through the locks reached 100 million t, before the dam construction it was only 18 million t. In 2015 the volume increased to 120 million t. 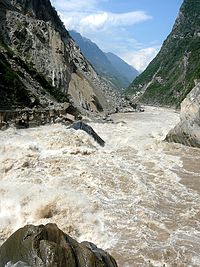 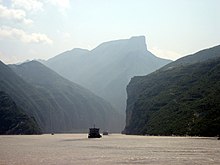 Kuimen - the gateway to the Qutang Gorge

The Yangtze River has many gorges along its upper and middle reaches to Yichang .

The best known are the three gorges Qutang, Wuxia and Xiling between Chongqing and Yichang, which have since been flooded by the controversial construction of another large power plant , the Three Gorges Dam , so that a 600 km long reservoir was created, the water level of which rises when it is filled 175 m above the valley floor.

Due to the enormous deforestation of the mountain slopes on the central reaches of the Yangtze in eastern Tibet, landslides (mudslides) result in huge sediment inputs into the river (approx. 2 billion m³ / year), so that it also becomes a "yellow river" (name of the Huang He in North China) was. As a result, there is a considerable risk of silting up the Three Gorges Reservoir. Logging has been banned on the mountain slopes of Tibet since 1998, and forests are being reforested.

Below the large dams, the river flows more slowly and broadly through the plains of central China. The first large of the natural retention basins that play an important role in protecting against flooding is Dongting Lake . Like the largest lake in China, the Poyang Lake , its extent changes depending on the water flow, which varies over the course of the year . There is a connection to the Yellow River via the Emperor's Canal , which crosses the Yangtze River near Yangzhou . At Shanghai it flows into a delta in the East China Sea .

In addition to the construction of the Three Gorges Dam, there is a second major project, the South-North Water Transfer Project , a water diversion system that will supply water from the Yangtze to water from the Yangtze River in northern China , which is suffering from water shortages . The first route along the Kaiserkanal is already in use, but is still to be expanded; two more routes in the upper reaches of the Yangtze are at the planning stage.

The Gezhouba Dam is located directly below the Three Gorges Dam .

At the Three Gorges Dam, the water falls through the openings in the wall into the 113 meters deeper river. 26 turbines and generators generate electricity.

According to Chinese data, the power plant has an average electrical output of 9500 MW.

Important cities on the Yangtze River are Chongqing , Shashi , Wuhan , Nanjing and Shanghai . Because of its width, the river is spanned by some very impressive bridges, including the Runyang Bridge and the First Yangtze Bridge in Wuhan .

The Yangtze River is known for its flood disasters that have killed three million people over the past 100 years, for example the 1931 flood disaster . Threatening floods became more and more frequent, six times in the last 15 years alone. The dam should now absorb the excess water.

Critics complain, however, that nothing is done about the causes of the “natural” catastrophe. The Yangtze has always flooded its banks regularly. As a result, the arable land was regularly covered with fertile river mud and the area became an attractive cultivation area.

However, the severe flooding has accumulated in an unnatural way in recent years. One of the reasons for this is the deforestation of forests, which had previously absorbed large amounts of rainwater. On the other hand, more and more lakes were drained in this area in order to create land for the steadily growing population. In the event of flooding, the river can no longer escape into natural flood areas and floods cities and villages.

Tributaries of the Yangtze River will probably continue to be affected by flood disasters in the future, as the dam cannot help there.

A thousand miles along the Yangtze River (Wang Hui, around 1700)

At the end of 2007, a Sino-Swiss research team in Bern presented the results of an investigation. The report of the “Yangtze Freshwater Dolphin Expedition” under the direction of the Institute for Hydrobiology / Chinese Academy of Sciences in Wuhan and the Baiji.org Foundation was astonishing: Despite the introduction of large quantities of pollutants, the quality of the water is better than previously assumed. The chemists attributed this to the effect of the dilution: the Yangtze River with its countless tributary rivers carries huge amounts of water with it, which dilutes the concentration of pollutants, the researchers wrote in their report.

In 2012, however, Chinese researchers complained in the journal Science that the river was “increasing contamination” and “unprecedented pollution”.

Numerous endemic species are suffering from industrialization, the Chinese river dolphin is believed to have become extinct, and the Yangtze sturgeon and the Chinese alligator are considered critically endangered.

Of all the rivers in the world, the Yangtze washes the most plastic into the sea .