The confluence of a river into another body of water is called the mouth . If a river flows into another river, one speaks of a confluence , especially when two rivers with roughly the same water flow join and the river below this confluence bears a new name. 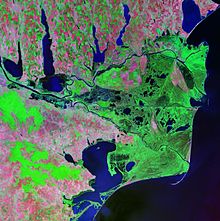 False color - Satellite image of the Danube Delta in 2000

From a certain size or water flow, a river can form a delta (also called estuary delta or delta estuary ), where it flows into the sea or a still water . A characteristic of a delta is the division of the river into several mouth arms ; In the aerial or map image, the mouth region then roughly shows the shape of an isosceles triangle , i.e. the Greek capital letter Delta (Δ). It arises because the river deposits sediment load at the mouth, which is not carried away by the receiving water, as a result of which it shifts its own path and bypasses this obstacle by dividing it up.

A typical example of a delta estuary is the Nile Delta in Egypt . The Rhine is at its confluence with the Bodensee a so-called inland delta (see below for other possible meanings of that term). 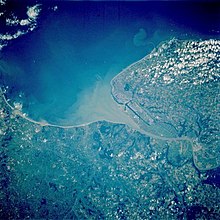 The mouth of the Seine funnel (center) into the southern North Sea, taken from space.

In addition to a delta, a river can also flow seamlessly into the sea or a lake, or it can form an estuary (from the Latin aestuarium “estuary exposed to the flood” or “bay”), an estuary. Rivers in particular flow through estuaries on coasts with strong fluctuations in sea level between ebb and flow, which then transport away the deposited sediments. Because this so-called tidal range is relatively high on the southern North Sea coasts , typical estuaries have formed in Germany on the lower Elbe , Ems and Weser as well as on the lower Thames in Great Britain. In addition, transitional forms between delta and funnel mouths are possible, in which several mouth arms of a delta widen to form an estuary, such as the mouth of the Rhine or the Ganges delta .

In contrast, mouths of rivers into other rivers regularly have no delta due to the high transport capacity of the receiving water. Often these mouths have no transition or are characterized by a short funnel, which is never called an estuary at such internal mouths.

Estuaries often form ecological boundaries between biological species , in the case of estuaries in still waters, for example, between species that are well adapted to flowing water on the one hand and calm on the other. This limit is sharper the faster the flowing water flows. On the coast of the sea, the flow velocity of the flowing river is usually very low. That is why the change in the salt content of the water (salinity) is the more important ecological barrier, the higher the higher the concentration, the higher it is. The water in the immediate estuary is usually brackish , and such brackish water areas also have a species composition that is characteristic of them. In Central Europe, they are also called ruddy flounder regions because of their fish fauna .

At river-river mouths, the salinity usually does not change at all and the flow speed often only slightly. There the sediment flow can be an ecological barrier, because species that prefer clear water rarely migrate into cloudy rivers.