Under brackish water refers to sea water or sea water with a salt content ( salinity ) of 0.1% to 1%.

The word brackish water is derived from the Low German word brackish . This describes a body of water that was created by a dike breach and subsequent scouring . 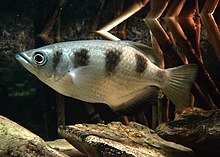 In the area of river mouths in the sea, the mixing of the sweet river water with the salty sea water creates the so-called brackish water zone . This intertidal zone is characterized by a permanently changing salt content and therefore places high demands on the regulation of their water and salt balance ( osmoregulation ) on the organisms living there due to the changing osmotic pressure . Here - depending on the salinity - freshwater-tolerant species from the sea and saltwater-tolerant species from freshwater meet. Some animal and plant species have developed the ability to survive in the brackish water conditions, such as

The brackish water zones are generally populated by only a few highly specialized species, but with a high population density. In this ecosystem there is a high density of individuals with a relative poverty of species (low biodiversity ).

In the area of gulfs or bays , the brackish water zones often have a more stable salinity, for example the Gulf of Finland or the northern part of Lake Maracaibo .

In the tropics , too, brackish water zones form in the area of ​​influence of estuaries ; they are often characterized by extensive mangrove swamps .