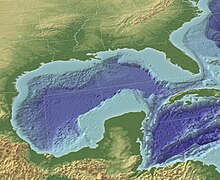 The Gulf of Mexico

A gulf is a larger bay . The term gulf is synonymous and is used less often.

The word "golf" was borrowed from Italian ( golfo ) into German and was used here for the first time around the middle of the 14th century. documented in reports by German Jerusalem drivers. About late Latin colpus or colfus it ultimately goes back to the ancient Greek word κόλπος kólpos (post-classical mostly κόλφος kólphos ), which was and is also used in Greek in the sense of "bay", but originally as much as " bosom " or " lap " means. The metaphorically corresponding German term “Meerbusen” is a more recent loan translation from the Latin sinus maritimus , first recorded in 1605 in the dictionary of Levinus Hulsius .

If “the Gulf” is used without a more detailed definition, today it is mostly used to refer to the Persian Gulf . B. also in word compositions such as " Gulf region " or " Gulf States ", in older texts from the time before the Gulf Wars (i.e. before 1980), however, mostly the Gulf of Mexico , the starting point of the Gulf Stream .