This article covers the Greek island and municipality of Kos. For further meanings, see the definition of KOS .
f9 f10 f8

The Greek island of Kos ( Greek Κως [ kɔs ] ( f. Sg. ), Turkish İstanköy , Italian Coo ) in the eastern Aegean is off the coast of Asia Minor . Kos is the third largest Dodecanese island after Rhodes and Karpathos . In 2011 the island had 33,388 inhabitants. The main town is the city ​​of the same name, Kos with over 19,000 inhabitants , which forms the tourist and cultural center of the island. Since 2011, the island has also formed a municipality in the South Aegean region and, together with Nisyros, the Kos regional district .

Kos is located in the East Aegean Sea at the entrance to the Gulf of Gökova ( Turkish Gökova Körfezi). North of the city of Kos, the shortest distance to the Bodrum Peninsula (Bodrum Yarımadası) west of the Turkish city ​​of Bodrum is less than five kilometers. The Datça Peninsula is 15 km south. Neighboring islands are Pserimos , four kilometers, and Kalymnos , twelve kilometers to the north . Nisyros is 12 km south and Astypalea about 43 km west.

With an area of ​​287.611 km², the length is a little more than 42 km and the maximum width almost ten kilometers. The coastline is relatively straight with no notable indentations. In the east, near the south coast, the narrow, up to 846 m high mountain range of the Dikeos massif (Δακαιος) forms the highest point on the island. This mountain range flattens out towards the north and turns into a fertile, agriculturally used plain. To the west of a 1.6 km narrow isthmus lies the Kefalos Peninsula (Κέφαλος χερσόνησος) with the 426 m high mountain Latra (Λάτρα) in the extreme south.

The following important information is missing from this article or section:
The story before the "Doric" colonization of the island is missing, e.g. B. Strong Western Anatolian influences in the Early and Middle Bronze Age, strong Minoan and then Mycenaean coinage in the Late Bronze Age, etc. (presumably there is also something relevant from earlier times?)
Help Wikipedia by researching and pasting it .

The island was colonized by Doric settlers from Epidaurus , who may have brought with them the cult of the healing god Asclepius . Since 546 BC Under Persian control, Kos belonged from approx. 450 BC. To the Attic League and fell to Sparta in 405. In the Hellenistic period, Kos was the seat of a medical school (see also empiricist (medical school) ); Contrary to older assumptions, however, this was not led by Hippocrates of Kos (approx. 460-370 BC), the most famous doctor of antiquity, because at that time there were no medical schools in the strict sense, but doctors were trained exclusively in the apprenticeship system . 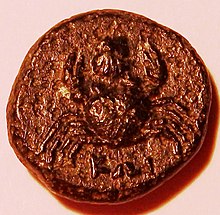 This school gained similar prominence through the Asklepiadenid , which doctors are said to have sworn when they started their profession, but this is an unsupported assumption . From the middle of the 4th century until the conquest by Alexander the Great , Kos was under the rule of the Carian Hecatomnids in Halicarnassus , today's Bodrum. 366 BC At the northeastern tip of the island, the new capital Kos, replacing the old Astypalaia (today Kefalos ), was founded and a little later the sanctuary of Asklepios was built on the site of an Apollon grove, which was visited by many foreign guests and patients. Around 300 BC The Babylonian priest and historian Berossos founded the first astrology school in the Hellenic world on Kos , which achieved great prestige. Kos minted its own coins in Greek times, on which Asclepius, the snake and the crab are often depicted.

Kos represented a kind of natural trade connection between the trading power Rhodes and the empire of the Ptolemies and came under the influence of both powers. It was largely self-sufficient, but exported wine and silk; its protected harbor played an important role. In their poems, the poets Herodas and Theokritos provide witty sketches of the life of all strata of urban and rural Kos, from the aristocracy to the slaves.

From the 2nd century BC BC Kos was part of the Roman Empire , later the Byzantine Empire . The island was conquered by the Venetians in 1204 and again by the Byzantines in 1262. They ceded these to the Genoese , who sold them to the Johanniter in 1309 . In 1457 and again in 1523 the knights were threatened by an Ottoman invasion. Many residents were enslaved or left the island with the knights in 1523. This was settled by Turks. The Ottoman Empire ruled Kos for almost 400 years, until the island came under Italian control as Coo in 1912 . Italians were also settled here.

In the company "Eisbär" on October 3, 1943, the German Wehrmacht occupied the island until the end of the war . 3,145 Italian and 1,388 British soldiers were captured. During this operation the Kos massacre of captured Italian officers occurred . In 1947 the Italian Aegean Islands , including Kos, were handed over to Greece.

On the night of July 20 to 21, 2017 at around 1:30 a.m. local time, a seaquake with a magnitude of 6.7 on the moment-magnitude scale occurred , which caused destruction, especially in the capital Kos, with two fatalities and at least 100 injuries demanded. A small tsunami flooded the port.

→ Main article : "Greece" in the article Refugee crisis in Europe from 2015

Due to its proximity to the Turkish coast, Kos (also on some neighboring islands, especially Lesbos ) is an important destination for migrants who cross over from the Turkish coast by boat. In connection with the planned construction of a registration center for refugees on Kos, violent clashes broke out between residents and the police in February 2016, as residents fear that tourism, the island's main source of income, will be impaired by the refugees.

In the local elections in 2010 Konstandinos Kaiserlis, who was not a party to the election, won the runoff election with 53.55% at the head of an electoral alliance of the Democratic Left , making him mayor. In the municipal council do not apply:

The island is known for its long sandy beaches with large hotels, but it also offers the charm of remote villages. The tourism is the main industry.

The fertile plain in front of the Dikeos is used for agriculture. Vegetables and grains as well as grapes , almonds , figs , olives and citrus fruits are grown. In the 1920s, the Italian occupiers tried to improve the water supply. Among other things, they created the Pyli reservoir .

Since 1994, the Greek state electricity company DEI ( ΔΕΗ ) has been operating an oil power plant near Mastichari . The 100 MW system is also connected to the islands of Tilos and Nisyros in the south and Kalymnos and Pserimos in the north via an undersea cable.

The subsidiary PPC Renewables SA of DEI (ΔΕΗ), together with C.ROKAS SA, a subsidiary of the Spanish energy company Iberdrola Renovables near Kefalos, has been running a wind turbine with a capacity of 4.2 MW since February 2002 . The plant is connected to the oil power station at Mastichari.

In the past, the island's rubbish was collected in rubbish dumps and burned. For some years now, the islanders have also been separating their rubbish for recycling. A few years ago, a sewage treatment plant was built in the southeast of the island.

Many of the beaches have now been awarded the blue flag and have received the international award for sustainability. The beaches are checked at regular intervals for the quality of the water and environmental management. Private environmental campaigns seek further improvements in environmental and animal welfare so that tourists are not deterred by the garbage and the lack of respect for animals.

The airport Kos Hippocrates is served all year round by scheduled flights of Olympic and Aegean Airlines from Athens and Rhodes . During the high season between April and October and occasionally in the low season, charter and low-cost airlines land with holidaymakers from many European countries.