from Wikipedia, the free encyclopedia
This is the spotted version , flagged on August 25, 2020 . There is 1 pending change that has yet to be viewed.

The title of this article is ambiguous. Further meanings are listed under Epidaurus (disambiguation) . 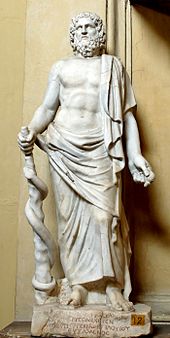 Epidauros ( ancient Greek Ἐπίδαυρος , Latin Epidaurus ) is the most important ancient place of worship for the healing god Asklepios ( Asklepieion ) and his father Apollon in Greece . It is located in the area of ​​today's village Lygourio (municipality Asklipiio, municipality Epidavros ) in the Peloponnese in the Argolis region about 30 km from the city of Nafplio and about 13 km from Palea Epidavros . It has been a UNESCO World Heritage Site since 1988 .

The first traces of human settlement in the area of ​​Epidaurus were for the time of the 3rd millennium BC. It was found on a hill about 2 km away from the later cult area, a part of the Kynortion mountain . In the 7th century BC The first place of worship was established here, the remains of which could be discovered using an ash altar (= heaped ash remains of the offerings). The god Apollon Maleatas was worshiped here, for whom a small, simple temple was built, which was later expanded to include a stoa . In Roman times this facility was supplemented by a cistern , a well and a building with a courtyard. It is astonishing that this site was in use until the 5th century AD, although the worship of Maleatas had already been taken over around a millennium earlier in the plain of the nearby Epidaurus itself through the identification of Asclepius with this god.

In Epidaurus itself there was initially a place to worship Apollon , more precisely Apollon Maleatas. Since the 5th century BC However, Asklepios takes the side of his mythological father Apollo. Although Apollo is still venerated in its own temple, it is increasingly the healing god Asklepios who lures pilgrims and those seeking healing to Epidaurus. According to a Greek myth , Asclepius was born in this place. Nevertheless, there were other sites that claimed this fame for themselves, often even with older claims, such as the Trikka in Thessaly . The upswing of the Asclepius cult is probably related primarily to the plague epidemic in Athens and the establishment of the Asclepius sanctuary there at the foot of the Acropolis . Since the Epidaurs knew how to praise their place as the birthplace of God, it developed in the 5th, but at the latest in the 4th century BC. BC to the most important sanctuary of this God and became very rich. This can be seen above all from the lively construction activity that took place during this period. Due to the increased importance, epidauric daughter shrines emerged in the course of time in numerous places in the ancient world, for example in Athens, Pergamon or Rome .

During the Peloponnesian War and in the period that followed, Epidaurus sided with Sparta . 323/322 BC The city was involved in the Lamian War .

In the 1st century BC The place was attacked and plundered several times by pirates. More devastating than these raids, however, was the sack of the holy place by the Roman Sulla around 85 BC. He gave his soldiers numerous offerings and cult objects as pay.

However, the Romans later rebuilt the sanctuary. In the 2nd century AD in particular, building activity started again, which shows the continued importance of the place.

However, towards the end of the 4th century there was again devastating destruction. The Goths under their leader Alaric I destroyed large areas of the entire sanctuary. Some parts are being rebuilt piece by piece; The theater, however, was "buried" under rubble and trees for centuries and was thus almost completely preserved; today it has been exposed.

With the triumph of Christianity , the old places of worship increasingly lost their importance. This development can also be seen in Epidaurus. In the year 426 AD the "official" closure of the plant took place.

Research envisions a visit to the Asclepius sanctuary as follows:

The Asklepieia are so-called Panhellenic Games such as those in Olympia , Delphi , Isthmia or Nemea . However, those in Epidaurus were not as important as those just mentioned. Since the 5th century BC They took place here in Epidaurus every four years, nine days after those in Isthmia. Originally it was purely athletic competitions, later cultural disciplines were added.

Look at the orchestra

Look at the ranks
→ Main article : Theater of Epidaurus

The largest and best preserved building of Epidaurus is the large theater built into a slope with a view of the mountainous landscape of the Argolidae . It dates from the 4th century BC. BC (~ 330 BC), i.e. from late classical times and, according to Pausanias, is said to be the work of a Polyklet . Especially the large, semicircular grandstand (koilon) , which was renovated around 170/160 BC. BC can accommodate up to 14,000 people, impresses today's visitors too. The round orchestra , the venue of the choir in the classical antique drama, was closed at the rear by a mighty stage house (skene) , of which only the foundations are preserved today. The skene was once used as a changing room, for storing important theater props and - after a change in performance practice at the beginning of the 3rd century BC. BC - also as a performance and performance location for the actors. The stage wall was either painted with pictures or hung with panels, so that the theater backdrop could be created for the respective play.

The theater has excellent acoustics so that every word can be heard from the top rows. This is presumably achieved by the downwardly curved shape of the seat stones. A popular "acoustic test" in the theater of Epidauros is dropping a coin on the stone slab in the center of the stage ring, which can also be easily heard by the top tier.

The theater is one of the two venues of the Athens & Epidaurus Festival, which has been held every summer since 1952 .

The ancient guest house ( Katagogion ) can only be seen today in its foundation walls. It was once a large, two-storey building that offered around 160 rooms for pilgrims and those seeking salvation. Just the size of this from the 4th century BC. The building, which dates back to 7 BC, bears witness to the importance of Epidaurus.

The remains of the Abaton

The Abaton is a rectangular building (21 m × 24 m), whose beginnings in the 6th century BC. Go back BC. This makes it the oldest building in the holy district. At the time of the veneration of Asklepios, it was probably used as a dormitory for the patients. The sick lay down for healing sleep ( temple sleep ) and waited for God to heal them.

The Propylaea represent the actual entrance to the ancient Epidaurus. The visitor first walked through the two porticoed halls, each with six columns, before entering the holy street in the direction of the holy district. These entrance halls were probably built between 340 and 320 BC. Built in BC.

The temple for the god most revered here appears astonishingly small (23 m × 11 m). The building was at the beginning of the 4th century, according to the research by Sebastian Prignitz around 400-390 BC. BC, built in the Doric style by the architect Theodotos von Phokaia. That it must have been the most important temple of the entire complex can be guessed from the description of the associated cult image of the god. It is said to have been made by Thrasymedes of Paros around 350 BC. In imitation of the statue of the Olympian Zeus designed by Phidias from ivory and gold.

Reconstruction work on the Tholos in Epidaurus (2002)

From the point of view of architectural history, the most interesting building in the complex is the so-called Tholos or Thymele, as it is called on local inscriptions. It is a round building surrounded by 26 Doric columns, which has a ring of 14 Corinthian marble columns inside  , which represent one of the early important examples of this column order. The Tholos was built between 365 and 335 BC. Built by Polykleites in the 4th century BC , although only remnants of the foundation walls are left today.

Tholos buildings were originally purely sacred in character, but later served various purposes. The use of this striking building in Epidaurus remains unclear to this day, not least due to a labyrinth-like structure below the ancient level of the Tholos. Possibly it was a symbolic tomb for the man / the hero Asklepios, with which the building would have formed an antipole to the temple, in which the divine aspect of Asclepius was venerated. The labyrinth could have been a model of God's underground kingdom. The close connection of the Greek hero cult with chthonic elements and the earth-related snake symbolism of Asclepius would fit in with this. Whether the labyrinth could be entered after completion, as a possible sacrificial site in its center suggests, or whether knowledge of its existence was sufficient, also still needs to be clarified.

At the beginning of the 21st century, attempts were made to restore and partially reconstruct the Tholos building (as well as the fountain house next to it).

The 5th century BC is located in a natural depression. The stadium of Epidauros, which originated in the 3rd century BC and is overall much better preserved than the historically more important stadium of Olympia . The running surface is 21.5 meters wide and 181.3 meters long. The launch system and the rows of antique seats on the long sides are still partially there - on one side they are as they were excavated, on the opposite side they are arranged according to antique models. The seats are partly carved out of the rock and partly bricked. The places of honor - seats with backrests - were on the southern long side. The stadium is connected by an underground corridor to the palaestra and the gymnasion, the places where the athletes stayed to prepare for competitions. For demonstration purposes, competitions are still held in the stadium today.

The foundation walls of this training building for athletes and the later Roman Odeon are well preserved. In 2007, work began on rebuilding the entrance gate to give tourists an impression of this building.

Between 1905 and 1907 a small museum was set up on the sanctuary area, in which statuettes, the small cult figures made of ceramics and marble, are shown, some statues of the venerated gods, a model of the Tholos and other objects that were found during the excavations were found.