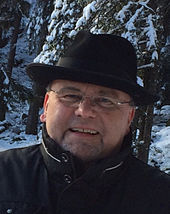 Werner Erwin Gerabek (born July 14, 1952 in Gerolzhofen ) is a German historian , Germanist and medical historian as well as founder and managing director of the German Science Publishing House (DWV).

In 1998 Gerabek founded the Deutsche Wissenschafts-Verlag (DWV) in Würzburg , which he still manages today.

Due to his research on the history of German-Turkish scientific relations in medicine, Gerabek received the Ataturk plaque from the Medical Faculty of the Military Medical Academy Gülhane in Istanbul in 1998 .

Gerabek's main areas of work include the history of medicine and dentistry under National Socialism. Other areas of work are the medicine and anthropology of the German Enlightenment and Romanticism , the history of dentistry, the Würzburg medical history and medical-historical lexicography. He is an employee of the Neue Deutsche Biographie , for which he has so far written 45 articles about doctors. He also works on medieval medicine, including as a reviewer for the German Archive for Research into the Middle Ages , the publication organ of the Monumenta Germaniae Historica (MGH), and as a contributor to the Lexicon of the Middle Ages and the author's lexicon . In 1998 he wrote eighteen ergographic articles on Nobel Prize winners for Physiology or Medicine for the Harenberg Lexicon of Nobel Prize Winners . In 2005 Gerabek published with Bernhard Dietrich Haage , Gundolf Keil and Wolfgang Wegner the encyclopedia “Pschyrembel” planned around 1998 , for which he wrote 164 articles himself.

Gerabek has published more than 400 papers to date and supervised numerous dissertations at the universities of Würzburg and Regensburg as a doctoral supervisor. A doctoral student Gerabeks received the “Research Prize on the Role of the Medical Profession in the Age of National Socialism” from the German Medical Association for her dissertation on the SS dentist Willy Frank .

Gerabek works as a reviewer for the history of medicine for the German National Academic Foundation , the Alexander von Humboldt Foundation and the Swiss National Fund for the Promotion of Scientific Research (SNSF). He also works as an expert for Wiener Klinische Wochenschrift . Gerabek is also a member of the National Competence-Based Catalog of Learning Objectives in Dentistry (NKLZ).