The science of history is the methodically secured research of aspects of the human past or history on the basis of a critically analyzed and interpreted tradition (sources) under a specific question .

History is a cultural or human sciences that deals with the history of people and human communities, while natural history belongs to the individual natural sciences . Today, the history of science, especially with related issues ( historical anthropology ), is therefore also a special area of anthropology .

The science of history is characterized by a critical method, i.e. its prerequisites, methods, trains of thought and results must be rationally debatable or intersubjectively verifiable (and at least in principle falsifiable ), and one always proceeds in a verifying manner and striving for extensive objectivity ( see historical-critical method ). Historical sources , which are collected in the course of research and then evaluated according to the rules of the subject, form the basis. The focus here is on the written certificates . History is also closely related to archeology , which mainly uses non-written sources, and political science . Due to the special importance of texts and hermeneutics for historical research, there are also points of contact with literary studies .

In the study of history, it is less a matter of merely preserving and disseminating the existing knowledge about man's past, but rather of increasing it. The historical material and the historical material are basically infinite, since new sources and perspectives on the past are constantly emerging. The latter in particular ensures that new insights are continually achieved and older positions are revised due to changed questions and paradigm shifts, also with regard to epochs far back. The sources - written as well as material - always require interpretation in this context, they do not speak for themselves. Methodical rules must be observed, which modern historical science has formulated over the course of two centuries, in order to avoid plausible and logically permissible interpretations from inadmissible ones to be able to separate.

Researching, interpreting, linking and deepening are the focus of the work of historians. The researcher always leaves

As in any science, there is an increase in knowledge in the attempt to uncover and correct errors and one-sidednesses of earlier researchers (research history). The questions asked of the past change over time. They are often related to new social science theories, in the light of which the sources and relationships can be interpreted differently.

Historians are called historians (from ancient Greek history / Historia = "exploration, exploration"). A branch of historical science that deals with the basics of the subject history, is the History . The subject is practiced worldwide primarily at universities and specialized institutes, as well as at larger and local museums. There are also many people who are historically active outside of their profession on a scientific level, e. B. in regional and local history . There are also numerous historically interested laypeople who sometimes make important contributions, but who often make serious errors due to methodological deficiencies.

In a gray area for historical studies, there are popular scientific presentations that are aimed at a broader audience without precise evidence . It can happen that they oversimplify the story or even falsify it (intentionally or unintentionally). Sometimes the borderline to pseudoscience is blurred in popular scientific work , which works in a methodologically inadmissible manner and thus produces scientifically untenable results. Good popular scientific works, on the other hand, spread historical knowledge outside the specialist world. Ideally, they can also make it clear to a broader public that the current picture of the past is always a more or less plausible (re-) construction and interpretation . Some historians like Golo Mann even believe that good historiography is more of a literary art than a science, but an art that is based on the knowledge of science.

→ Main article : History of the science of history

The science of history has its own history. The history of historiography is about earlier historians , their works, partly about the circumstances under which historiography was previously practiced, and also about how interests and issues have changed. Herodotus is considered the father of historiography . His, however, did not yet follow the rules of modern research, but saw itself as a literary-philosophical work of art. Even in antiquity, historiography set some standards with authors like Thucydides , which Giambattista Vico has drawn on in modern times. But it was not until the 19th century ( historicism ) that historical researchers in Europe began to deal more closely with history , taking into account scientific criteria ( heuristics , source criticism , textual criticism , objectivity ). In the 1920s, under the aegis of Marc Bloch and Lucien Febvre, the Annales School began to be established in France , which today is closely related to the École des hautes études en sciences sociales (EHESS) in Paris . This still publishes the magazine founded by the two historians.

The theory of history (history) deals on a theoretical level with the fundamentals of the subject, especially with the question of how historical knowledge is possible, how it comes about and what it is used for. By recognizing his own, often unconscious, assumptions, a historian can avoid mistakes.

History didactics belongs to the science of history, not to education , because teaching contemporaries about history was the original concern of historians. It is primarily concerned with the way in which the historical consciousness in school and extracurricular educational processes as well as in the historical culture deals with the past and tradition .

The historical-critical method was developed and refined in examination of the written sources in the 18th and 19th centuries. As before, texts are clearly at the center of historical studies. However, there are no written sources for many historical facts.

Social science methods (including statistics in particular ), which can also quantitatively record mass phenomena , go beyond them. Furthermore, scientific methods - e.g. B. the C14 method , dendrochronology and DNA analysis (especially for grave finds) - increasingly the historical methodology . New and / or improved data analyzes have also become possible with the invention and continuous further development of the modern computer . Complex statistical methods of time series analysis are becoming increasingly important in historical sciences.

The area of ​​the various methods used in historical studies should not be confused with historical methodology , which is a sub- discipline of historical didactics.

Spatially and geographically, history can be broken down into world history and the history of individual continents ( Europe , America , Asia , Africa , Australia ). These include countless national , regional and local stories as well as migration stories such as the migration of peoples or the settlement in the east .

In terms of time, history is divided into epochs .

The three major eras in European history are

World history means the attempt to present human history in its entirety beyond national or sectoral restrictions. However, the specific representation is always structured according to time and space (see below). Jürgen Osterhammel has made a recent attempt for the 19th century .

Of general history is spoken when the story is meant without themed sections.

The topics are often also the subject of a specialist science, so economic history is also part of economics . It often depends on tradition whether a field is more represented in history (e.g. social history) or in specialist science ( social science ). Contemporary history in particular can hardly be separated from political science .

The archeology , folklore and the history of art require for their items - non-written documents - other methods, their results can be but taken up by the historians. 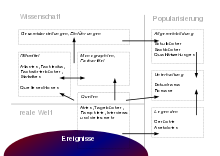 Sources are the interface between the events a historian researches and the science of history. Their products in turn influence each other and ultimately also popularizing works. (The arrows in the diagram only describe the main information paths.)

Sources are the basis for the work of a historian ; New knowledge comes from this occupation. His research results are published in monographs and articles in specialist journals, that is, as secondary literature ("representations"). Third, you use tools. The reference books include:

History in the United States