The title of this article is ambiguous. Further meanings are listed under History (disambiguation) .

Under History is generally understood as those aspects of the past , which people commemorate and interpret them to find out about the character of temporal change and its impact on their present and future to orient.

In a narrower sense is history , the development of mankind , which is why of human history is spoken (as distinct from the natural history ). In this context, history is sometimes used interchangeably with the past. In addition, history as history also means looking at the past in remembrance, in telling and in writing history . Researchers who devote themselves to the science of history are called historians .

After all, history is also used to describe the school subject history , which provides information about the course of the past and provides an overview of events in world, country, regional, personal, political, religious and cultural history.

If one regards history as the past, the following areas can be distinguished:

Only history in this third, narrowest area is the subject of historical studies with its specific method, because it is only through written evidence that what man understands as his history from what he has experienced and how he has appropriated it can be grasped. The focus of dealing with history, the exploration (Greek: history ) of the past, is the sources , i.e. H. timely written records and documents.

A distinction must be made between history as an event and the historical awareness, the image of what has been, which on the one hand is reflected in the self-image of the historical person, on the other hand results from the research and representation based on the existing traditions for the viewer who tries to grasp the event cf. Historiography and History of Historiography ). This subsequent knowledge of history is based on remains and tradition . However, such knowledge is never completely objective, but depends on the historical situation, the perspective of the viewer and the available sources. To enforce a certain perspective against other perspectives (but also the attempt to enable multiple perspectives ) is a matter of historical politics .

History didactics, on the other hand, has set itself the task of facilitating access to the most important areas of history and enabling a multidimensional awareness of history. The teaching of history is the attempt of practical implementation of history teaching. Ideally, not only the previous knowledge of historical studies should be conveyed in terms of content, but also, at least in part, historical-critical methodological knowledge - all the more so as the historical knowledge imparted in school is always only a reconstruction that cannot claim to be truthful.

The portal: History provides access to history from the various history rooms and national histories . The various disciplines of historical studies allow access to specific subject areas of history .

Perspectives and functions of history

“Because history is not an“ exact science ”- it is a humanistic discipline. Its main subject is people, and history, as Thucydides long ago said, is the study not of circumstances but of people in circumstances. Anyone who forgets this because he is in love with his own special area of ​​interest or is fascinated by the modeling activities and ideal types of behaviorists can only be described as simple-minded. " 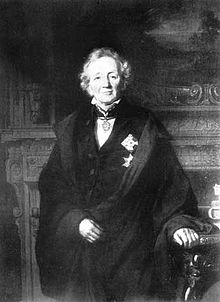 Leopold von Ranke is considered to be one of the founding fathers of modern history, who endeavored to be as objectively as possible when reproducing history.

History can be seen as the result of scientific research. Sometimes it is suggested that the presentation of the results and relationships be viewed as an artistic activity. The historian should present to the reader in a comprehensible, objective and convincing way the course of events as well as their causes and effects, an everyday historical awareness. The philosophy of history tries to bring the course of actions into a superordinate context, an image of history . This is primarily the approach taken by the humanities . Chronology and periodization are essential classification criteria and aids .

Historiometry pursues another approach , which tries to represent events over time in a metric overview.

History as a construction

History also discusses the question of how far the picture of the past it has designed is capable of depicting the actual past. This not only relates to the impossibility of depicting historical situations and processes in their entirety or totality, but is also related to doubts in their sources (not to mention the forgeries). While efforts were made in the 19th century to harmonize contradicting statements from different sources as far as possible, today people tend to accept the fact that the facts of the past have disappeared in an irreconcilable way until new sources have been found. A well-known example of this change is the depiction of Charlemagne's coronation as emperor in Rome, which is described differently in the papal sources than in the sources that arose north of the Alps. While in this case the fact that it cannot be reconstructed in the face of contradicting sources is generally accepted today, in the case of sources that are not confronted with a different or independent representation, it is a much discussed question whether the picture that is drawn of the past on the basis of these sources is is not a construction that has little or possibly nothing to do with what actually happened. Here the process of Jesus or the background of the Constantinian turning point can serve as an example. On the one hand, the question is discussed whether the attempt at a reconstruction should not also be omitted in such cases, and on the other hand, whether such a distinction between “real” and “reconstructed” reality makes sense at all and whether the maxim that is not sufficient is the reconstructed history counts as reality until new findings require correction.

The endeavor to scientifically reconstruct history - if only because of the linguistic determination of how it is conveyed - cannot do without constructive elements. The raw material of history, the totality of the past, can only be made visible or comprehensible through naming, evaluation and spiritual order in the medium of language. According to this, history is (also) the product of historians and people who reflect on the past. “History can only exist if this reflection takes place and is articulated. Outside of this area there is only the present without any depth and dead material. "

Since the presentation of history can also be viewed as an artistic task, there is, conversely, an artistic or literary processing of historical topics without a primary scientific interest in knowledge . For example, the drama Wallenstein by Friedrich von Schiller or the Torquato Tasso by Johann Wolfgang von Goethe are literary works based on historical material without being understood as historical works in the scientific sense.

In addition to literary perspectives, there are forms of artistic engagement with history in the fine arts , especially in history painting , sometimes in monumental forms as in the case of the Peasant War panorama .

The presentation of history, guided by political interests, is the subject of historical politics, which some historians also actively pursue. History politics serves to influence the general formation of opinion in society, especially in totalitarian systems. Depending on the political system, it has typical effects on history didactics and history pedagogy , especially history lessons , museum pedagogy and memorials .

Ways to represent history for lay people and for school purposes