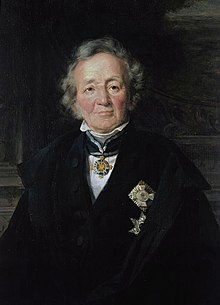 Leopold von Ranke was born as the eldest son of the lawyer Gottlieb Israel Ranke (1762–1836) and his wife Friederike Ranke, b. Lehmicke (1776–1836), born. He was the brother of the theologian Friedrich Heinrich Ranke (1798–1876) and the theologian Ernst Ranke (1814–1888). His nephews were the physiologist and anthropologist Johannes Ranke , the physician Heinrich von Ranke , who was also ennobled in 1891, and the senior pastor Leopold Friedrich Ranke . 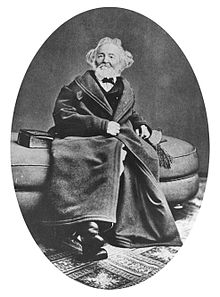 Special stamp from Germany (1995) for the 200th birthday of Rankes

Leopold von Ranke attended the Pforta State School from 1809 to 1814 . He completed his studies from 1814 to 1818 in theology and philology at the University of Leipzig .

From 1818 he was a high school teacher in Frankfurt (Oder) . In 1824 he moved to Berlin and was at the city's University associate professor. From 1827 to 1831 Ranke toured the archives of the former Holy Roman Empire , as well as the Venice State Archives in 1829 , and in 1832 the Prussian Academy of Sciences in Berlin accepted him as a member. In 1834 Ranke became a full professor at the university and in 1841 was appointed historiographer of the Prussian state by King Friedrich Wilhelm IV (the proceeds collected, published as Twelve Books of Prussian History , 1878/1879).

In 1871, because he was visually impaired, he stopped teaching, but resolutely continued to work on his work: he began to rework and add to older works in order to publish his Complete Works . At the age of 80 he began to dictate his world history , a volume of which was published annually from 1881 and which was supplemented from his notes after his death. He died in 1886. His tomb is in the Sophienkirchhof . It is dedicated to the city of Berlin as an honorary grave .

In 1885 Ranke was made an honorary citizen of Berlin .

At the house at Luisenstraße 24a in Berlin-Mitte, a plaque used to indicate that Ranke had lived there from 1844 until his death. In 1888, Rankestrasse in Berlin was named in his honor . There is also a Rankestrasse in Leipzig and Dresden, and there was also one from 1937 in Hanover, where it was later renamed Windthorststrasse after the politician Ludwig Windthorst .

In 1995, Deutsche Post issued a special postage stamp worth 80 pfennigs on his 200th birthday .

In his hometown Wiehe there are several places of remembrance to him and a small museum in the town hall.

Meaning of his work

Ranke is one of the founding fathers of modern history. After the Prussian reforms (around 1810) and the founding of the first Berlin university under Wilhelm von Humboldt , the scientific concept of historicism had prevailed. Historicism differed in its systematic and source-critical approach from the previous primarily philosophical view of history.

Based on this approach, Ranke provided a methodology that combines the old narrative story with the new scientific foundations (with increasing professionalization through the study of history). The historian's task is therefore to show “how it actually was” . Ranke is concerned with the greatest possible objectivity in telling the story. This characteristic of his historiography led to the development of so-called “Neorankeans” in German history in the second half of the 19th century. These include u. a. Erich Marcks , Max Lehmann and Max Lenz . In contrast to historians like Heinrich von Sybel , Heinrich von Treitschke or Johann Gustav Droysen , who also see history with a daily political task, they stand on the methodological basis of Rankes. However, they are also not unaffected by the other current. Objectivity in historiography by no means means neutrality in politics of the day. Incidentally, this also applies to Ranke himself. His works achieved the most lasting effects primarily on the Reformation, the Roman popes, and English and French history in the 17th century. In the international historiography of his time there are few who can compete with him. These include u. a. Jules Michelet and Thomas Babbington Macaulay .

For Ranke, the aesthetics of the language were just as important as the actual content. Some accuse him of being devastating and, in some cases, still having an impact today, that his sophisticated language does not keep literary form and intellectual discovery apart.

According to its importance, Ranke had a large number of important students, who in turn set up their own schools. His oldest and probably most important Heinrich von Sybel for the development of German historical science should be mentioned here. Even Jacob Burckhardt , Carl von Noorden and Wilhelm Maurenbrecher have temporarily studied with Ranke in Berlin.

Ranke's historiography is essentially the political history of states. The people who appear have some kind of political significance. The exploration of the world of states is essential to him. The social aspects such as those of the lower social classes usually do not arise with him. One of the few chapters in his historiography where they are so revolutionary that they cannot be ignored is the topic of the German peasant war . This conception of history is particularly evident in the history of the Reformation and that of the 17th century. But it is not without consequences for the history of the 19th century either. At the end of the 19th century, the so-called Rankeans and Karl Lamprecht started a methodological dispute in historical studies , which was actually less a factual dispute than a disparagement of Lamprecht's new approach.

Ranke published the historical-political magazine from 1832 to 1836 . Since he wrote the majority of the articles in the magazine himself, it is now regarded as the “unique personal creation of its editor with an everlasting effect”.