The General German Biography ( ADB ) is a biographical reference work that was published in 56 volumes from 1875–1912 (reprinted 1967–1971) by the Historical Commission at the Royal Academy of Sciences (Munich) under the editorship of Rochus Freiherr von Liliencron and in Leipzig has been published by Duncker & Humblot . The ADB is a first-rate reference work on around 26,500 people who died before 1900 and who worked in German-speaking countries. This also includes the Netherlands up to 1648.

Since it was founded in 1858, the historical commission at the Bavarian Academy of Sciences had plans to create a biographical reference work for Germany. In 1868, at the request of the commission chairman Leopold von Ranke, the project was resumed and Rochus von Liliencron was entrusted with the management. From 1873 Liliencron was supported by Franz Xaver von Wegele as co-editor, who took over the management in the field of political history.

In 1869 the main features of the company were laid down. The work has been designed for scientific and general use. Therefore, the biographies of people who, in the opinion of the Commission, were of predominantly scientific interest were included. No living persons were included and only countries "of originally or partially German nationality [...], but only insofar as they remained in a closer spiritual connection with the overall life of Germany" were taken into account.

Initially, twenty volumes of fifty sheets each were planned. The volumes should appear every six months so that the processing time would have extended to ten to twelve years. The scope of the biographies was divided into classes. The five hundred most important people who were placed in class 1 were given the space of a printed sheet. Originally around 40,000 biographies were to be printed in the 20 volumes. However, it was concluded that there was not enough space for the individual biographies and the number was reduced by half. Nevertheless, due to the greater length of the short biographies, only 953 articles fit into the first volume instead of the planned 1000.

By 1899, 45 volumes had been reached by 1,418 employees. 23,273 names were mentioned. But when the letter Z was reached, the ADB did not end. From the first volume onwards, additions and corrections to the biographies in the previous volumes were added at the end of each volume. In order to be able to add other people who had died in the meantime and to be able to add other missing biographies, supplements with biographies on people who had died up to 1899 were published from volume 45, which extended over a further nine supplement volumes. Volume 56, with which the work was completed in 1912, consists of a general register of all entries.

The articles in the ADB have the character of a manual ; they reflect the research status of the respective year of publication. In spite of their age, many of the articles represent the latest state of research if the respective persons have not been dealt with in the scientific literature after the publication of the ADB volume.

If, on the other hand, there is more recent research on a person, the technically outdated biographical articles of the ADB can often provide more detailed information, for example extensive information on the work or references to older literature or historical sources that are no longer generally accessible today.

In articles about people from the 19th century, many authors write about people they know personally or who they adore, although problematic biographical aspects may be weakened or not dealt with at all without critical distance. In such cases in particular, the ADB itself has become an interesting and important historical source in the history of science . 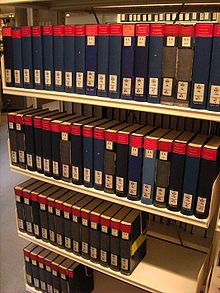 Volumes of the General German Biography

In May 2003, the Historical Commission at the Bavarian Academy of Sciences and the Bavarian State Library published the Electronic General German Biography (E-ADB), which was based on the scanned pages of the ADB. The individual articles could be found via an index; The articles in the NDB were also included in this index.

In a project supported by the DFG , the Allgemeine Deutsche Biographie and the first 22 volumes of the Neue Deutsche Biographie were made available as electronic full text in February 2010 and the website was comprehensively renewed. The name registers with updated additional information and the bio-bibliographical information (including links to the GND ) have been integrated into the German Biography (DB) and can also be researched via the biography portal .

In August 2005, independent of the efforts of these providers, Wikisource began to record the general German biography in full text. Since November 2008 all ADB articles have been available with the help of text recognition , until 2011 all texts were proofread by volunteer Wikisource employees, linked to other ADB entries as well as to most Wikipedia articles, GND entries, and possibly also to Wikisource author pages . Another correction process was completed on April 9, 2020, so 26,345 articles have been corrected.