The Bavarian Academy of Sciences (BAdW) is a corporation under public law with its seat in Munich . The Bavarian Academy of Sciences is the largest, most research-intensive and one of the oldest of the eight state academies in Germany. It conducts innovative long-term research, networks scholars across disciplines and national borders, works with its scientific expertise in politics and society, promotes young scientists and is a forum for dialogue between science and the public. The academy operates the Leibniz Computing Center (LRZ) and the Walther Meißner Institute for Low Temperature Research (WMI) in Garching . It is also a member of the Union of German Academies of Sciences . 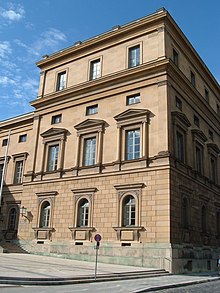 Bavarian Academy of Sciences Alfons-Goppel-Str. 11 in the Munich Residence

The academy was founded in 1759 by Elector Maximilian III. Joseph founded. Count Sigmund von Haimhausen became the founding president of the institution, initially known as the Churbaierische Akademie , in 1759 and remained in office until 1761, repeatedly in office from 1771 to 1779 and 1787 until his death in 1793. In 1779 he became the academy's first honorary president. The establishment is due in particular to Hofrat Johann Georg Lori (1723–1787), the founder of the Bavarian Scholarly Society . Originally the academy was divided into two classes, a historical and a philosophical, whereby philosophy in the scientific understanding of the time also included mathematics and physics .

Since 1783, the academy has been housed in the Wilhelminum , the former college building of the Jesuit order on Neuhauser Strasse in Munich.

After the Second World War , the academy was housed in various alternative quarters near the university, then mainly at the former headquarters of the dissolved German academy. She moved into her domicile in the north-east wing of the Munich Residence in the anniversary year of 1959.

The first female members were the ethnologist , zoologist and botanist Therese von Bayern as an honorary member in 1892 and the classical philologist and papyrologist Medea Norsa as a corresponding member in 1936 .

→ Main article : List of presidents of the Bavarian Academy of Sciences

The current president is the sinologist Thomas O. Höllmann , who succeeded the mathematician Karl-Heinz Hoffmann on January 1, 2017 . Its predecessor was the legal historian Dietmar Willoweit .

Research project of the academy

The academy conducts long-term basic research that secures and documents our cultural assets. The focus is on the humanities, geosciences, low-temperature physics and information technology. In over 60 projects with a total of more than 400 employees, series of measurements, editions, models, catalogs, dictionaries and other scientific publications are created.

By becoming a member of the Society of Friends (GdF) , anyone interested can become a sponsor of research projects at the Bavarian Academy of Sciences.

The academy publishes the magazine "Akademie Aktuell" three times a year, which provides information on developments in research and science with special issues. The academy's work plans are also presented.