The Berlin-Brandenburg Academy of Sciences ( BBAW for short ) is an institution for the promotion of science with headquarters in Berlin and Potsdam , which was founded in 1992 by contract between the states of Berlin and Brandenburg . It is the traditional successor to the Prussian Academy of Sciences , whose members included the Brothers Grimm , Wilhelm and Alexander von Humboldt , Lise Meitner , Theodor Mommsen , Albert Einstein and Max Planck .

The Berlin Academy of Sciences has been called since: 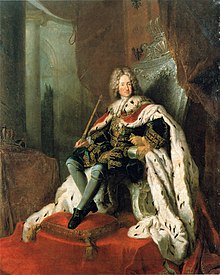 Friedrich I. , founder of the Academy of Sciences

The academy leads its tradition on in 1700 by Elector Friedrich III. of Brandenburg, the later King Friedrich I in Prussia, founded the Electoral Brandenburg Society of Sciences . It achieved world fame as the Prussian Academy of Sciences . On July 1, 1946, it was reopened by the Soviet military administration in Germany as the German Academy of Sciences in Berlin in the former building of the Prussian State Bank at Jägerstrasse 21-23.

In 1972 it was renamed the Academy of Sciences of the GDR , which functioned both as a learned society and, comparable for example to the Max Planck Society , as the supporting organization of a research community of non-university research institutes. In the course of the reunification of Germany , the GDR Academy was dissolved at the end of 1991 and the Berlin-Brandenburg Academy of Sciences and Humanities (BBAW) was subsequently reconstituted in accordance with the State Treaty of the Federal States of Berlin and Brandenburg of May 21, 1992 as a legal body under public law with the Right of self-government. In 1993 it began its work under the leadership of the founding president Hubert Markl . The Academy President has been Martin Grötschel since 2015 . The institution has its headquarters in Berlin at Jägerstrasse 22–23, a former bank building that until 1945 housed the Prussian Sea Trade .

79 Nobel Prize winners shape the history of the Academy and its predecessors. Today, with around 200 elected members, it is a scientific association that transcends specialist and national borders and bears special responsibility for the science location in the capital region. In interdisciplinary and transdisciplinary working groups, an innovative form of work in the German academy landscape, the academy members deal with questions about the future of our society as well as with work on the development of cultural heritage. With around 300 employees, the academy is the largest non-university research institution in Berlin-Brandenburg. Internationally, it is contractually networked with around 20 academies on four continents.

The house at Jägerstrasse 22/23 is the oldest preserved building on the edge of Berlin's Gendarmenmarkt . It was built in the years 1901–1903 on behalf of the Seehandlungsgesellschaft and later the Prussian State Bank according to plans and under the direction of the architect Paul Kieschke . The three-storey building in the neo-baroque style on Jägerstrasse is equipped with a sandstone facade . The jewelry works on the house were reduced in 1936–1940. Inside there were changes during these years, as a four-story administration building was added (number 23). This has a shell limestone cladding and was designed by Hubert Lütcke .
In the large bank room, on the occasion of the change of use for the academy (after the Second World War), the previous walls and columns were clad. This was followed by jewelry in the contemporary understanding, for example a stone relief by Jürgen Karnopp in 1984 .

Other locations are the former Prussian State Library Unter den Linden 8 in Berlin-Mitte and the former house Stichnote Am Neuen Markt 8 in Potsdam.

Memorial plaque on the house at Markgrafenstrasse 38 in Berlin-Mitte

24 academy projects and a large number of third-party funded projects make the academy the largest non-university research institution with a humanities profile in the region. Her projects include large German and foreign-language dictionaries, the edition of texts and sources from antiquity, the Middle Ages and modern times, the works of "classics" from various fields of science and documentation.

In interdisciplinary working groups and initiatives - a form of work that is innovative in the German academy landscape - academy members deal with questions of the future of our society together with external colleagues and young academics. With the results presented as research reports, memoranda and recommendations and their public discussion, the Academy makes an active contribution to political and social advice.

edoc server of the academy's library

The BBAW has an electronic platform, the edoc server, for electronic long-term archiving of publications by employees and for publications from academy projects. The server is operated by the academy's library.

Together with the Leopoldina , the Berlin-Brandenburg Academy of Sciences founded the Young Academy in June 2000 . The number of members is limited to a maximum of 50. Outstanding representatives from the young academics with a doctorate are elected as members for five years. The main task of the Junge Akademie is to maintain the interdisciplinary scientific discourse among outstanding young scientists and to promote initiatives at the interfaces between science and society.