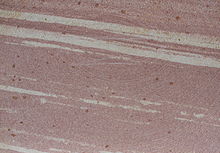 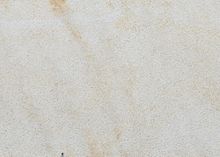 Sandstone is a clastic sedimentary rock with a share of at least 50% sand grains , i.e. H. of grains which, according to the general definition of grain size sand, are between 0.063 and 2 mm in size. The grains of sand consist of various minerals , but mostly quartz . 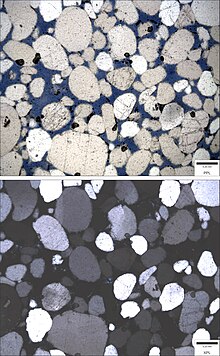 A pure quartz sandstone from the Ordovician of Illinois (USA) in thin section , in the lower picture with crossed polarizers . The material has been impregnated with blue epoxy resin prior to preparation to increase stability and contrast. Therefore, the gaps between the grains appear blue in the picture above.

A sandstone whose sand fraction consists of at least 90% quartz is called quartz sandstone or sandstone in the narrower sense . From a proportion of 25% feldspars one speaks of arkose , with a high proportion of clayey matrix and a proportion of less than 75% quartz in the sand fraction of greywacke . The corresponding transitional forms (quartz proportion in the sand fraction between 90 and 75% each) are called subarcosis or subgrauwacke . Sandstones with a high proportion of primary calcium carbonate are also called sand-lime bricks . These must not be confused with the identically labeled, artificially produced sand-lime bricks . A rock that emerged from a loose sediment, which mainly consisted of sand-sized grains of lime, is usually not referred to as "sand-lime brick", but as limestone , although the name lime sand or carbonate sand is common for the corresponding loose material .

If the proportion of grains larger than 2 mm predominates in the rock, it is a conglomerate (with rounded grains = boulders) or a breccia (with angular grains = fragments). In contrast to arkoses, greywacke and sand-lime bricks, conglomerates and breccias are not considered sandstones in a broader sense either. The transitions from a coarse-grained sandstone to a fine-grained conglomerate or a fine-grained breccia are fluid.

Sandstone is produced by the cementation ( cementation ) of loose sand and admixtures of coarser or finer sediment particles (clay, silt, pebbles). In contrast to chemical and biogenic rocks (mainly composed of remains of living beings), such as limestone or coal , it is of clastic (detritic) origin, i.e. it consists of minute debris from weathered and eroded rocks. Quartz occurs primarily in many igneous rocks . Since quartz is also relatively resistant to chemical weathering , quartz particles the size of sand grains can accumulate strongly in the rock cycle (exogenous cycle), while other minerals that potentially form sand grains chemically decay relatively quickly. That is why most sandstones consist mainly of quartz.

The most important production areas for sandstones are the shallow seas near the coast, the shelves . Most of the sand comes from the mainland and is transported to its final storage location by rivers and ocean currents. In deeper sea regions remote from the coast, however, mainly fine-grained sludge is deposited, from which sandstone cannot be formed. Exceptions are the sandstones of turbiditic deposits . These emerge from the sandy material of the shelf edge that slides down the continental slope . But there are also numerous sandstone deposits that have emerged on the mainland. The fluvial, i.e. H. the sandstones deposited by rivers are well above the Aeolian ones, i.e. deposited by the wind.

The deposit environment of a sandstone can u. a. based on the sediment structures it contains. These include characteristic forms of oblique stratification or certain trace fossils . Body fossils are also important indicators of the storage space. For the differentiation of fluvial from Aeolian sandstones, the grain size and above all the grain sorting ( textural maturity ) are important: Aeolian sandstones are always relatively homogeneous-fine-grained. The mineral composition and the roundness of the grain also provide clues as to how it was formed. A relatively low proportion of quartz (low compositional maturity) and low degrees of grain rounding are typical for sandstones that were deposited in mountain forelands or foreland basins as part of flysch or molasse series , greywacke or arkose.

Sandstone with skolithos (burial burrows of worms) from the Cambrian

Due to the pressure of the younger, overlying deposits and the precipitation of minerals that are dissolved in the sea or groundwater, often also due to the minerals contained in the sandstone itself, the sand solidifies ( diagenesis ). This process takes place at different speeds and takes between a few decades and several million years.

When cementation is called the natural solidification of the sand by the precipitation of minerals in the voids between the sand grains ( pore space ). The cement can consist of various minerals:

A high primary content of clay minerals or mica can hinder cementation as this reduces the porosity and prevents the penetration of formation water. An even more effective cementation prevention is achieved by impregnation with petroleum .

Most sandstones have only a single cement mineral within at least a single bank . Different layers in a sandstone sequence can each be cemented by different minerals, e.g. B. due to grain size differences. So coarse-grained, large-pored sandstones are more carbonated and more fine-grained ones are more quartzitic. Several generations of cement from different minerals within one bank are the exception and can only be found in larger pores. The younger generation of cement is surrounded by the older one.

Sandstone is a rock that is very widespread on the earth's surface and occurs on practically all continents and has been handed down from almost all ages of the earth's history. It occurs in various geological contexts, e.g. B. in the overburden of the weakly subsidiary continental tables or in (formerly) more subsidiary epicontinental sedimentary basins. Most of these sandstones were formed under sea cover. In Germany this includes the sandstones of the Elbe Sandstone Mountains and the Zittau Mountains . In central and southern Germany widespread fluvial sandstones of red sandstone . Sandstones in the subsurface of the North German Plain and the North Sea are important storage rocks for crude oil and natural gas. In the Alpine region, sandstones occur in the Molasse zone and the Grauwackenzone, among others . In general, however, the proportion of sandstones in the geologically young Alpine folds is rather low, which is due to the fact that these emerged from broad tropical shelves with predominantly carbonate sedimentation. Even in the geologically very old continental shields there are only a few sandstones, as these regions are in constant uplift and therefore today almost exclusively rocks occur that were formed deep in the earth's crust or were once sunk into it and were thereby greatly changed.

Due to the predominance of quartz in Central Europe, sandstone generally results in nutrient-poor soils that also tend to acidify. Depending on the water supply and the depth of development of the soil, one can find ranks , brown earths or podsoles . Most of these soils are used for forestry (for example in the Thuringian woodland ).

Exceptions, however, are sandstones with a high proportion of carbonate or clay as well as sandstone sequences in which calcareous or clayey layers are embedded. The soils on these rocks are then usually richer in nutrients and can also be used for agriculture. An example are sandstones from the Keuper (Upper Triassic) in southern Germany. 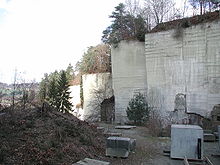 Quarry in the characteristic greenish Bernese sandstone in Ostermundigen

Sandstone is a common building material and was often used for paving , sculptures, and especially facades . Sandstone buildings that shape the cityscape can be found in Bern , Wroclaw , Dresden , Düsseldorf , Hamburg , Nuremberg and Prague , for example . Like many other sacred buildings, the Freiburg Minster is largely made of sandstone. In Dresden, a soft clay sandstone, the Cotta sandstone, was used for decorative interiors and sculptures, and a quartzite-bonded sandstone from the Elbe sandstone mountains, as is still quarried near Pirna , for load-bearing or otherwise stressed architectural parts .

The color of sandstone can vary, just like that of sand , common colors are gray (without admixtures - such as Ruhr sandstone from Hohensyburg ), yellow (due to limonite contained - Ibbenbürener sandstone ), brown, red (due to hematite - as with red Weser sandstone ) and white (as with gray, only the surface reflection is different - example Rackwitzer sandstone ). Among other things, green is the green sandstone that was formerly mined south of the Westphalian Soest ; the glauconite-containing sand-lime brick mined at Anröchte today is a little darker than the green sandstone used since the Middle Ages . 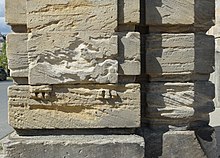 Traces of weathering on a portal pillar made of sandstone in Bayreuth Friedrichstrasse , which let the textures stand out

Basically, freshly broken sandstones are easier to work with than those that have been stored for a long time. Common to all sandstones is the lack of resistance to de-icing salt . The frost resistance varies depending on the variety. Due to the polarity of the deposition direction, a distinction can be made between sandstones cut “in the camp” (parallel to the stratification ) and “against the camp” (orthogonal to the stratification). The resulting textures on the visible surfaces can be very different.

Dry stone walls , built from sandstone reading stones or sandstone that comes from a quarry in the vicinity, are now important biotopes for numerous succulent plants and important retreats for insects . The ungrounded masonry not only provides shelter for spiders and beetles , but also for larger animals such as lizards and blindworms . In wine-growing areas in particular, sandstone dry stone walls shape the landscape of the rivers in southern Germany and the catchment areas of the Rhine and Main .