The brown earth (abbreviation of the German soil systematics: BB) is a frequently occurring soil type of the moderately humid climate with the horizon sequence Ah / Bv / C (enrichment of humus <30% by mass / iron oxidation, new mineral formation / little or not weathered loose or solid mineral substrate). Type-defining processes are browning and silting, also in the subsoil horizon (B). Brown earths develop mainly from silicate, lime-free or lime-poor parent rock.

The properties and thus also the agricultural use depend heavily on the starting material of the soil formation. This is particularly true of the pore distribution and the water and air balance. Basically it can be said that brown earths are easy to work with and have a pH value in the moderately to strongly acidic range. Agriculture and pasture are possible as agricultural uses.

Under the prevailing climate, the natural vegetation would be a mixed forest of red beech with oak or spruce . 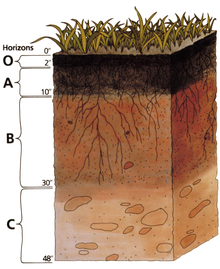 Profile of a typical brown earth

Position in the soil systematics

Brown soils arise from Ah / C soils, such as tendrils , regosols , rendzinen and pararendzinen , through progressive soil development. Depending on the source rock, brown earths differ greatly in their properties. Brown earth from unconsolidated rocks such as B. Boulder clay usually have a medium base saturation and a medium to high usable field capacity (water storage capacity ) and are often used for arable farming.

Brown earth on silicate bedrock on the slopes of the low mountain range is mostly shallow with a high proportion of skeletons , low nutrient supply and usable field capacity. They are mostly used for forestry.

The name brown earth was coined by Emil Ramann in 1905 and initially also included Lessivé soils , which were characterized by clay shifting . At times, more heavily denatured brown earths were referred to as brown loam. The Federal Soil Association (BVB), the Engineering Association for Contaminated Land Management and Land Recycling (ITVA) and the German Soil Science Society (DBG) have named brown earth soil of the year 2008. 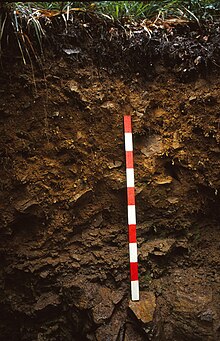 Depending on the additional characteristics and nutrient richness, a distinction is made between a .: