This article covers the genus of plants. For further meanings see spruce (disambiguation) .

The spruce ( Picea ) form the only genus of the subfamily Piceoideae within the plant family of pine plants (Pinaceae). The only species native to Central Europe is the Norway spruce ( Picea abies ), which is also incorrectly referred to as the “red fir” because of its scaly, red-brown bark. 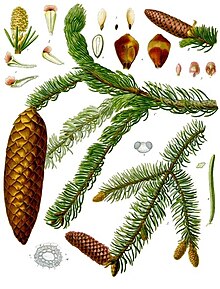 Illustration from Koehler 1887 of the Norway spruce ( Picea abies ) 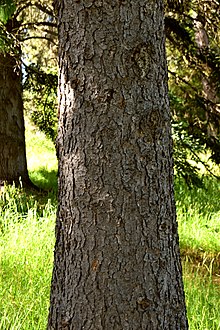 Trunk with bark of the Himalayan spruce ( Picea smithiana )

Picea species are evergreen and single-stemmed trees . As a rule, they reach heights of growth of 20 to 60 meters, in exceptional cases over 80 meters, such as Picea sitchensis . The treetop is conical to cylindrical. The trunk diameter is up to 1 meter, up to a maximum of 2.5 meters; extreme values ​​of up to 4 meters occur in individual species. A shrub-like growth occurs only under special site conditions or in mutants .

All Picea species are characterized by monopodial , acrotonic (on the upper or outer buds) promoted branching . This leads to a tiered crown structure and a pointed crown. The first-order side rungs are arranged in a pseudo-whirling arrangement and thus form individual "floors".

With increasing age, more proventive shoot formation occurs: dormant buds sprout on older branches. In older trees, these can build up a substantial part of the branches and coniferous mass of the crown.

Crown shape and shoot system vary depending on the environmental conditions and are partly genetic.

There are several different types of branching:

Young spruces usually have platy branches. The comb shape usually only appears from the age of 30.

Narrow crown, as it occurs in the so-called "pointed spruce", can, as in Picea omorika, be species-specific, i.e. genetically fixed. However, it can also occur in specific ecotypes or mutants ("spindle spruce"). Mostly, however, it is a site modification ("roller spruce") under high-montane subalpine or boreal subarctic climatic conditions. This modification also occurs in the common spruce ( Picea abies ) native to Central Europe .

Seedlings usually have four to nine (up to 15) cotyledons ( cotyledons ).

Young twigs have fine furrows. These are located between raised backs, which are formed by the sequence of "leaf cushions" (Pulvini). These leaf cushions are interpreted either as axis protuberances or as the leaf base . They end up in a stem-like extension. This extension ("needle stalk") is bark-colored and protrudes from the branch, which makes it look rasp-like. The actual needle sits on the needle stem. These two characteristics - furrows and protruding needle stalks - are specific to the genus Picea .

Buds are often oval to conical. Depending on the type, they are more or less gummy. The bud features are characteristic of each species. Flower buds and the preventive buds occurring in the basal parts, however, often deviate from these species-characteristic features. 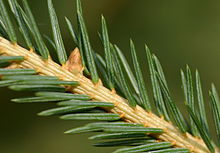 Picea species have the evergreen, needle-shaped leaves typical of conifers , which are usually quite xeromorphic . The needles are separated from the bark-colored “needle stem” (leaf cushion) by a separating layer. Here the needle loosens after it dies: the needle shrinks at the contact surface due to water loss, but the lignified leaf cushion does not. The needles usually stay on the branches for six to 13 years, but they tend to fall off when stressed.

The morphology and anatomy of the needles are essential characteristics for the differentiation of the individual spruce species: needle cross-section, mesophyll structure , arrangement of the stomata and the resin canals .

The needles of each type are usually one of the following two types:

In the side branches of the Picea species, however, the tops of the needles point downwards, so that the white stripes appear to be on the underside of the needles.

The needles are usually 1 to 2 centimeters long and pointed or pointed, in some species even sharp and piercing (e.g. Picea pungens ). 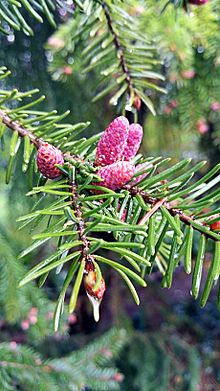 Young spruce cones, beginning of May.
Length: about 15 millimeters

Picea species are monoecious separately sexed ( monoecious ), d. That is, there are female and male flower organs separated from each other on a tree. Bisexual flowers or inflorescences are only found in exceptional cases . The inflorescences are formed on the side shoots of the previous year. Flowering maturity occurs between the ages of 10 and 40 years. The flowering time takes place in the period April to June.

The male flowers are solitary, oblong-egg-shaped and 1 to 2 centimeters long. Initially they are purple to pink, then yellow when ripe. The pollen has two air sacs. The pollination is carried by the wind ( anemophily ).

The female cones usually arise from terminal buds. At first they are erect, but after fertilization they curve downwards. Immature cones are green, red to dark blue and black-violet in color. In some species there is even a color dimorphism , which is explained by a selection advantage of red / purple colored cones in alpine / boreal areas. The cones ripen between August and December and are then mostly brown, ovoid to cylindrical. The seeds fall out between August and winter, sometimes not until the next spring, so they are spread by the wind. Then the cones are thrown off as a whole. The cones are 2 to 20 centimeters long. The cover scales are always shorter than the seed scales and therefore not visible on the cone.

The genus Picea is distributed holarctic . Only in Mexico and Taiwan does it range up to the northern tropic . Different species of Picea are stock-forming in the boreal coniferous forest zone and in the coniferous forest level of many mountains in the climatically temperate, submeridional and meridional parts of Eurasia and North America . There are about seven species in North America; one species there is a neophyte .

Many of the Asian species are found in the mountains of the submeridional and meridional zones. There are a number of endemics here with narrowly defined areas.

In China and Central Asia, several species are found in the continental mountains of eastern Tibet and Turkestan . They form a plant-geographical link to the Siberian spruce ( Picea obovata ), whose area extends from eastern Siberia and Mongolia to the west of the Urals . To the west of this is the common spruce native to Europe .

The parallel species to Picea obovata in North America are Picea glauca and Picea mariana , which also form a broad forest belt in the boreal zone.

The Rocky Mountains are home to some continental species, such as Picea engelmannii and Picea chihuahuana , which extend as far as Mexico . There are only two oceanic species in North America ( Picea breweriana and Picea rubens ).

Picea species are generally undemanding in terms of nutrient supply. The oceanic species, however, need moist and well-aerated soils . Waterlogging of Picea TYPES not tolerated.

In 2008, root wood was found under a spruce in the province of Dalarna in Sweden , which was dated to an age of 9,550 years and is said to be genetically identical to the tree growing above it.

Spruce is one of the most important forest species in the northern hemisphere. Natural forests are only used in remnants, mostly cultivated or artificially created pure stands. In Central Europe, the common spruce is the bread tree of forestry. As with the other species, the decisive factors are the straight growth, the rapid growth, the low demands on the location and the good usability of the wood. However, the spruce prefers cool locations, such as B. the mountain regions. As a result, the stocks in the Central Plateau will decline with the presumably increasing global warming and will have to be replaced by other tree species in the future.

The range of applications includes, above all, its use in paper and pulp production , as construction and furniture wood for indoor use and as firewood . As sawn timber, spruce wood is usually traded and used together with fir wood as a mixed range of spruce / fir. Spruce wood is processed in the form of round wood , sawn timber such as boards and glued laminated timber and as veneer wood . At the same time, it is the most important wood for the production of wood-based materials such as plywood , glued wood , chipboard and fiberboard . As a special application, evenly grown trunks from the high mountains are used as tonewood especially for the soundboard of keyboard instruments or as a soundboard for plucked and stringed instruments .

The spruce forests have some important protective function in many high mountains and steep slopes, as they protect the populated valleys from avalanches and rockfalls as protective forests . Some species are also planted as ornamental trees in parks and gardens or used as Christmas trees.

The word picea was used by the Romans in the sense of "resinous wood: spruce" (Virgil, Aeneis 6,180), but also when referring to the common pine ( Pliny the Elder , Historia naturalis 16,40ff.). It is a noun of the adjective piceus = "pitch, resinous", which belongs to pix , genitive picis , "pitch, resin". This is attributed to the Indo-European root * pik- "Pech, Harz". The root * pit- "spruce" is close to this root .

Both roots are mostly associated with the Indo-European words for "fat, juice, drink". However, a connection with * (s) spade-, * (s) pit- "pointed, piercing" is also conceivable. 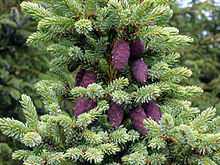 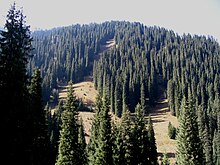 Both fossil and molecular biological data indicate that the genus Picea originated in North America. The oldest fossils (pollen) come from the Palaeocene Montanas (USA). Many cone fossils are known from the Eocene , but only from North America. The earliest fossils in Asia date from the Oligocene and Europe from the Pliocene . Via the Bering route, the genus might have reached Asia in one or two waves and from there on to Europe. The origin of the genus is likely to be in the late Cretaceous or early Tertiary.

The genus Picea alone forms the subfamily Piceoideae. The monophyly of the genus has never been questioned. The closest relatives within the family are the genera Cathaya and Pinus .

The system within the genus is classically established primarily on the basis of cone features, secondarily on needle features. A widely recognized system comes from Schmidt 1989, which is based on the system in the version by Schmidt 2004. Farjon 1990 also follows this classification, although he puts the taxa below the genus one level lower. Work (Ran et al. 2006) on a molecular biological basis justifiably cast doubt on this systematics developed on a morphological basis. However, there are still no new proposals for a phylogenetic system.