The title of this article is ambiguous. Further meanings are listed under Anatomy (disambiguation) .

The anatomy (the gain in knowledge serving, dissection 'of animal and human bodies, from ancient Greek ἀνά ana "on" and τομή tomé "cutting, the cut") is a section in the morphology and in the medicine and human biology (Anthropotomie) Zoology ( Zootomy ) and botany ( phytotomy ) the study of the inner structure of organisms . 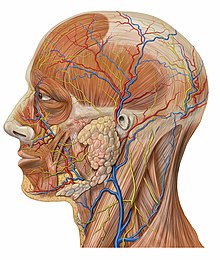 The shape, position and structure of body parts, organs , tissues or cells are examined. The pathological anatomy deals with diseased body parts. The microscopic anatomy concerned with the finer biological structures up to the molecular level and is linked to the molecular biology of. Classical anatomy uses standardized nomenclature based on the Latin and Greek languages .

The term anatomy has been used in a more general and transposed way since the early 16th century (also as anatomy ) in the meaning of "dissection, structure determination, analysis of concrete and abstract things", also "structure, (construction) structure", e.g. B. Anatomy of the soil, art, thought, society . 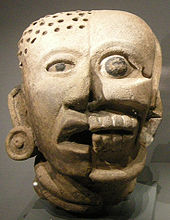 The earliest surviving anatomical studies are found in the Edwin Smith Papyrus , which dates back to around 1550 BC. Is dated. Are treated u. a. the heart and coronary arteries, liver, spleen and kidneys, hypothalamus , uterus and bladder, and blood vessels.

The Ebers papyrus from the last quarter of the 16th century BC Chr. Contains a treatise on the heart, in which the blood vessels are also described.

Nomenclature, methodology and applications go back to the ancient Greek doctors . Descriptions of muscles and skeleton can be found in the Corpus Hippocraticum (especially about the broken bones and about the joints ), whereby human physiology was more important than anatomy in Hippocratic medicine . Aristotle described the anatomy of vertebrates based on the dissection of animals. Praxagoras of Kos already knew in the 4th century BC The difference between arteries and veins.

The beginnings of a systematic anatomy originated in ancient Babylon. The first anatomical school existed in the 2nd century BC. In Alexandria. Ptolemy I and Ptolemy II allowed the body to be opened for anatomical studies, mostly on those who had been executed. Herophilos of Chalcedon carried out the first scientific autopsies and also vivisections on humans and animals. He is said to have dissected 600 live prisoners and is considered the "father of anatomy". He rejected Aristotle's view that the heart is the seat of the intellect and called it the brain. Other anatomists in Alexandria were Erasistratos and Eudemos of Alexandria . 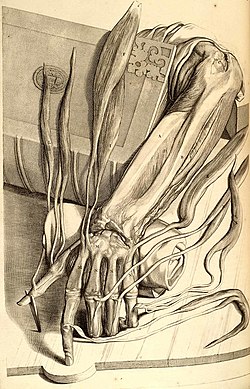 In the 2nd century AD, Galen of Pergamon systematically summarized the medical knowledge of the ancient doctors. As a doctor of gladiators, he was able to study the most varied types of wounds and thus also the anatomy of humans. He conducted further studies with pigs and monkeys. His writings formed the basis for the works of the Middle Ages, including the canon of medicine in Avicenna .

Since around 1300, anatomical teaching sections were occasionally carried out, especially in northern Italy. The main purpose of such demonstrations, however, was to confirm the teachings of the ancient authors or authorities. 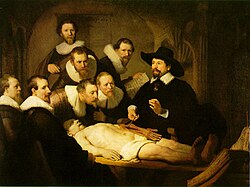 Rembrandt's "The Anatomy of Dr. Tulip "

From the 15th century on, anatomy received new impulses, inspired by ideas from humanism and the Renaissance. After anatomy had not made great progress in the Middle Ages, the Flemish anatomist Andreas Vesalius (1514–1564) corrected the assumptions or beliefs that had hardly been questioned for centuries, which outraged many of his colleagues. His work made him the founder of modern anatomy. Based on Northern Italian models, anatomical instruction by dissecting human corpses became popular in German-speaking countries in the 16th century. For example, from 1530 at the latest in Germany, from 1535 by Burghard Mithobius (1501–1564) at the University of Marburg .

William Harvey is considered to be the discoverer of the blood circulation in the West and a pioneer of modern physiology .

Since then, anatomy has had a high priority in the fine arts, sections on humans and animals were part of the basic training of the students. Artists such as Michelangelo , Raffael , Dürer and Leonardo da Vinci (1452–1519) spent years studying the human body. Da Vinci's Codex Windsor surpassed the work of Vesalius, born 62 years later, in its scientific accuracy. The close collaboration between artists and anatomists resulted in medical writings of exceptionally high quality, such as the textbook by Flemish Philip Verheyen (1648–1710).

In the Age of Enlightenment , anatomical theaters were built , which, in addition to their scientific value, had a high show value.

The first ever popular photographic anatomy atlas was published by Johannes W. Rohen and Chihiro Yokochi in 1982/83.

Illustration of the human skeleton by Gerard de Lairesse in Govard Bidloo's Ontleding des Menschlyken lichaams from 1685. The vanitas symbols, coffin and hourglass justify the subject.

According to the nature of the approach, the macroscopic anatomy is divided:

Microscopic section of the cerebellum of a chicken

Microscopic anatomy ( histology ) is responsible for examining anatomical structures below the area that is visible to the naked eye . It describes the fine structure of organs, tissues and cells.

Embryology describes the formation of anatomical structures during embryonic development. A wide variety of topographical and functional relationships can be identified based on the history of its origins. Embryological knowledge is also indispensable for understanding the origin of malformations . 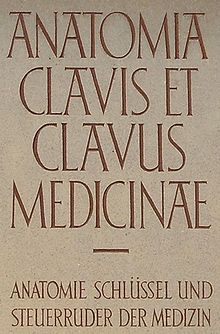 Blackboard at the anatomy lecture hall in Leipzig

The Viennese anatomy professor Josef Hyrtl wrote about anatomy in the second half of the 19th century: “[She] destroys a completed building with her hands in order to re-create it in her mind and, as it were, to recreate man. The human mind cannot set itself a more glorious task. Anatomy is one of the most attractive, and at the same time most thorough and perfect natural sciences, and has become one in a short time, as its era only spans a couple of centuries. "