Nerves is a redirect to this article. For the film see nerves (film) .

Cross section of a peripheral nerve 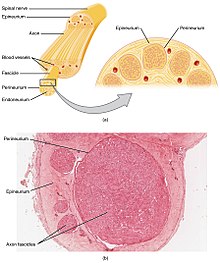 Cross section of a peripheral nerve, schematic representation and naming of the morphological structures 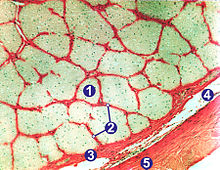 In the case of non-peripheral nerves, such as the optic nerve , the outer covering is formed from the meninges . Here the dura mater forms the epineurium ; The arachnoid and pia as well as the subarachnoid space also surround the optic nerve and form the peri- and endoneurium .

Afferents (towards the central nervous system) and efferents (from the CNS to the periphery) are distinguished according to the direction of the conduction of excitation . The afferents conduct sensitive or sensory information, so they are used to perceive internal and external stimuli. The efferents conduct motor or secretory impulses. According to the target area, the afferent and efferent nerves are further divided into somatic (nerves of the body wall; from ancient Greek σῶμα sṓma , German ` ` body '' ) and visceral (nerves of the intestines ; from Latin visceralis , ` ` concerning the intestines '' ). Most nerves are mixed nerves , that is, contain both afferent and efferent processes.

On the way to their target area ( innervation area), the nerves keep branching out. The smaller nerve branches are called Rami (Sg. Ramus ).