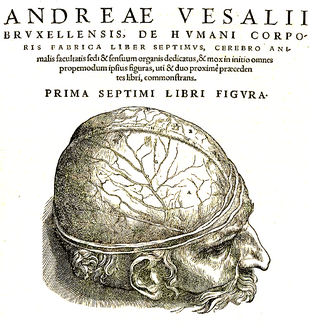 The vascular dura mater in a picture by Andreas Vesalius (1543)

As meninges , fachsprachlich meninges - shortened plural of Meninx encephali (about ancient Greek μῆνιγξ Meninx , German , skin ' ; ἐγκέφαλος enképhalos , German , brain' , belonging to the brain ') - refers to the connective tissue that inside the skull ( intracranial ) the Surrounding brain . They were first discovered by Herophilos of Chalcedon around 300 BC. Chr. Described.

Scheme of the meninges (proportions not shown proportionally!)

The dura mater (often just called " dura ") is the outermost meninges. It consists of two leaves, the outer leaf being identical to the periosteum , at least in the area of ​​the skull bone . The two leaves separate from one another at specific points to form so-called "sinuses" , a special form of venous blood conduit. The inner sheet of the dura mater extends into the large gap between the two cerebral hemispheres and into the gap between the two cerebellar hemispheres and forms the falx cerebri , the falx cerebelli and the tentorium cerebelli by juxtaposing with the inner dural sheet of the adjacent brain part . The falx cerebri separates the two halves of the cerebrum in the sagittal plane and merges into the falx cerebelli , which separates the two halves of the cerebellum. The tentorium cerebelli (tented roof of the cerebellum), which separates the cerebrum and cerebellum, is formed accordingly . It is a more horizontal structure in the skull that has a complex three-dimensional shape due to its attachment points to different parts of the bony skull. The sellae diaphragm is formed analogously . The pituitary gland lies beneath it and is therefore positioned extradurally (outside the dura).

In the area of ​​the spinal cord , the dura mater is not connected to the spinal canal . There are only a few bony points of attachment of the dura mater spinalis : on the one hand the beginning at the edge of the foramen magnum of the occiput , on the other hand the end of the dural tube at the level of the 1st / 2nd Cross vertebra . The filum terminale , which begins as a continuation of the medullary cone ( Conus medullaris ), continues from here as the filum terminale externum or durale and ends at the second coccyx vertebra , where it is also bony fixed and is in continuity with the sacrococcygea anterior ligament .

In the spinal canal there is a space between the dura and the vertebral canal, the epidural or peridural space, which is filled with fatty tissue . The emerging nerve roots can be anesthetized via an injection into this space ( epidural anesthesia ) .

The dura mater is predominantly tight, collagen-fibrous connective tissue and primarily has the function of an organ capsule .

The arachnoid (or "cobweb skin" called) is the middle meninges. It rests on the inside of the dura mater and is separated from it by a usually closed, partially fluid-filled capillary area, the subdural gap (subdural space), which is only widened by excessive pathological fluid or air accumulation and becomes recognizable as a subdural space . This can occur when the bridging veins (Vv. Superiores cerebri), which open into the sinus sagittalis superior and thus break through the dura mater overlying the arachnoid, tear and consequently bleed into the subdural space. Bleeding into the subdural gap is called a subdural hematoma (SDH).

The arachnoid, like the dura mater, skips the furrows of the brain and gets its name from the strong whitish markings with fine fibers of collagenous connective tissue, which give it a cobweb-like appearance. Button-shaped bulges protrude from the arachnoid into the venous blood conductors in the dura mater ( sinus durae matris ). These protuberances are called arachnoid villi ( Pacchioni granulations , Granulationes arachnoideae ) and are a site of CSF absorption.

Under the arachnoid there is the subarachnoid space ( Spatium subarachnoideum ), which is filled with liquor cerebrospinalis and thus represents the outer liquor space. In this space between the arachnoid and pia mater are numerous superficial arteries and veins of the brain.

The pia mater (delicate meninges) is the innermost layer. It rests directly on the brain and spinal cord, covers them completely and also extends into all furrows. It consists of soft, delicate connective tissue and is fused with the surface of the brain and therefore cannot be lifted off with tweezers.

Functions in waste disposal of the brain

In addition to its protective functions for the brain, the system of the meninges also forms the start and end of the micro-cycle of the brain for waste disposal, the glymphatic system discovered in 2012 .

The arteries of the CNS have from their entry around by the meninges around its outer wall an additional, very narrow vascular space, a so-called perivascular space ( Spatium perivascular ) of the blood vessels in the CNS, the term Virchow-Robin space bears. A small part of the cerebrospinal fluid from the subarachnoid space reaches all areas of the CNS through this space in a constant current - driven by the wave movements of the arterial walls triggered by the pulse beat .

There it is distributed with the help of the glia (supporting cells) and at the end - with the removal of waste materials - it flows off again, presumably partly directly into the dura mater , namely into the collection vessels of the lymphatic system , the normal disposal system , which were only discovered there in 2015 the rest of the body. They are transported out of the brain through the perivascular space around the outer walls of the veins . The extent to which it is fed into the lymphatic vessels of the dura mater or the more distant lymphatic tracts on the neck has not yet been clarified (as of 2017).

A feared disease is meningitis, meningitis , which can be caused by viruses or bacteria, such as meningococci , in the event of an infectious disease. The feared consequences of this disease are damage to the brain, which can lead to intellectual disability or even death. If the inflammation affects the brain as well as the meninges, this is known as meningoencephalitis ; if the arachnoid is mainly affected, it is called arachnoiditis . Irritation of the meninges can be seen in a neurological examination of meningism as well as Brudzinski , Kernig and Lasègue signs . Other non-specific symptoms of meningeal irritation syndrome are headache , sensitivity to light and noise , nausea, and vomiting. These symptoms can also occur with other conditions affecting the meninges, especially migraines or subarachnoid hemorrhage .

Meningioma is called a meningioma . Accidental or otherwise caused bleeding into the spaces between the meninges, known as subdural hematoma or subarachnoid hemorrhage .