The CNS fulfills various tasks in a more complex living being :

All more complex living beings that move as a whole require a system with these functions. To see it as a control system is obvious, but it is not correct. The CNS does not actually control it. As a result of its central position, in addition to internal - organismic self-regulation, it automatically contributes to maintaining the functionality of the entire organism in relation to organismically relevant conditions in its surroundings or environment ( Jakob Johann von Uexküll ).

The CNS always "mediates" in two directions: As a central organ of integration, coordination and regulation, it not only serves to process stimuli that reach the CNS via the sensory organs developed by the respective organism , but also from those which are produced in the organism itself. Animals are therefore not only stimulated to react by environmental conditions. You also become active on your own initiative. This can even happen while resting or sleeping, when self-produced stimuli reach greater intensity; in humans this is the case with more intense dreams . These are sometimes accompanied by a strong influence on the autonomous and vegetative areas of the organism, which are constantly regulated even during sleep, such as heartbeat or perspiration, the urge to urinate or bowel activity, so that stronger (co-) reactions of this kind act as wake-up stimuli and make a sleeper wake up "excited" can.

Organisms like humans that learn and consequently can practice, such internal stimuli through z. B. to produce visual or acoustic ideas of all kinds even in the waking state as daydreams or imaginations can stimulate organismic reactions in oneself that are not subject to the predominantly voluntary control such as that of the motor skills. This applies to all autonomous-vegetative body processes such as blood pressure and pulse regulation , erection of the limb , sweat and tear production as well as the regulation of the involuntary muscle tone . 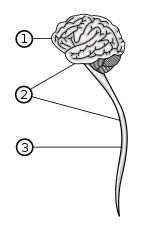 In the CNS, gray matter ( substantia grisea ) and white matter ( substantia alba ) are distinguished. The gray matter lies inside the spinal cord , surrounded by the white matter outside. In the brain the circumstances, however, are complex, in the cerebral cortex ( Cortex ) to gray matter is also outside, both in the cerebrum ( cerebral cortex ) and in the cerebellum ( Cortex cerebelli ). Both parts can already be recognized with the naked eye by means of the eponymous color of a cut. The gray matter consists mainly of nerve cell bodies , the white of their projections ( axons ), i.e. the conduction pathways. However, the white matter also contains collections of nerve cell bodies, the nuclei ("kernels" or "core areas"). The larger core areas are also easy to identify.

CNS of other animals

The dorsal , central nervous structures of vertebrates could be homologous to the ventral structures of the rope ladder nervous systems of insects . Such a hypothesis was formulated as early as 1875 by Felix Anton Dohrn , who suspected that both can be traced back to the neural network of a ringworm-like ancestor.