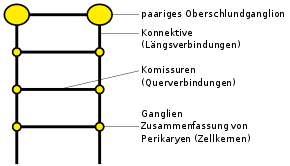 These nervous systems, which are usually ventrally located and are therefore also known as the abdominal marrow , are typical of several animal phyla of the primordial mouths (protostomia), in particular for the 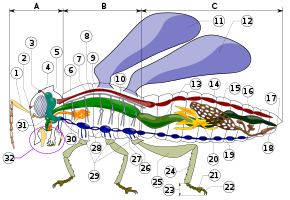 Rope ladder nervous system of an insect: in the area of ​​the thorax (chest) and abdomen (abdomen) the rope ladder nervous system runs ventrally (abdominal side) and is shown in dark blue. Thoracic ganglia are more pronounced, since the legs in nerve are ated (movement coordination and processing of information from often highly sensitive sense organs on the legs). In the head, above and below the pharynx, several ganglia are fused to form the upper and lower pharyngeal ganglion (blue-green). Here the upper throat ganglion develops a stately size, because it u. a. Eyes and antennae innvervated

Each segment of the body contains two ganglia or a fusion ganglion that has grown together from the two, which is used in particular to control the organs of this segment. In the head area, several ganglia are usually fused to form an upper pharyngeal ganglion (cerebral ganglion), which is also known as the brain in arthropods and tardigrade and performs higher-level functions.

Importance of the rope ladder nervous system for taxonomy

The evolutionary origin of the rope ladder nervous system is not yet fully understood. The nervous system of the molluscs can perhaps - as the partially developed abdominal marrow of the beetle snails show - be traced back to a rope ladder nervous system in evolutionary terms and would then have originated from the common parent species of the Lophotrochozoa (molluscs, annelids, etc.) and the Ecdysozoa (arthropods, roundworms, etc.). For some members of these groups, it would then have to be replaced by another form of the nervous system or it would have been lost. If it is however, in the nervous system of the molluscs an regardless Resulting nervous system would be the ventral nerve cord, the summary of the classical taxon of arthropods support (Articulata) with the annelids, tardigrades, Stummelfüßern and arthropods. For this reason it was considered one of the most important arguments for the proponents of the “articulated animal theory”.