Mollusks and mollusks are redirects to this article. For the so-called dellar warts, see Molluscum contagiosum .

The molluscs (Mollusca) or mollusks ( Latin molluscus "soft") are a very species and shape-rich animal strain of the tissue animals (Eumetazoa). They mainly live in the sea (marine), but with some forms they also occur on the mainland and in fresh water. The science of the molluscs is also known as malacology ( ancient Greek μαλακός malakós "soft") or malacozoology.

Schematic representation of a generalized mollusk

The body of the mollusc is originally unsegmented, has a strictly bilateral (bilateral) structure and is divided into four regions:

In most groups of molluscs, the foot is designed as a crawling or grave and sticking organ, whereby the creeping and sticking function is considered to be the original. In many species, the outer cell layer of the mantle, the mantle epithelium, deposits an exoskeleton made of calcium carbonate to better protect the visceral sac . This exoskeleton occurs in different forms: It can consist of an episphere, i.e. H. consist of a chitinous layer (cuticula), in which numerous individual, small calcified needles ( spicula ) are embedded, form a kind of flat armor or an elongated or spiral wound housing into which the animal can withdraw completely. The flat or shell- like exoskeletons are widespread among the molluscs and are also known as the shell . Calcified spheres are considered to be an original ("primitive") feature and are only found in worm mollusks (Aplacophora) and beetle snails (Polyplacophora), the latter also developing flat structures. The epithelium of the head foot often bears eyelashes ( cilia ) and numerous glands that secrete various secretions.

The mollusks' excretion system is considered unique. The ultrafiltration of the primary urine from the hemolymph , a type of primitive blood, takes place via the walls of the antria (atria, auricle) into the pericardium (pericardium), the celomial space that surrounds the heart. The areas of the pericardial epithelium lying on the atria and lined with podocytes are also called "pericardial glands" for historical reasons. The filtration is made possible by the "blood pressure" generated by the heart muscle. The primary urine (pericardial fluid) then passes through the pericardioducts (also called nephridia, metanephridia, or nephridial canals, one per half of the body), ciliate ducts that are connected to the pericardium at one end and the mantle cavity at the other end. In "higher" mollusks, the pericardial products are relatively complex in sections, and these sections are then called "kidneys". The reabsorption of water and vital substances contained in the primary urine takes place in the pericardial products. This is how the secondary urine is created. This is released into the mantle cavity. The structure of the excretion system of the mollusks is relatively similar to that of the vertebrates. The pericardial glands and pericardium function analogously to the glomeruli and Bowman's capsules of the kidney corpuscles and the pericardial products analogously to the renal tubules of the vertebrate kidney .

While some groups of the "higher" mollusks (Eumollusca, Testaria) have a comparatively conservative physique, which comes relatively close to the assumed original plan (see below ) with crawler foot, radula, simple exoskeleton with a purely protective function, strict bilateral symmetry and anus at the rear end of the body ( Single shells, beetle snails - although these representatives have developed a pseudo-segmentation with, among other things, the multiplication of the ctenidia or a multi-plate shell), this blueprint has been modified even more in other groups. In cephalopods , for example, the original body axes are rotated by 90 °, so that the original dorsal side forms the rear end of the body and the original rear end with anus and mantle cavity lies ventrally close to the head. Correspondingly, the head foot forms the front end, with a tentacle or arm ring arranged around the mouth opening, while the housing not only offers protection, but also functions as part of a hydrostatic apparatus for regulating the static buoyancy . With the modern cephalopods (Coleoidea) the buoyancy body is shifted into the body or very strongly reduced. The mussels (bivalvia) are also very heavily modified, in which the head and radula are reduced, the foot is transformed into a grave organ and the shell is two-lobed. In the case of the snails, the bilateral symmetry was partially reduced, accompanied by a 180 ° rotation of the viscera. Therefore, in snails, the mantle cavity and anus point towards the head.

The digestive system of molluscs differs considerably according to their physiological needs. Particularly stable biopolymers are often found on the structures that grasp and chop up the food ( radula or parrot-beak-like jaws of cephalopods ) in the form of chitin . Some herbivorous molluscs also use in their digestive system endogenous cellulases for degradation of cellulose which has been demonstrated in some snails such as the snail and some shells : Corbicula japonica and Lyrodus pedicellatus . The origin of the cellulase gene is traced back to the last common ancestor of the Bilateria .

Sensory cells occur, among other things, in the form of tactile, smell, taste and light sensory cells.

While simple light sensory cells occur in most groups, cephalopods , snails and some mussels have formed real eyes . The sense organs are particularly innervated by the cerebral ganglion . They reach their highest level of organization in the eyes of the cephalopods, which can be compared in their performance and structure with the eyes of vertebrates , but develop differently.

Snails : Snails originally creep forward. Typical land snails pull the rear end of their foot forward at regular, small intervals and then put it back on, creating wavy lines on the underside of the foot.

Mussels , such as mussels , produce mussel silk ( byssus ) to attach, often only in the juvenile stage. Fine linen is the silk of the insect in its construction homologous , it contains silk proteins fibroin and sericin .

Many representatives of different classes of shell molluscs , including some cephalopods (such as pearl boats ), form shells , the innermost layer of which, the hypostracum, consists essentially of mother-of-pearl , a biological composite of calcium carbonate and, among other things, fibroin-like proteins.

The facilities for the production of silk proteins are to be found in the common ancestors of molluscs and arthropods. In the course of further evolution , a variety of uses, many different secretion organs and diverse molecular structures of the respective "silks" emerged, which have not yet been fully understood.

Most mussels, all cephalopods, and many snails are segregated. However, hermaphroditism is common or even the norm in some groups, v. a. in the lung snails. The fertilization originally takes place in the open water, into which the eggs and sperm are released; internal fertilization has developed in many derived groups of molluscs, e.g. B. in all snails living on the mainland.

The development of the molluscs usually takes place through a spiral furrow. In the further course, a larval stage initially develops. This can be a bell-shaped larva , a Präveliger or Veliger , which externally resemble a Trochophora larva. The yolk-rich eggs of the cephalopods have a discoid furrow and show a direct development. In some groups, especially in freshwater and on land lung snails, the development is also direct and without a free-living larval stage.

Some species do brood care: species of the monoplacophora keep the embryos in their mantle cavity until they hatch, similar to what the pea clams (Pisidiidae) do in fresh water. Octopuses of the genus Octopus guard their nest and isolated tropical freshwater snails also show forms of brood care.

Distribution and number of species

With the exception of the polar regions and the high mountains, mollusks live in all habitats on earth. Most mollusks, however, live in the sea, almost all groups are exclusively marine (cephalopods, scabbards, monkeys, worm mollusks, beetle snails). The mussels can also be found in fresh water and sometimes even in moist soil, such as the pea mussels ( Pisidium spec.). All other habitats are populated by the largest group of molluscs, the snails .

The total number of species is given very differently, from sometimes well over 100,000 species to sometimes only 50–60,000 species. The main reasons for the various information are unclear species delimitations and in particular the lack of a general overview of the species diversity of the various subgroups.

Due to their calcium carbonate exoskeletons, which are easily preserved for fossils, mollusks generally have a very dense fossil record. The oldest fossils, which are certain to have come from molluscs, are found in the small shelly fauna of the Lower Cambrian, but the animal phylum is most likely formed as early as the late Precambrian . The Kimberella, known from the Ediacara fauna, is considered to be a possible main group representative of the molluscs. There is still some uncertainty about the common basic plan of the mollusc groups living today (mollusc crown group ). Some suspect that the youngest common ancestor of the crown group was a small worm-like species, barely half a centimeter long, with a stretched intestinal tract (anus at the rear end of the body) and relatively strict bilateral symmetry, which had no closed shell, but an episphere and a foot with a ciliated sliding sole like some modern worms. Others, based on the fossil record and observations on recent species, assume that worm mollusks did not emerge from the most primitive forms, but rather from beetle snail-like ancestors. This calls into question the reconstruction of the ancestral species of today's molluscs as an organism similar to worms.

The evolution of the mollusc classes and their phylogenetic relationship to one another is not yet fully understood.

Together with other animal phyla , the molluscs are now part of the large group of Lophotrochozoa . Within this group, the cupworms (Entoprocta, also called Kamptozoa) are currently considered to be the closest related. The assumption that the molluscs were directly related to the annelid worms (Annelida) is rarely discussed any more.

The radula (rasp tongue) is a central and systematically significant characteristic of the mollusc tribe in terms of autapomorphy (common derived characteristic ). The other central morphological features in the original blueprint of the molluscs are the threefold structure of the body into head, foot and viscera, the formation of a mantle with a mantle groove, the reduction of the coelom to the pericardial system and the formation of an (originally always) open blood vessel system with a ventricle and one to more arteries. In addition, the shell in particular is an important feature of almost all molluscs, although the primarily one-piece shell with the typical three-layer structure only occurs in the shelled molluscs (Conchifera). 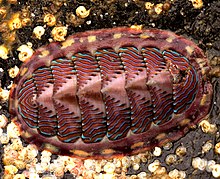 Eight living and several extinct classes are counted to the tribe of the molluscs. The following three classes do not have a typical mollusc shell. They are known as spiny molluscs (Aculifera). Molecular biological studies suggest that this group did indeed emerge from common ancestors.

The following five classes are also grouped together as shell molluscs (Conchifera) and probably form a monophyletic unit. They are characterized by the characteristic mollusc shell .

In addition there are some extinct classes, their assignment to the molluscs is partly controversial; The following are often mentioned in this context:

The phylogenetic relationships of the above groups are currently still in flux. In total, around half a dozen different family trees ( cladograms ) are currently being discussed for the classes that are still alive, each of which is supported by various findings. The following is a cladogram based on a study published in Scientific Reports in 2020 .