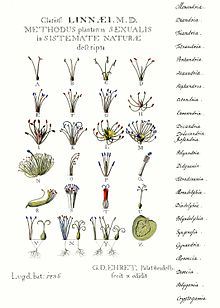 The systematics (from ancient Greek συστηματικός systēmatikós , 'ordered') of living things is a field of biology . It is also called biosystematics .

The classical system mainly deals with the creation of a systematic classification (a system, taxonomy ) as well as the naming ( nomenclature ) and the identification ( determination ) of living beings. The modern system of living beings (Stuessy 1990) is based on the reconstruction of the tribal history of living beings ( phylogeny ) and research into the processes that lead to the diversity of organisms ( evolutionary biology ), and is therefore also referred to as natural systematics.

Ernst Mayr bases his system on the biological species concept. When classifying the organisms, both the extent of divergence and the order of branching are taken into account.

Example: crocodiles and birds have a younger common ancestor than the birds with the rest of the reptiles . The acquisition of the bird's flight is to be regarded as a significant innovation that led to adaptive radiation . Therefore the crocodiles (Crocodylia) are an order in the class Reptilia. The class Reptilia is compared to the class of birds (Aves), which results in paraphyletic taxa.

In the numerical taxonomy is omitted phylogenetic assumptions. The classification of the species in the system occurs only on the basis of measurable differences and similarities in anatomical features. Original and derived features are not distinguished from one another.

The numerical taxonomy has largely been replaced by cladistics . Even so, some biologists continue to use phenetic methods such as neighbor joining algorithms to obtain a sufficient phylogenetic approximation when the cladistic methods are too computationally expensive.

According to Willi Hennig , the taxa are only formed by species that form a closed community of descent , a monophylum. The smallest unit of the phylogenetic systematics is the taxon species. The monophylum is the unit of organismic nature located above the species level, which consists of all descendants of a (parent) species and the parent species itself. The typological and biological concept of the species is rejected as inadequate.

The phylogenetic species concept takes the place of the typological species concept. This concept summarizes species that are characterized by synapomorphies and that are differentiated from species with autapomorphies . An autapomorphy is an evolutionary novelty of a taxon that differentiates this taxa from other taxa and thus establishes its evolutionary uniqueness. A synapomorphy represents a characteristic which is only common to the species that emerged directly from the parent species. A feature occurring in two taxa that evolved in an earlier stem species of the common stem line and can also be found in other taxa in an outgroup comparison is called plesiomorphism. A species ceases to exist when it changes into two new species through speciation (species formation). The natural system is a dichotomous cladogram (for details see cladistics ). 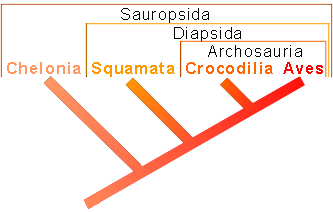 Taxonomy based on DNA base sequences

In future, the differences between the individual species will be systematically worked out for all known species based on comparisons of their DNA base sequences (see DNA barcoding ). It is hoped that this will give a better understanding of evolution .

The classic evolutionary classification using the example of humans

Below is the classification of man as a detailed example. The fine divisions are grouped to clarify the rough division realm> tribe> class> order> family> genus .

The same fine division is not required for all species. In mammals z. B. the trunk is not used. (→  Systematics of multicellular animals .)

Taxonomy and systematics in research and science

Taxonomy and systematics are fields of classical, organismic biology. At German universities, the proportion of taxonomic training in the biology course is falling, and with it the proportion of systematically experienced biologists and ecologists. The importance of good taxonomic processing in collections and in the field became clear when the CBD Biodiversity Convention was implemented : In order to protect species, populations and habitats, the actors must be able to reliably identify the animal and plant species.

Aristotle arranged the living beings known to him in a scale ( Scala Naturae ) according to the degree of their "perfection", that is, from primitive to more highly developed. He introduced names for individual groups that are still used today ( Coleoptera , Diptera ). In ancient times , for example, the habit ( herb , shrub , shrub , tree ) or way of life ( farm animal , wild animal , aquatic animal ) was used as a classification criterion.

Carl von Linné used a binary nomenclature to name the species in his works Species Plantarum (from 1753) and Systema Naturae (from 1758) . The main purpose of this nomenclature is the unambiguous naming of the species regardless of their description.

Linnaeus used the flower structure to classify the plants . He divided the plants into 24 classes - principally according to the number and shape of the stamens (stamina) . Linné's system corresponded to the requirements of his time, in which immense new spaces of experience were opened up to naturalists. Voyages of discovery and trade confronted European biologists with a huge number of new species that wanted to be described and classified. Linné's system was no longer used after 1850 because it was not a natural system. With the appearance of Darwin's Origin of Species , Linnaeus' sexual system became completely obsolete, since from now on one wanted to organize living things according to their phylogenetic position (a natural system). Linné's classification of the lower taxonomic ranks ( species , genus ) is often still valid today. This is due to the fact that Linné's criterion of flower structure is closely related to the process of speciation (in flowering plants) - changes in flower morphology, the pollination mechanism etc. often lead directly to new species.

It is completely different with his system for animals . The basic concept is the typological definition of the species, that is, the reduction of the abundance of features to a few key features and the abstraction of the possible variations within a species to a type (“idealistic morphology ”). Its grouping reflected a natural system for the lower taxa such as species and genus. But Linnaeus had already recognized that his classification for higher taxa remained an artificial system due to the quite arbitrary criteria. Because in all of this Linnaeus assumed the immutability of the species and did not intend to create a phylogenetic system. Only later did this provide a justification and standard for the naturalness of the system.

Since the emergence of the theory of evolution , efforts have been made to convert this partially artificial system into a natural system that better reflects the relationships of descent ( phylogenetics ). The homologation of organs initially played a major role. The structure of proteins has been studied since the 1970s in order to derive indications of the degree of relationship. For this purpose, not only morphological and anatomical, but also biochemical ( chemosystematics ), physiological , cytological and ethological characteristics are used. Above all, genetic similarity is used to determine family relationships directly on the genetic make-up .

The role of systematics in understanding the history of organisms is already described by Charles Darwin in his book On the Origin of Species : “If we start from this idea that the natural system, as far as it can be carried out, is genealogically arranged ... then we understand the rules that we have to follow when classifying. "