While Charles Darwin did evolution, i. H. the fact that the organisms that were grouped together to form variable populations became different in the course of numerous generations, still regarded as a hypothesis, was already a fact for Wallace, who was 14 years his junior. Since August Weismann (1834–1914), no competent biologist has doubted the fact of biological (organismic) evolution , although evolution processes on both a micro and macro scale represent real historical natural processes. Some of the basic principles can be checked experimentally and analytically, and many times they can be reconstructed using age-dated fossil sequences (reasonably correct, never complete).

Biologists used to speak of "the theory of evolution "; Since the establishment of modern evolutionary biology, however, it has become clear that there is no uniform “general theory” that explains all aspects of evolution, but that different approaches and branches of research have to work together to develop the scientific building blocks for the complex individual processes. Evolutionary biology is thus a multi-faceted system of theory that integrates concepts, findings and methods from paleontology to molecular biology. Chemical evolution deals with the problem of the beginning of life on earth .

Biological evolution can to a large extent be seen as a "system property of populations", since with each offspring new variability arises, with the genetically determined information being passed on by those individuals who reproduce most successfully. A good adaptation to the respective environmental conditions in the broadest sense is often a prerequisite, but there are also considerable random components in differential gene transmission, especially in the case of small population sizes. In the analysis and discussion, a distinction is often made between the genotypes (the “hereditary picture”) of an organism and the phenotypes (the “appearance”) of an organism. For many questions, including z. B. for the effects of evolutionary processes on medical findings (in the context of evolutionary medicine ), the genomic system, its dynamics and evolution itself are examined.

Evolutionary biological analysis methods thus encompass a wide range of scientific process technologies. In individual cases, this can include physical age dating, chemical analyzes of organic residues in the rocks, cell, developmental and molecular biological studies to understand the origins of the various animal and plant shapes, DNA sequence analyzes and family tree reconstructions to identify the relationships and branches of various species Tribal lines from each other (e.g. human and chimpanzee line) or geological-tectonic and palaeoclimatological investigations to reconstruct earlier environments of the organisms of that time. 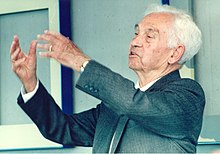 Modern evolutionary biology is an integrative scientific discipline that developed from 1940 to 1950 through the work of the British zoologist Julian Huxley (1887-1975), the Russian-American entomologist and geneticist Theodosius Dobzhansky (1900-1975) and the German-American Zoologist and systematist Ernst Mayr (1904–2005) developed it. In 1946, the Society for the Study of Evolution was founded in the USA , with E. Mayr serving as the founding editor of the journal Evolution published by the society . In Europe, a "European Society for Evolutionary Biology" (ESEB) was founded in 1987 by the American evolutionary biologist Stephen C. Stearns, who was then teaching in Basel . The strong delay in modern evolutionary research on continental Europe was probably caused by the events of World War II and its aftermath.

The origin of scientific evolutionary biology can be seen in the main work of Jean-Baptiste de Lamarck (1744–1829), who in his book Philosophy Zoologique (1809) had shown for the first time that organisms are not constant creations, but have developed from archetypes (concept the species transformation). However, since it was not written easily readable, the book was not very popular and today it is often only associated with so-called Lamarckism , although this was only a partial aspect of the work and also later researchers of the 19th century, namely Charles Darwin, in principle Supporters of the corresponding theory were, however, expanded it to include other central components.

With the theory presented in 1858 by Charles Darwin (1809–1882) and Alfred Russel Wallace (1823–1913) (main works: On the Origin of Species , 1859; Darwinism , 1889), mechanisms for species transformation could be identified for the first time, by Darwin as “Deszendenz mit Modifikation “Designated, formulated. The principle of evolution through variation and natural selection were central. Later (1871) he also integrated special aspects such as sexual selection .

The classical theory of descent or descent theory was extended by August Weismann and Alfred Russel Wallace to a “Neo-Darwinian theory”, which assumed bisexual reproduction (sexual reproduction) as the main cause of biological variability in animals and plants, which made possible a new combination of genetic makeup and saw directed natural selection as the central driving force behind species change. With the development of the synthetic theory of biological evolution by Dobzhansky, Mayr, Huxley and other biologists, it was possible to combine population genetic studies with findings from palaeontology, comparative anatomy and biogeography (1937 to around 1950). This theory, based on six main theses, was expanded from the year 2000 to the "expanded synthetic theory of biological evolution (expanded synthesis)", whereby the theory of symbiogenesis developed by Konstantin Mereschkowski was also integrated. The modern molecular phylogenetically oriented evolutionary biology emerged as an independent branch of the biosciences from the "Extended Synthetic Theory" and is today as a general discipline of theoretical and practical importance ( agriculture , medicine , etc.) that unites all biological sub-areas . It now even makes it possible to reconstruct the development of genomes, for example the incorporation of parasitic DNA in the form of transposons into the genome of higher organisms in the course of the earth's history, and to roughly date it using the principle of the molecular clock .

For individual aspects of evolution, without fundamentally questioning the principle of evolution, variously modified hypotheses and models were developed that had a strong following temporarily or regionally. So in the Stalinist-led Soviet Union at the time of the German-Soviet War until the early 1960s, a special theory of the transmission of acquired properties, Lysenkoism , based on Ivan Michurin (1855-1935) and Trofim Lysenko (1898-1976), was official State doctrine taught. Their doctrine was propagated in particular for increasing yields in agriculture and at the same time fought against the theory of evolution taught in the West.

For the formation of complex (primarily animal) living beings, sometimes special “vital factors” (as in Hans Driesch , 1867–1941) or the effect of “inwardness” (in Adolf Portmann , 1897–1982) were propagated. At the Senckenberg Research Institute , ideas were formulated in the 1960s / 70s that attempted to explain the transformation of animal forms in the history of the earth on the basis of a hydroskeleton theory and a heavily modified concept for evolutionary adaptation. The protagonists of this hypothesis founded by Wolfgang Gutmann (1935–1997) subsequently spoke of the “ Frankfurt theory of evolution ”, interpreted living beings mechanistically as “hydraulic constructions” and postulated hypothetical gallertoids as the starting point for all Gestalt developments.

Scientifically founded evolutionary biology, which has been developing steadily for around 200 years, is constantly being critically examined. Some criticism is religiously motivated. Sometimes alternative "explanations" for the evolutionary process are offered. Often the phenomenon of evolution is completely negated. In discussions one observes that concepts and terms are used differently than in science, or that the relevance and significance of scientific empiricism and experimental research are not critically assessed or interpreted differently. Often one also encounters (possibly unconscious) non-scientific ways of reasoning . Sometimes facts are also misunderstood or, due to an inherently different worldview, are received, interpreted and assessed differently, for example when the similarity of certain fossil finds (e.g. leaves) to some species today is seen as "evidence" of non-evolution.

Sometimes skepticism can also develop from a statement made by scientists that science cannot or cannot yet explain some evolutionary processes or that certain gaps in knowledge will always remain, for example due to incomplete fossil reports . As an alternative concept, the discussion partner often brings a divine act of creation into play, through which either the initial conditions (emergence of species) or the entire evolution (if such is allowed) would be specified and directed. Here, creation myths are also cited as an argumentative basis and interpreted as true (and not as the pictorial language of an earlier cultural area) and as suitable for explaining real processes.

On various occasions, “compromises” are presented from the religious side, for example by postulating a basic type model, in which, however, numerous scientific (including conceptual and terminological) misunderstandings and ambiguities are hidden. The intelligent design theories are based on “perfectly created living beings”, but disregard, among other things, the numerous “design errors” (genetic defects, aberrations etc.) of living organisms, which are side effects of (molecular) evolutionary processes. Another attempt is the Third Way of Evolution , which tries to offer explanations about evolutionary processes beyond creationism , but also from the findings of evolutionary biology.