This article covers the journal - for musicians see Chico Science .

Science ( English for natural , social and formal sciences ) is the professional journal of the American Association for the Advancement of Science (AAAS, English for American Society for the Advancement of Natural Sciences ) and, along with Nature, is considered the most important of its kind worldwide. The weekly published journal operates on a peer-reviewed basis and has approximately 130,000 subscribers . Since on the one hand there are many institutions such as universities and on the other hand the magazine has an online edition, the actual number of readers is estimated at around 1 million.

The focus of the magazine is on the publication of important scientific findings based on current studies. However, every issue also contains news and opinions on scientific topics. While most science magazines concentrate on one subject, Science claims, like its strongest competitor Nature , to cover the entire area of ​​the natural sciences. However, Science focuses on the life sciences , particularly the latest developments in genetics and biotechnology .

It is true that science by the American Association for the Advancement of Science issued but is to publish a membership not required. Less than ten percent of the articles submitted are published. They are all assessed beforehand ( peer review ).

The editorial office is based in Washington, DC ( USA ) and has an office in Cambridge ( UK ). 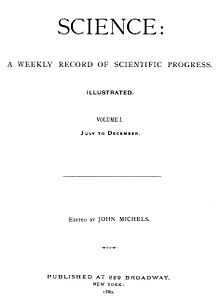 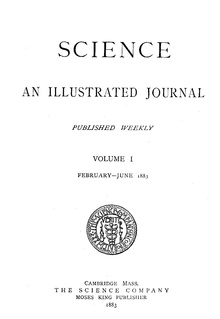 Science was originally founded in 1880 by journalist John Michels . Although it was financially supported by Thomas Alva Edison and later by Alexander Graham Bell , it was discontinued in 1882 due to a lack of sales.

The entomologist Samuel Scudder bought the magazine in 1883 and successfully reported on meetings of well-known American scientific societies, including the AAAS . However, he ran into financial problems in 1894 and the paper was sold to psychologist James McKeen Cattell for $ 500 .

Cattell was in 1900 through an agreement with the secretary of AAAS, Leland Howard , Science make the official announcement newspaper this association. At the same time he acquired the printing company "The Science Press" in New York, from January 1908 she took over the publishing of the science newspaper Science.

At the beginning of the 20th century, the magazine published significant findings from all research areas in the natural sciences, for example articles on the genetics of the fruit fly by Thomas Hunt Morgan , work on gravitation by Albert Einstein and reports on the study of spiral nebulae by Edwin Hubble .

After Cattell's death in 1944, Science became the property of AAAS, but in the following years it lacked a permanent editorial staff until Graham DuShane became the new editor-in-chief in 1956 . In 1962, the physicist Philip Hauge Abelson , the co-discoverer of Neptunium , took over this position and held it until 1984. Under Abelson, the efficiency of the peer review was improved and the publication methods were brought up to date. The most important publications of this time are reports on the Apollo program and the first studies on the immunodeficiency disease AIDS .

In 1985 the biochemist Daniel E. Koshland took over the editorial presidency and in 1995 handed it over to the neurologist Floyd Bloom . This in turn gave it to the biologist Donald Kennedy in 2000 .

From 1895 to 1946 the title had the addition NS (new series). Science appeared at times under the title Science magazine . Numerous supplements of various types were published with the magazine.

"The Scientific Monthly " was discontinued at the end of 1957 and the editorial team was taken over by Science.

In 2007 the magazine was awarded the Prince of Asturias Prize together with Nature .

Since 1996 they have been awarding a Breakthrough of the Year .

Science has been online since 1990 . The individual issues of Science have also been archived online there since mid-1996, but are not fully accessible. In principle, only members of the AAAS have access to the complete archive; Normal visitors can only see the table of contents of the current and past editions on the homepage. However, some full articles are also published.

The impact factor in 2019 was 41.845, the five-year impact factor 44.372. According to the statistics of the ISI Web of Knowledge , the journal with this impact factor was ranked second out of 63 journals in the category of multidisciplinary sciences after Nature .