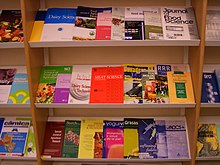 Trade magazines on a shelf

Scientific journals (Engl. Journals ) are regularly moved journals on specific topics from different scientific disciplines. Scientific journals are the most important medium for the publication of new methods and results from research and science. Articles in these journals usually go through a peer review process before publication . The reputation of academics is often judged by the number of specialist articles published and the reputation of the journals chosen.

The scientific journal is not aimed at the general public, but at experts. The circulation of the leading trade magazines is lower than that of the leading consumer magazines. Through their respective reputation in the specialist give periodical reviews (Journal rankings) insights, however, are important in the natural sciences and economics far more than in the humanities.

Your organization often consists of one initiated by the scientific community editorial board (Editorial Board) , the submitted articles by - ideally - independent review process by other scientists of the same subject area (scientific peer review Check) on their quality and, where appropriate corrections by the author lets the publisher publish. The authors, editors and reviewers are usually not remunerated, but only work to gain knowledge and for their personal reputation as scientists.

Participation as a reviewer in the review process is playing an increasingly important role in evaluating the performance of a scientist, as this is indicative of the importance of a scientist in his specialist community: If a scientist is credited with a high level of professional competence, he will be assessed by a specialist journal invited; if he is keen to further develop the discipline, he will usually accept this invitation. Recently, Publons in particular has established itself as a standard in several subjects, which enables such performance to be reliably measured and is now widely used in appointment procedures.

In return for the publication, the publisher acquires the exclusive commercial rights of use to the published content. In the meantime, however, this practice has come under fire in view of the often very high magazine prices, as the publishers are accused of making inappropriately economic profit from findings that are predominantly obtained from publicly funded researchers.

Usually one or more experts in the relevant field ( reviewers ) subject the articles submitted to a scientific journal to a qualitative review before they are printed. Quotas are often known as to how many articles they completely reject as a percentage. After the discovery of correctable defects, the author (or main author) is given the opportunity to revise the respective article or, in the event of technical doubts, to reply, whereby the names of the reviewers are usually not mentioned. In some subjects it is also customary for the article to be anonymized before the review in order to increase the objectivity of the procedure: In such double-blind reviews , none of the scientists involved knows the identity of the others; these are only known to the editors.

The advantages of the peer review are an overall significantly higher quality of the work and generally understandable formulations. Disadvantages are the high effort and long duration of the review process, sometimes the more frequent rejection of unusual or very innovative research approaches if a few experts dominate a subject and therefore repeatedly act as reviewers.

If an article is based on the written version of a lecture (for example at a specialist event or a symposium ), one speaks of an " Invited " or " Presented Paper " in international parlance . (This is especially common in the natural sciences.) After a positive review, a contribution is called a Reviewed Paper . Especially when it appears in a particularly respected journal, it contributes considerably to the reputation of a researcher.

The preprint of an individual article is called a preprint , whereas a (subsequent) individual print is called a separate , offprint or special print . With traditional journal publications, the authors usually receive 20 to 30 free offprints as specimen copies, among other things for scientific communication with colleagues. The "proofs" that used to be used for correction purposes have become rarer today as electronic publication is gaining in importance.

The increasing number of electronic publications in some subject areas has recently led to an increased call for Open Access - free, free access to scientific literature on the Internet . See the article magazine crisis .

The first journals are the " Journal des sçavans ", first published in Paris in January 1665, and the London " Philosophical Transactions of the Royal Society " from the same year.

Nature and Science are international scientific journals with an outstanding reputation and influence. There is nothing comparable in the humanities and social sciences, where no such interdisciplinary periodicals have been able to establish themselves. Rather, an often barely manageable number of often very highly specialized magazines dominates the market.

In German-speaking countries, the magazine Spektrum der Wissenschaft (see Scientific American ) is geared towards popular science and thus stands between the specialist magazine and the general-interest magazine ; it does not serve to publish new results, but to disseminate the current state of knowledge on certain topics to an interested public. The authors are often scientists who summarize their research results in the most understandable way possible.

Scientific journals are traditionally distributed via the model, according to which libraries have subscriptions to the journals that have to be renewed annually and then make these available to their users free of charge. The prices for subscriptions result on the one hand from the production expenditure and on the other hand from the number of financially strong subscribers.

Until the advent of the Internet, they were mainly distributed in print form, but many scientific journals are now also published as parallel online journals (possibly: Online First ) or as e-only versions (see electronic journal ).

Scientific journals are mainly held by university or institute libraries at universities and are available to their users as a printed version in the reference inventory or as an electronic version at PC workstations for reading. Older years are usually archived in bound form by year, so that access is still possible after years. The academic libraries also organize access to the online versions. This is usually done via license agreements, according to which the library enables its registered users or a specific IP range (e.g. via VPN ) to access the journal. Depending on the contract, libraries can electronically archive older volumes themselves and continue to allow access to them.

Free access to hundreds of scientific journals is possible for people living in Germany via the system of national licenses. A free registration is sufficient.

Many publishers charge high prices for trade journals, although many studies are paid for by taxpayers. Great Britain announced in 2012 that it would make research freely accessible by 2014. All publicly funded scientific studies should be freely accessible to researchers, students and the general public.

The European Union is also planning a corresponding move. In science, criticism of the power and business model of large science publishers is increasingly being voiced.