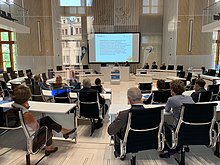 A conference or congress is a gathering of people who work on a specific topic. Both terms are often used synonymously; A congress, however, is an event lasting several days with numerous participants, while the conference (according to the name) is usually one day and can have a smaller group of participants. Also common names are conference , symposium , and for special professions the convention . Conferences are part of the MICE sector (meetings, incentives, conventions, events) in the tourism industry .

The different naming of meetings, conferences etc. deals with u. a. the Munich scientist Eberhard Gugg in his work Der Kongress-Reiseverkehr (1972). It breaks down the variety of related expressions such as

in the following 5 main groups:

¹) In addition to the major events are still concepts such as General ( english General Assembly, General Session ) Annual Meeting and to perform similar. ²) Today's language usage differs in (3, 4): The term conference can also be a small meeting (see for example conference and tutorials), while symposium is mainly used for particularly representative, mostly larger events than oe.

Scientific conferences or symposia of research and specialist societies usually last several days. If it is an annual event, it is often referred to as an annual meeting (see also General Assembly ).

The reason for participating in conferences or congresses does not have to be solely to keep up to date on a topic. Rather, a conference is often used as an opportunity to get to know new people and thus establish and maintain social contacts . For some professional groups, regular participation in conferences is also required by law.

For the technical preparation of a conference, a committee of proven experts and umbrella association chairmen is usually formed. It is often referred to as the Scientific Organizing Committee or SOC and, depending on the interpretation of the conference, is composed either from the regional language area or internationally.

The local organization, on the other hand, is carried out by a Local Organizing Committee (LOC), which mainly consists of the organizer's staff and younger scientists. Among other things, it is responsible for the on-site infrastructure , the conference papers and the conference office.

The papers submitted for the lecture (see English Call for Papers ) are mostly subjected to a technical assessment today, for which the expert commission often also uses external reviewers . The submitted “oral presentations” ( time slot for large conferences around 15 minutes) often have to be redirected to poster sessions for reasons of time . Although posters are generally seen as less significant, they are generally not reviewed if they are for several authors.

The more participants there are, the greater the risk of the lack of efficiency of the talks. Moderation and a tight agenda are required to maintain efficiency . According to the "two-pizza rule" of Amazon's Jeff Bezos , the maximum is eight people.

In addition to the specialist lectures and accompanying activities, almost all conferences offer other events such as specialist excursions and social events. These often include:

Since the Local Committee (LOC) of a conference is usually responsible for the local infrastructure and information , it has to remain active for a few weeks after the conference. Important tasks include:

The conference proceedings (increasingly under the name Proceedings ) are mostly edited by an editor's committee, which is usually headed by the chairperson of the SOC.

With unconference , ad hoc non-conference or barcamp a conference, a convention or a conference is called, which develops in a conscious shift away from traditional forms of organization without pre-specified topic and without separation between audience and speakers.

The idea goes back to an observation by Tim O'Reilly in 2003. He found that the coffee breaks are by far the most productive phases in traditional conferences. Thus he declared the breaks to the actual conference and in 2005 launched the first “FooCamp” (Friends Of O'Reilly) at Socialtext in Palo Alto as an ad hoc non-conference. This was designed by the participants completely in self-organization without any specifications in order to learn and share knowledge in an open, non-discriminatory environment. The organizer only provided the rooms, the infrastructure and the catering for the participants.

There are four basic rules for unconferences:

This has resulted in a large number of formats for unconferences around the world, for example: