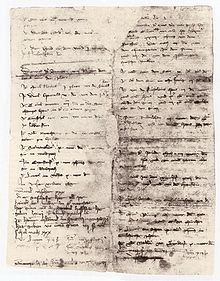 Historical example: An income statement from the Wels Bruckamt from 1350

Billing is a general term that occurs in many specialist areas and has a final invoice as its content.

Accounting means giving an account of the expenses and / or income . Settlement is the arithmetic determination and accountability of the results of a transaction or asset management . In colloquial terms, billing has become established in many matters of daily life. Services provided are billed , as are claims or liabilities in general, for example in the case of claims for damages . When calculating claims in an insured event, one speaks of a settlement on the part of both the policyholder and the insurer .

Billing is often incorrectly used as a synonym for billing . This is offset by comparing a claim with a corresponding liability; the sum of all claims less the sum of all counterclaims result in the claim . With this settlement, all considered (offset) claims become invalid, they are considered fulfilled. Another form is offsetting , a fulfillment surrogate regulated in § 387 BGB .

In the following areas in particular, it is a question of billing:

The Hamburg accounting was organized like the nationwide LZB accounting. It was an independent institution of the most important Hamburg credit institutions, which merged in the legal form of an unregistered association ("Große Abrechnung" or "Hamburger Abrechnung"), in which the LZB Hamburg was only an equal member. Due to the increasing number of electronic payments , it was decided to close the Hamburg account in June 1997.
Today's special forms of accounting are clearing , current accounts , netting and discounting .

The billing should at least be in text form and the billing components should be clearly displayed so that the billing recipient can understand them.

In a figurative sense, the term billing is used, for example, in the phrase “I'll still settle accounts with you” when one party sees itself being taken advantage of by another and would like to suggest that it is working towards compensating for the advantage.

If a person obtains compensation for himself by force - i.e. usually illegally - or with the help of others, this is also called accounting. This form of reckoning is mainly found as revenge , voluntary reparation out of one's own motivation is not called reckoning.