The title of this article is ambiguous. Further meanings are listed under Average (disambiguation) . 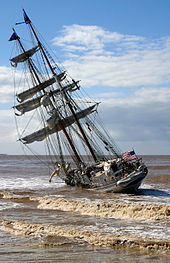 Disaster on the Costa Concordia on January 13, 2012

An average (from Arabic عوار, DMG 'awār  , errors, damage ') is in the shipping a damage that a watercraft or its charge during the journey undergoes. In general, the term also describes any operational disruption .

From the Arabic word “ʿawār” derives the “damaged goods” ( Arabic عَوَارِيَّة, DMG ʿawārīyya  'goods damaged by sea water'), which came to Italy through sea ​​trade around 1300. There the average ( Italian avaria ) was considered a ship accident . The word spread across Europe from Genoa. In Germany it was translated with the now no longer in use word “Haferei”, from which the accident was derived in many languages ​​( Dutch averij, haverij ), for example Central Dutch haverije , averije , Swedish haveri , Portuguese avaria , French avarie . However, it is unclear whether this word itself comes from the Romanesque-French havre (port) or was formed from Haff through formation with the final syllable -ei . (Comparable: "Gasterei" for a meal, as in the title of the Grimm fairy tale Die wunderliche Gasterei ).

According to Herodotus , during the first Persian expedition under Mardonios in 492 BC, the accompanying fleet lost almost 300 ships in a storm while circumnavigating the Athos peninsula . The largest shipwreck in history is the storm-related destruction of almost 300 ships in the Roman navy in 255 BC. After the sea ​​battle at Cape Bon , which were on the way back from Africa to Sicily. Allegedly about 100,000 men perished. Tacitus reported that in 16 AD on the way back from the mouth of the Rhine to the Ems, the majority of the 1000 ships got caught in a storm surge, and described the fleet as lost.

A typhoon in 1274 killed over 10,000 soldiers - and thus a third of the first Mongolian-Korean armed force of Kublai Khan - off the islands of Kyushu and Tsushima . On December 25, 1492, the Santa Maria ran into a sandbank near Hispaniola and could no longer be saved. In November 1511, the flagship of the Portuguese naval commander Afonso de Albuquerque , the Flor de la mar , filled with valuables on the way back from Malacca to Goa, ran into a reef in the Strait of Malacca and sank. The English warship Mary Rose sank in July 1545 with no enemy action had been changed so unfavorable as the focal point of the ship after numerous conversions that after a turning maneuver list was given and through the portholes flowed water. Around 40 of a total of 130 ships in the Spanish Armada were lost in June 1588 in a series of shipwrecks, especially along the coasts of Scotland and Ireland , after the attempt to invade England had been abandoned.

The Batavia of the Dutch East India Company ran aground in June 1629 as a result of a navigation error on a reef near the west coast of Australia. An Anglo-Dutch naval association under the command of Admiral Sir Francis Wheler with a total of about 85 war and merchant ships got into a severe storm off Gibraltar in March 1694 , 13 ships were lost. The sinking of the silver fleet in July 1715 with about 7 million eight-real silver coins, gold and silver in bars, as well as precious stones and other valuable trade goods from East Asia and America, was due to a hurricane on the Florida coast near Fort Pierce , which carried the ship through the Surf smashed.

On June 15, 1904, the General Slocum caught fire and sank on the East River in New York . With 1,021 people, it had the most deaths in civil shipping to date. This was surpassed by what is probably the most famous shipping accident on April 14, 1912, when the Titanic collided with an iceberg on its maiden voyage about 350 nautical miles SSW east of Newfoundland and sank. Of the 2,207 people on board, only 711 were able to save themselves. On May 29, 1914, the Empress of Ireland sank after a ship collision in the Saint Lawrence River , killing 1,012 people.

In the two world wars there were numerous accidents between warships and through sinking of merchant ships . So sank in May 1942 during the backup of the Allied convoy PQ 15 of the zigzag courses propelled destroyer Punjabi , rammed in dense fog through the British battleship King George V .

Ferry gaps with many dead dominated the period after the Second World War. When the Filipino ferry Doña Paz sank on December 20, 1987 , 4,386 people died. The Italian cruise ship Costa Concordia attracted particular media attention when it drove a negligent course close to the shore near the island of Giglio on January 13, 2012 and hit a rock off the island, killing 32 people. The captain Francesco Schettino left the ship prematurely . The refugee boat accident in September 2014 is representative of the more recent development of accidents in which refugees cross the Mediterranean with boats, some of which are unseaworthy , and therefore get into distress and are rescued in this way by sea ​​rescue .

The average is regulated in the German commercial law of the HGB , whose maritime trade law was internationalized in April 2013. Colloquially, every shipping incident listed in Section 537 No. 5 HGB is an average, namely the shipwreck , capsizing , collision or stranding of a ship, an explosion or a fire in the ship or a defect in the ship. In terms of commercial law, however, a distinction is only made between a ship collision and the “major average”. Both the damaged watercraft and its owner or passengers are referred to as the damaged vessel (s) .

Ship collisions are initially regulated by law in § 570 ff. HGB, according to which the shipowner of the ship is liable for the damage that caused the collision. The prerequisite is the shipowner's own fault , who has to bear the personal injury and property damage caused by the collision with the other ship . The provision takes into account the international convention for the uniform determination of rules on collisions between ships .

The legal term for average is "average". According to Section 588 (1) of the German Commercial Code (HGB), the “general average” is important if the ship , its accessories , fuel or cargo are deliberately damaged or sacrificed to rescue from danger by order of the captain ( sea ​​litter ). The damage is to be borne jointly by the shipowner, the freight debtor and the owner of the cargo. In this case, it is taken into account that the parties involved regularly agree to the application of the York-Antwerp Rules (YAR) in the sea ​​freight contract , bill of lading or the charter lot and that statutory regulations are used in exceptional cases. If there is a "major average", the parties involved have to jointly bear the damage and expenses incurred as a result of the "major average". The regulations on "special average" (§ § 701 , § 704 , § 705 , § 707 HGB old version), "improper average" (§ § 635 , § 732 , § 733 HGB old version) and the “small average” ( Section 621 (2) HGB old version ) are no longer applicable because these legal institutions have hardly played a role in practice. It can be assumed that typical cases of “great average” in the future will continue to be the throwing of cargo overboard (sea litter), the lightening of cargo, the deliberate stranding of the ship and the defense against pirates .

The Maritime Safety Investigation Law (SUG) defined for purposes of occupational safety and health of workers on seagoing vessels and environmental protection in § 1a no. 1 SUG the maritime accident as an event that death or serious injury of people, the disappearance of a person from boarding a Ship, the loss or abandonment of a ship, property damage to a ship, the runaway or shipwreck of a ship or the involvement of a ship in a collision, property damage caused by or in connection with the operation of a ship, or environmental damage as a result of a results in damage to one or more ships caused by or in connection with the operation of one or more ships.

In inland shipping , the HGB regulations on “general average” apply accordingly in accordance with Section 78 (1) BinSchG .

Under insurance law, average is a marine accident caused by collision, grounding or an event that causes damage to the ship through internal or external circumstances. Pursuant to Section 130 Paragraphs 2 and 3 VVG , the insurer is liable for the damage suffered by the policyholder as a result of a collision between ships in inland waterway transport ; the insurance against the dangers of inland waterway transport includes the contributions to the "general average", insofar as the average damage should be averted by the insurer. This provision of § 130 VVG is not applicable to the maritime hazards of shipping ( § 209 VVG). The damage from the major maritime accident is offset in the average , in accordance with § 30 ADS .

The prerequisite for seaworthiness has a direct impact on the liability and insurance issues of a shipping company. Under insurance law, the ship must be able to withstand the dangers inherent in the normal course of shipping. This includes not only the structural and material condition of the hull and the functionality of the main and auxiliary machinery, but also the good condition of the required facilities and equipment, the type of loading, the availability of the required crew and the necessary documents.

The general average is the pecuniary settlement of an accident.

Disasters outside of shipping

In Germany there are average agents that traffic accidents in road traffic study with high harm. In Austria in particular , people also speak of damaged vehicles in road traffic, especially in the case of total write-offs , damaged vehicles or averages. The breakdown service was in the GDR and is sometimes still referred to as "average service" , especially in Vienna .

In common usage, the term accident for total damages or accidents on or in industrial plants , buildings , Server equipment used and the like. It has meanwhile become a synonym for an accident on a large scale or with major consequential damage. It is also used for accidents in the reactor area of nuclear power plants . Examples are the accidents at the Chernobyl , Gundremmingen A and Fukushima I nuclear power plants . Sometimes one also speaks - incorrectly - of colliding celestial objects of an accident.