This article is about the floating ice sheets; further meanings under iceberg (disambiguation) .

Icebergs are large masses of ice floating in the sea .

Most of the icebergs in the North Atlantic come from Greenland , while those in the southern oceans mostly come from Antarctica .

They generally arise when large pieces of a glacier or ice shelf break off; the glaciers calve . Icebergs consist of fresh water with air pockets. They can also form from piling up pack ice and ice floes ; they then contain small amounts of sea ​​salt . Due to the density anomaly of water is that in the solid state of aggregation less dense than the liquid. Because of the slightly lower density compared to the surrounding water , only about a seventh of its mass protrudes above the water surface.

Generally, icebergs are white. The white color is caused by the reflection of the light on the air enclosed in the ice. They are often streaked with blue veins with clear ice. This ice is meltwater that has penetrated crevasses and later frozen again. Occasionally so-called green icebergs also appear. These are overturned icebergs that were overgrown with algae on the underside. The greenish organic material creates a corresponding color.

Icebergs last around three years on average, particularly large specimens up to 30 years. They can have an area of ​​over 10,000  km² . The currently largest documented iceberg, an Antarctic tabular iceberg, was sighted in the South Pacific in 1956 and was initially 31,000 km² in size. A well-known example of a giant iceberg is B-15 with an original area of ​​about 11,600 km². This emerged in the Ross Ice Shelf in 2000 and broke into several parts in 2002.

An iceberg running aground and thus is stationary over long periods of time, ice island ( English ice Iceland called). In contradiction to the word component, this is not an island . Well-known examples are Pobeda in Antarctica or the ice island near Ward Hunt Island in the far north of Canada . Such ice islands can last for years until the iceberg has melted so far that it comes free again and drifts away. Occasionally, particularly large free-swimming icebergs are referred to as ice islands.

Icebergs that arise from ice shelves are relatively flat and are therefore called table icebergs . They form the largest icebergs and are typical of the Antarctic . The maximum measured length is 300 km. The ratio between height and draft is 1: 7.

Summit icebergs arise in the Arctic Ocean and have their origin in the glaciers of Greenland. They can reach a height of up to 215 m. The ratio between height and draft is 1: 5. 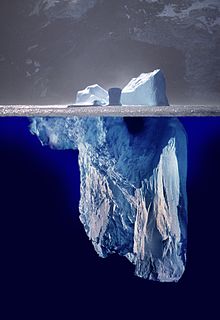 85% are under water, as in this photo montage ; sometimes with long spurs

The Russian poet, natural scientist and polymath Mikhail Lomonosov explained icebergs scientifically and correctly for the first time around 1750: Since the density of ice is 0.920 kilograms per liter (seawater 1.025 kilograms / liter), 90% of the volume of the icebergs must be below the surface of the water . The specified average values ​​can vary slightly depending on the salinity and water temperature. In the case of an iceberg, the amount of air inclusions is another variable. Lomonosov grew up in northwestern Russia on the White Sea , where he learned the basics of seafaring, navigation and meteorology early on. Later he studied in Marburg , which is probably the reason that he coined the word Айсберг (transcribed Aisberg ) in the Russian language .

Most of the iceberg is under water and is therefore invisible to the skipper - only the proverbial “tip of the iceberg” is visible. The main part (“keel”) lying under water can be extended in the horizontal direction, which can lead to misjudgments. That is why ships must keep a clear safety distance. The largest iceberg-related shipwreck was the sinking of the Titanic in April 1912.

As a possible consequence of global warming , icebergs are breaking off from the glaciers of Antarctica and from the mainland on Greenland in larger quantities than before , causing sea levels to rise globally.

Depending on their size, icebergs can also occur in subtropical zones . They pose a threat to shipping and are monitored by satellites and aircraft . Icebergs can also reach the sea floor and damage pipelines and underwater complements for oil and gas production as they move . That is why such systems are buried if necessary to protect them from icebergs.

The monitoring of the movement of icebergs to secure shipping in the North Atlantic is carried out by the International Ice Patrol organization. In the Southern Ocean , this task is carried out by the American National Ice Center . This organization also gives names to icebergs that are larger than 10 nautical miles (diameter in any direction). The name is composed of a letter for the area of ​​origin and a serial number in chronological order. The letters indicate the quadrant where the iceberg was first discovered, as follows: