from Wikipedia, the free encyclopedia
This is the spotted version , flagged on January 7, 2020 . There is 1 pending change that has yet to be viewed. 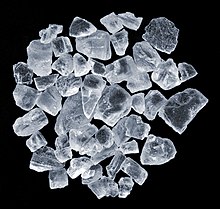 Sea salt is from brine in salt pans obtained or by other methods salt . Contrary to its name, sea salt is not always separated from sea ​​water , but can also be added to the water of salt lakes , i. H. naturally salty inland waters .

In addition to sodium chloride , sea ​​salt also contains traces of other substances , including salts of potassium , magnesium and manganese . Rock salt is nothing more than sea salt, which was created millions of years ago through natural evaporation and the resulting concentration of the seawater of entire inland seas or constricted inlets.

Sea salt at a salt garden in Walvis Bay . The red color of the water is caused by halophilic organisms.

The sea salts have their origin in rock weathering . Through rainwater , the anions and cations get into the groundwater , into the rivers and finally into the sea. The salt is dissociated in the water, i.e. split into ions. The salinity in sea water is around 3.5 percent, 1000 grams corresponding to 976 ml of sea water thus contain 35 grams of salts. The Baltic Sea contains an average of 0.8 percent, the North Sea 3.0 percent, the Mediterranean 3.8 percent and the Dead Sea 28 percent salts. 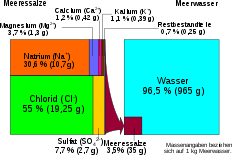 On warm coasts, sufficient salty water is traditionally channeled into artificially created shallow basins or shallow lakes, the salt marshes . These basins often show an intense red to purple color due to salt-loving, halophilic bacteria. As the water evaporates under the influence of the warming sun and moisture-absorbing wind, the salt concentration of the remaining liquid (brine) increases. With increasing concentration , this is passed on until the crystallized salt layers remain by removing the residual water or drying it out . The salt farmers “harvest” these mechanically or manually and store them in piles. Sea salt accounts for an estimated 30 percent of world salt production, the rest is rock salt . 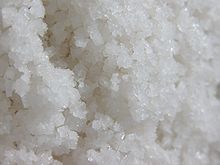 Fleur de Sel ( French , Flor de Sal Portuguese , Spanish , Fior di Sale Italian ) is the most expensive sea salt. It only arises on hot and windless days as a wafer-thin layer on the water surface and is skimmed off by hand with a sieve shovel. In France, it is found in Brittany ( Guérande ), the Pays de la Loire ( Île de Noirmoutier ), the Charente-Maritime ( Île de Ré ) and the Camargue , in Portugal on the Algarve , in Figueira da Foz and in the Aveiro area won. Fleur de Sel also comes from Spain, from Alicante ( Marina Alta ) and Ses Salines on Mallorca , as well as from the Sečovlje salt flats in Piran in Slovenia and those of Trapani on the west coast of Sicily . Fleur de Sel has also been produced in the salt marshes of the Atlantic coast of the Brazilian state of Rio Grande do Norte since the early colonial times . The salt flower consists on average of over 97% sodium chloride, 0.5% calcium sulfate , 0.3% magnesium chloride , 0.2% magnesium sulfate ("Epsom salt") and about 0.1% potassium chloride , the rest is remaining water.

The gray salt (sel gris) is skimmed off below the salt flower . Suspended solids from the alga Dunaliella salina and sediment particles are trapped in the salt crystals . These substances, carried in from the subsoil of the basins in the salt marshes, give this sea salt a gray color. The algae and the suspended clay particles result in a higher proportion of silicates . Sel gris has a high level of residual moisture and must be crushed in a rust-resistant salt mill or mortar .

Sea salt is preferred by some chefs because of the supposedly better taste or the special structure of the crystals. From a nutritional point of view, however, there is no justification for preferring sea salt, because like other table salt it consists of 95 to 98 percent sodium chloride and only contains small amounts of minerals, but up to 5 percent water as residual moisture. Contrary to other advertising statements, it hardly contains any iodine or iodide . In contrast, the content of minerals and trace elements is very different depending on the product, but usually so low that a salt consumption of two to three grams per day (about half a teaspoon) cannot make a significant contribution to meeting the needs. This also applies to iodine, if it has not been specifically added .

Regardless of the place of origin, microplastics are found in commercially available sea salts . A study published in 2017 looked at 17 brands of sea salt from 8 different countries. No microplastics were found in just one brand. The other brands contained between 1 and 10 microplastic particles per kilogram. As the origin of microplastics in human food, sea salt probably plays a subordinate role, if only because of the comparatively very low intake of pure salt per day.

Sea water droplets are sprayed by wind, waves and burns, which as aerosol are tolerated by the wind, the smaller (and lighter) they are. In dry air, for example over sun-warmed land, these salt water droplets can also dry into salt particles. These natural aerosols are used in seaside resorts for healing purposes, similar to those from ultrasonic nebulizers . Inhaled, the salt air brings relief from various ailments such as asthma .