Italian is a redirect to this article. Further meanings are listed under Italian (disambiguation) .

Italian (Italian lingua italiana , italiano [ itaˈli̯aːno ]) is a language from the Romance branch of the Indo-European languages . Within this branch of language, Italian belongs to the group of Italian-Romance languages .

Italian is spoken as a mother tongue by around 65 million people worldwide . In addition to Italy , the Italian-speaking area in Europe also includes areas of neighboring Switzerland. As an official language, Italian is also widely used as a second and learned foreign language among the numerous ethnic groups and linguistic minorities in Italy: the Germans and Ladins in South Tyrol , the Slovenes in Friuli-Venezia Giulia , the Franco-Provencal regions in Aosta Valley and the Occitans in Piedmont , the Friulians , the Sardinians , the Albanian and Greek- speaking minorities of southern Italy , the Molises Slavs .

Italian is the official language in the following countries:

Italian is also the official language of the Order of Malta .

Italian enjoys the status of a regional official language in Slovenia and Croatia , in the areas of the historical region of Venezia Giulia . The Slovenian municipalities of Capodistria / Koper , Isola d'Istria / Izola and Pirano / Piran as well as the Croatian County of Istria are officially bilingual.

In the former Italian colonies in Africa , Libya , Somalia and Eritrea , Italian was used as a commercial language alongside English , but has lost much of its importance since decolonization: It is mainly spoken or at least understood by the elderly. In Somalia, the 2004 transitional constitution stipulates that Italian should be a secondary language alongside English .

Many emigrants of Italian origin around the world still speak Italian. In Buenos Aires, Cocoliche , a mixed language with Spanish, developed strongly at times .

Italian words have been incorporated into various terminologies , e.g. B. in music , design , technology , kitchen or banking .

Like all Romance languages, Italian is derived from Latin . At the beginning of the Middle Ages after the collapse of the Roman Empire , Latin remained in Europe as an official and sacred language . Latin also asserted itself as a written language . However - even when the Roman Empire still existed - people spoke a form of language that deviated from the written standard and is also known as vulgar Latin or spoken Latin . From this the pro-Romanic vernacular and finally the Romance individual languages ​​developed. New languages ​​emerged in Italy and its neighboring countries, e. B. the Oïl languages in northern France , the Oc languages in southern France and the Sì languages in Italy, named by Dante Alighieri after the respective designation for "yes".

The stages of the Italian language can be summarized briefly in the following epochs:

The first written evidence of the volgare (from Latin vulgaris , “belonging to the people, common”), i.e. the Italian vernacular as the origin of today's Italian, date from the late 8th or early 9th century. The first is a riddle found in the Biblioteca Capitolare di Verona , called the Indovinello veronese ( Veronese riddle ):

The spread of the volgare was encouraged by practical necessities. Documents concerning legal matters between persons who did not speak Latin had to be drafted in an understandable manner. One of the oldest language documents of Italian is the Placito Cassinese from the 10th century: "Sao ko kelle terre, per kelle fini que ki contene, trenta anni le possette parte Sancti Benedicti." (Capua, March 960). The Council of Tours recommended in 813 that the vernacular should be used instead of Latin in preaching. Another factor was the emergence of cities around the turn of the millennium, because city administrations had to make their decisions in a form that was understandable for all citizens.

For centuries, both the vernacular Italian and Latin, which was still used by the educated, coexisted. It was not until the 13th century that an independent Italian literature began, initially in Sicily at the court of Frederick II ( Scuola siciliana ). Writers had a decisive influence on the further development of Italian, as they first created a supra-regional standard in order to overcome the language differences between the numerous dialects. Dante Alighieri , who used a slightly modified form of the Florentine dialect in his works, was particularly influential here. Francesco Petrarca and Giovanni Boccaccio , who, together with Dante, are known as the tre corone ("three crowns") of Italian literature , also had a great influence on the Italian language in the 14th century .

In the 16th century, the form and status of the Italian language was discussed in the Questione della lingua , with Niccolò Machiavelli , Baldassare Castiglione and Pietro Bembo having a decisive influence . A historicizing form of the language that was based on the Tuscan of the 13th / 14th centuries prevailed. Century.

However, the real standardization, especially of the spoken language, only took place as a result of national unification . In the 19th century, the “Florentine” dialect became the standard Italian language in the united Italy. This is thanks, among other things, to the second version of the novel I Promessi Sposi by Alessandro Manzoni . 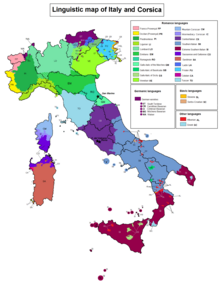 Languages ​​and dialects in Italy

A diglossia is typical for the entire Italian- speaking area : this means that standard Italian is only used in writing and in formal situations, but the respective dialect (dialetto) for informal oral communication . Its spread has only recently declined somewhat, favored by increased mobility and consumption of mass media. Regionally colored varieties of Italian are being used as an intermediate form.

The individual dialects of Italian are sometimes very different from one another; some language varieties are classified as independent languages. All Italian dialects and Romance languages spoken in Italy can be traced back directly to (vulgar) Latin . In this respect, one could - exaggerated - also describe all the Romance idioms of Italy as "Latin dialects".

The Tuscan dialect, in particular the dialect of Florence , in which Dante Alighieri , Francesco Petrarca and Giovanni Boccaccio wrote and from which the high-level Italian language developed, was historically regarded as a prestigious variety . To this day, the term "Tuscan" is sometimes used when referring to standard Italian (as opposed to other Italian dialects).

Some Italian regional languages ​​such as Sicilian or Venetian can also have their own literary tradition (the so-called Scuola siciliana in the time of Frederick II ), which is why these (and other dialects) are also classified as an independent language . Sicilian also has so many peculiarities in terms of sound formation and vocabulary that it is more of a language closely related to Italian (and not a dialect).

From a linguistic perspective, Corsican is also a dialect of Italian, even one that is relatively closely related to Tuscan and thus to today's standard Italian. As a result of the political annexation of Corsica to France in 1768 , however, the linguistic " roofing " by Italian ceased to exist and it is now often treated as an independent language.

The classification of Sardinian , Ladin and Friulian as individual languages (or in the case of the latter two as variants of Rhaeto-Romanic, but not Italian) is now recognized in linguistics. 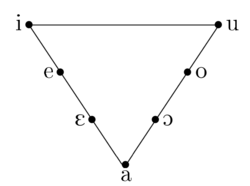 Vowel triangle of the main tone vowels in Italian 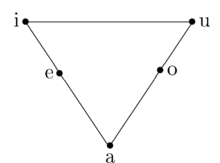 Vowel triangle of the secondary tone vowels in Italian

Italian has 5 secondary tone vowels. The open vowels [ɛ] and [ɔ] are omitted for the unstressed vowels. In comparison to the main tone vowelism (7 vowels), this creates a system with 5 vowels that is reduced in the secondary tone.

A consonant is a speech sound that interrupts or restricts the flow of air when it is formed. Italian has 43 consonants that can be classified by the following articulatory parameters:

The following modes of articulation are important for Italian: plosive , nasal , fricative , approximant and lateral .

With nasals, a seal is formed in the oral cavity so that the airflow escapes through the nose.

Vibrants are sounds that are formed by flapping the tip of the tongue three to five times on the upper tooth dam (" rolled R ").

With fricatives, the airflow is narrowed with the help of the articulation organ. There is a rubbing noise.

Laterals are sounds that are delimited by the edges of the tongue and the molars.

An affrikata is an oral closure sound in which the closure is loosened so far in the second phase that a fricative is created. They are scored either monophonematic (i.e. as one phoneme) or biphonematic (two consecutive phonemes). In addition, a distinction is made between homorganen (formation of the lock and friction with the same organ of articulation) and heterorganen (formation with different organs of articulation) affricates. Affricates in Italian include the sounds [dz], [ts] (homorgan) and [dʒ] and [tʃ] (heterorgan).

The preceding vowel is shortened.

Certain phonemes such as [ʎː], [ɲː], [ʃː], [ts] and [dz] always appear as geminates intervowels, even if they only occur simply in the script. Example:

Relationship between sound and letter

The Italian spelling reflects the phonetic level fairly accurately, similar to the Spanish or Romanian . Today's Italian uses the Italian alphabet , which is made up of 21 letters of the Latin alphabet . The letters k , j , w , x , y only appear in Latinisms , Graecisms or foreign words. The j is sometimes found in historical texts for a double i (which is no longer written today) . In contrast to Spanish, Italian has no continuous marking of the word accent . A grave accent (`) is only used for end-stressed words (example: martedì , città , ciò , più ) - for e , an acute accent (´) or grave accent (`): piè [pjɛː], perché [perˈkeː], depending on the pronunciation . In very rare cases, acute is also used for o . The circumflex is sometimes found in texts to indicate the merging of two i's , for example i principi ("the princes", from principe) as opposed to i principî ("the principles", from principii , from principio) . Other examples are gli esercizî and i varî . For the sake of clarity, the accent is occasionally used to differentiate meanings ( e - "and", è "he is"), sometimes also in dictionaries or on maps.

The letters g, c and letter combinations with sc

The following combinations of letters in Italian spelling are particularly important:

Letter combinations with gl and gn

Half vowels and half consonants as phonemes

With regard to the semi-vowels [i̯] and [u̯] or semi-consonants [j] and [w] that exist in Italian, the question arises to what extent these can be regarded as independent phonemes. Researchers like Castellani and Fiorelli believe that this is definitely the case. The comparison of word pairs in which the vowel and the semi-vowel / semi-consonant appear in the same place is the only way to clarify this question. So serve as examples:

The opposition between the vowel and the semi-vowel / semi-consonant found in these word pairs is offset by the problem of individual language realization. In order to be able to start from the semi-vowels / -consonants as independent phonemes, these word pairs must always be pronounced differently and thus can be understood in their special meaning regardless of the context. However, this cannot be assumed, since the language realization depends on factors such as “speaking speed, individual characteristics or the sound environment in the neighboring word” . In poetry, for example, pronunciation can vary for rhythmic reasons. Based on these findings, researchers like Lichem and Bonfante come to the conclusion that the respective half-vowels and half-consonants in Italian "are in a positional alternation with one another" and "that the Italian half-vowels are combinatorial variants of the corresponding vowel phonemes, i.e. not their own phonemes" .

Tutti gli esseri umani nascono liberi ed eguali in dignità e diritti. Essi sono dotati di ragione e di coscienza e devono agire gli uni verso gli altri in spirito di fratellanza.
All people are born free and equal in dignity and rights. They are endowed with reason and conscience and should meet one another in a spirit of brotherhood.

The following articles deal with the typical mistakes that can occur when learning and translating the Italian language: